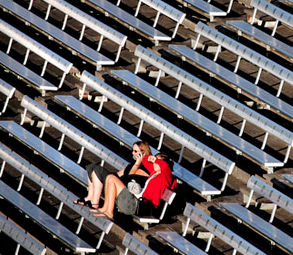 On Sunday, March 31, the Swarthmore Athletics department saw a record-breaking attendance at the Men’s Baseball home game against Bryn Mawr. For the first time in the school’s history, over one-fourth of the bleachers – a whopping 27%, to be exact – were filled by Garnet fans.

“It was phenomenal to witness. It bodes for a hopeful future for Swarthmore Athletics,” Director of Athletics Adam Hertz said.

Despite this monumental milestone, the team dropped the game against the Owls 12-2, after half of the team collapsed in nervous breakdowns, and eventually conceded the game after six innings. Fortunately, no players were hospitalized, and all are expected to resume practice by the middle of the week.

“It was distressing to everyone there – the coaches, the fans, and especially the players. I’m just thankful the players are okay, and recovering quickly,” Head Baseball Coach Matt Midkiff said.

While not every player has undergone complete psychological evaluations, the general consensus has been that the nervous breakdowns were a result of a severe onset of panic attacks,  brought upon by crowd-induced anxiety. According to Jim Milos ’13, who was one of the first players who had to leave the field, playing in front of such a large turnout was a daunting experience for all.

“Never in my four years at Swarthmore have I seen so many people at a game…I had never felt so nervous in my life,” Milos said.

Milos’s teammate, Manny McTahoe ’13, also found it difficult to focus with so many eyes watching them.

“We’ve never had any experience playing in front of huge crowds, so many of us had no idea how to handle the new pressure,” McTahoe said. Although he did not faint during the game, he confessed he was on the verge of collapsing when the team finally withdrew. “My heart was pounding, and my hands were trembling, and I couldn’t breathe properly… I’m honestly surprised I was able to remain standing for as long as I did,” he said.

After this weekend’s incident, the Swarthmore Athletics Department is preparing to enact a new counseling office, which will be geared towards mentally preparing athletes on how to deal with stage fright and other forms of anxiety that could inhibit their performance in the future. This was determined to be the best solution given the circumstances, according to Hertz.

“Obviously, we’re not going to get rid of the fans – their attendance is absolutely vital to promoting athletics on campus,” Hertz said. “So, logically, the next best step is to train our players on how to cope with these new pressures they will be facing.”

As an additional act of precaution, athletic trainers will remain on the sidelines of all games with Prozac, Zoloft, Valium, and antiseizure drugs, in case of an extreme circumstance.

Overall, the players are highly anticipating these new measures being implemented. “We want more fans. We always want more fans,” Milos said. “But if more fans actually start showing up to games on a regular basis, we have to be prepared.”

“As student-athletes, we’re expected to handle any curveball thrown at us. There will always be obstacles that we must face at our times playing sports at Swarthmore, and we’re excited to come together as a team and overcome this one,” McTahoe said.