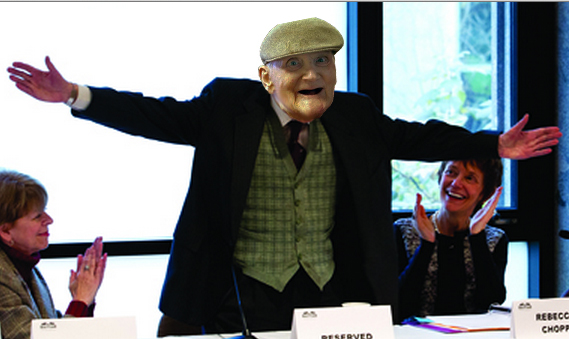 Prominent philanthropist and Swarthmore alumnus, Dr. Ernst Eivhul, MD ‘54 surprised the Board of Managers this weekend with a video message in which he announced that he planned to donate one hundred billion dollars to the College.

“Gentlemen and ladies,” Eivhul said in the recorded message, “you may have noticed that the Strategic Plan is very, shall we say, large. If you want to complete this enormous plan, you’ll have to accept my… one hundred billion dollars!!!”

“Mwahahahaha,” said Eivhul. “No one will ever be able to top my donation. Suck it, Eugene Lang!”

While the Board was initially excited by the news, they quickly grew skeptical of the planned donation. This skepticism was shared by members of the Administration.

“One hundred billion dollars!” exclaimed President Rebecca Chopp, upon receiving the news. “That amount of money doesn’t even exist. That’s like saying ‘I’m going to donate a kajillion billion dollars!”

In a follow-up phone conversation with Emeritus Board Chair Eugene Lang ‘38, the wizened benefactor explained to Eivhul that he would not be outdone. “Now look here Dr. Eivhul,” Lang is reported to have said. “I’m the wealthiest man this school has ever produced and I’m determined to call your bluff. You’ll take back your donation promise and you’ll say you’re sorry.”

“Oh, throw me a friggin’ bone here,” said Eivhul. He later wrote in a letter to the Board that he had decided instead to donate one million dollars.