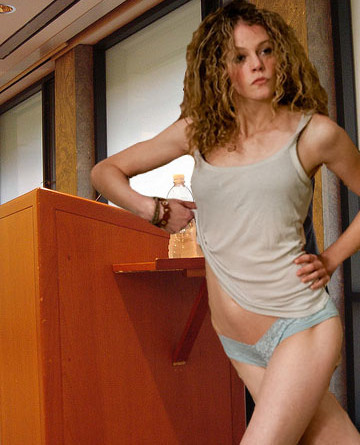 At Friday’s lecture “Symposium on Dyslexic Volunteer Sex Workers: A Conversation with James Thims and Holley Samoht” Rachel Dunling ’15 posed a brilliant question that actually stumped both presenters and made them reconsider their entire life’s work.

“I mean, their response was a little problematic, but I think I really articulated my question well and got the audience thinking,” Dunling said.

Thims and Samoht offered inspiration and hope but also moved hearts about their tragic stories. They spoke of how stigmatized their intersecting dyslexic and volunteer identities are in the sex worker community.

“We are at the crossroads of oppression, and sometimes we can’t even read the street signs,” Thims said jokingly, who said he once spent two hours trying to find 7th & Worrab St on a map to meet a client. “Then I realized he meant Barrow St! I would have offered to give him his money back, but I hadn’t asked him to pay in the first place. I felt really bad.”

Thims and Samoht, who find most of their clients on Grindr and ChristianMingle.com or at Starbucks, subsidize their volunteer work through other jobs. Samoht, a Duke graduate, works as a hedge fund manager on Wall Street. Thimes is a Harvard-educated lawyer. They say they wish they could devote all their time to service others, but have very real bills to pay.

“We find a way to do it because we love the work we do,” Thims said. “But the sex worker community does not like us. They call us ‘sluts’ and ‘whores’ because we’ll take their jobs for no pay.”

At the end of their talk, Thims and Samoht opened the conversation up for questions.

After a couple dumb questions about possible externships and networking opportunities came the most intelligent, meaningful question anyone who was there could ever remember hearing.

“What I find most problematic about the systematic and institutional oppression and subjugation of free sex traders is the problematization of that identity within the scope of a troubled modernist capitalist white hegemonic narrative. I wanted to hear your thoughts about the suppression of volunteer dyslexic identities within this narrative because to me, and I want to complicate this problematized troubled narrative as someone who has volunteer experience and plans to have sexual experience. I mean,” Dunling said, pausing to gather her thoughts. “I mean, in framing this within the context of a generalized subordinated identity with a hope to achieve greater rights for, and you’re a white woman and a man of color so I wanted to touch on how those identities also shaped your experience, greater rights for the institutional changes that have been brought about by, I mean if you think about Foucault’s discussions of sex and politics, he would say something about that and I just wanted to see what your thoughts were because to me that is so interesting.”

“That was a very interesting and thoughtful question,” Thims said in order to buy himself some time. Dunling beamed.

“You know, I don’t think I could have said it better,” Samoht said. “I thought that was a very interesting point.”

Dunling, who left right after she asked her question and was not available to comment in person, did write in an email that she thought their response was problematic.

“I have to say I find it really troubling and problematic that they didn’t really have an adequate answer for me. I mean, if they’re giving a lecture at Swarthmore, they should have thought these things through beforehand. They need to challenge these assumptions and do some work around figuring out what they really mean when they talk about various forms of oppression,” Dunling wrote. “Granted I wasn’t able to hear most of their talk because I’m a triple major in Econ, Bio, and GenSex, and I’m the head of the service group to Chester called Pottery for Poor People, and I’m taking an honors seminar in Biology as a sophomore, and I work at the LRC, but I thought some of the things they said were interesting. I’m just glad I could contribute to the discussion.”