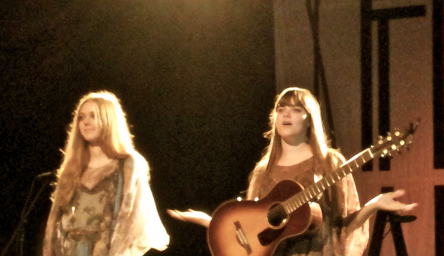 After Big Boi cancelled his contract with Swarthmore to go perform with Macklemore at Williams College, the Large Scale Event (LSE) Committee decided to open their search to a more diverse selection of musicians.

“We were so honored to be chosen to perform at such a great college,” said Sal Malarkey, one half of the Conshohocken-based folk duo, Salt of the Earth, which was chosen to perform. “I’m salt, Sherry’s the earth, if you know what I mean,” Sal explained. “She’s sorry she couldn’t be here, but she’s catching the Indigo Girls in Omaha this weekend. She’s hitching, so she probably won’t be back for a while.” When asked whether Sherry would return in time for their Swarthmore concert, Sal responded: “Oh, I hope so. I honest to God hope so.”

Salt of the Earth got started as “just a couple of gals, strumming together in the local coffee shop.” Sal said she never expected that their success would be this explosive. “I mean, shit,” she said. “One day we’re sharing a mattress and taping my banjo together with tobacco juice and the next we’re playing at a swanky place like Swarthmore.”

President Rebecca Chopp, who often heads out to Conshohocken to get some peace and quiet, happened to overhear Sal and Sherry during one of their first gigs at The Breakfast Nook. “I just thought to myself, ‘wow,’” Chopp said. “These girls have really got ‘it.’” She approached them after their set (which included a handful of Joan Baez and Neil Young covers) and offered them an audition in front of the LSE Committee.

“That really blew us away,” Sal said. “I mean, we didn’t have anything prepared or nothing. So, we spent the weekend coming up with new material. Sherry’s got a gift for titles. My favorite – which we plan on playing at your school – is ‘Two Fish, One Fire.’”

The LSE Committee was duly impressed by the pair. “You know, as a student body, we’re way too into volume and flash,” said one member of the committee who wishes to remain anonymous. “Sal and Sherry are gonna put on this really intimate show – very coffee house, very sixties. They’ll get up there with their flannel and crappy equipment and just kill it. Also, we’re paying them 35 bucks each, so…”

“Oh, don’t forget to write about our merch,” Sal told me, referring to the group’s new line of Salt of the Earth merchandise. “We’ve got mugs, tees, and posters now. But me and Sherry, we’ll sign just about anything.”