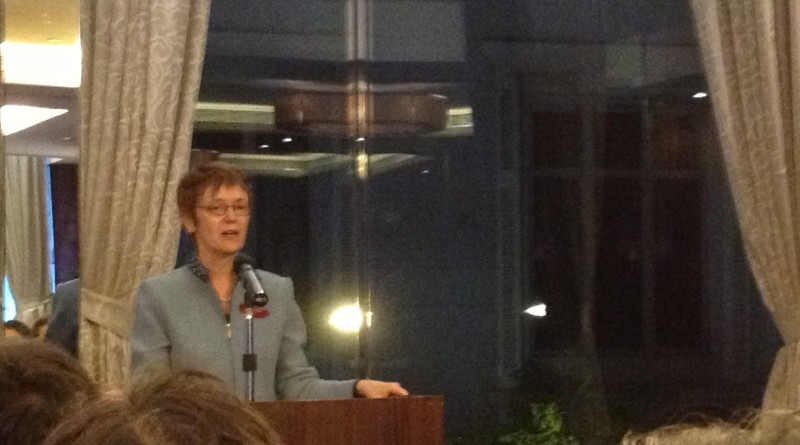 President Rebecca Chopp traveled to Hong Kong, Shanghai, Seoul, and Tokyo this winter break to meet with students, parents, and alumni. According to Chopp, the number of international students from Asian countries at Swarthmore has been increasing over the past decade, making Asia increasingly important for the College’s outreach efforts. In each city, Chopp held an event to discuss Swarthmore’s strategic plans for the future.

East Asia’s representation in the student body has been growing with each incoming class. As of 2011, out of 134 international students from 49 countries, 31 were from South Korea, 19 from China, and seven each from Hong Kong and India, which is a dramatic jump from one, five, four, and one students respectively in 2000. By contrast, non-Asian countries tend to have only one or two students at Swarthmore.

The New York Times’ Hong Kong bureau picked up on the visit, publishing a Q&A with Chopp yesterday. In the interview, Chopp said that the “Liberal Arts [are] going international.”

A reporter from The Daily Gazette had a chance to speak with Chopp at the Hong Kong event.

Chopp believes that a large presence of international students on campus is beneficial for the whole student body. “It’s one thing to read a book about Japan, and a whole other thing to be in a class with someone from Japan,” she said. “For domestic students, to have the experience of those linkages is extremely important.”

Tatsuya Ueda ’16, a student from Japan, agreed, saying he thinks it is important for students “to share cultural views and values.” He said he hopes Chopp’s visit will promote connections.

Chopp explained that, in addition to Asia, she often visits areas with lots of alumni such as Europe. “What these trips are about is relationship-building,” she said.

When asked why Swarthmore and other Liberal Arts colleges are becoming more popular in Asia, Chopp said that “American education has a reputation for driving innovation … our top schools are phenomenal.”

Ueda believes it is significant that the concept of the Liberal Arts is becoming more popular in Asia. “I think Swarthmore’s type of education is really necessary in Japan,” he said. “Japanese universities are more for socializing and having fun, whereas going to an American school is more purposeful.”

Parents also play a big part in the choice to go to a Liberal Arts college. “A lot of our international parents travel to the U.S. anyway,” said Chopp, which helps introduce them to schools like Swarthmore.

“They’ve never seen education like this,” she said. She joked that some parents don’t want to leave after dropping their kids off during orientation.

High-schoolers in Asia find out about Swarthmore through three mechanisms: the web, alumni, and the admissions office, said Chopp. “The web is a great advantage. We get students who reach out first,” she said.

This was the President’s first time going to China on behalf of Swarthmore, but she has visited Asia many times before. She is also involved with the Robert H N Ho Foundation, a charity organization based in Hong Kong that promotes Asian art.