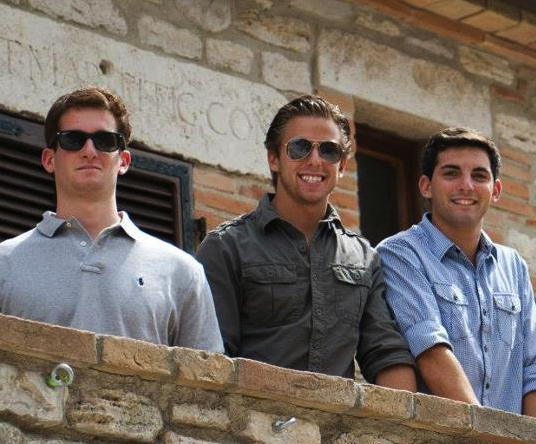 A group of armed and angry soccer fans stormed a bar in Rome last Wednesday, injuring nearly a dozen people. Three of them are Swarthmore students: Nick Burnett ’14, Nick Constantino ’14, and Zachary Schaffer ’14, three of four Swatties participating in an international business program at Temple University’s Rome campus. Burnett was hospitalized, but all three students are expected to make a full recovery.

The incident was described briefly to the Swarthmore community in a Sunday email from Dean of Students Liz Braun, and it has received national media attention. Yesterday the Gazette had a chance to Skype with Burnett, who described his experience during the attack.

Possible motives for the attack remain the subject of an investigation. What is clear is that a group of around forty to fifty locals swarmed the Drunken Ship, an American bar popular with students and foreigners on a plaza called Campo de’ Fiori, last Wednesday night.

The group, armed with various weapons and dressed in black, their faces masked by scarves and some wearing helmets, came running into the bar in what observers and police say was an attack targeted at supporters of the Tottenham Hotspurs, a soccer team based in London. Many of the attackers were supporters of Società Sportiva Lazio, a Roman team that was slated to play Tottenham on Thursday.

But it wasn’t just soccer fans that the group attacked. Burnett told the Gazette that he “didn’t know anything about [soccer] and had hardly even heard of Tottenham or Lazio” before last week.

The three Swatties had only just gotten a table and drinks when they “heard some loud noises and shouting across the piazza,” said Burnett.

“At first we didn’t think they were malicious at all. . . just a little crazy,” he said. “Then, all at once they turned toward us and started running at us, and immediately we knew it was not a good scene.”

The three had chosen a standing table on the bar’s outdoor patio, with Burnett standing outside the patio’s low fence. As a result, they were first in line when the mob reached the bar.

“After they started charging at us, we didn’t have much reaction time,” said Burnett. “I didn’t have anywhere to go except kind of at them.”

He tried to run anyway, but one attacker intercepted him. “He swung at me with what I thought was a baseball bat.”

“I actually had to duck because he would have hit me in the head,” Burnett said.

As the mob entered the bar, Burnett kept running until he had crossed the piazza. When he stopped, he discovered that his attacker had slashed into his back with a knife, leaving a foot-long wound.

“I reached my hand back to feel the wound,” he said. When he removed it, it was “covered in blood.”

A girl offered to help him get to a hospital, and so they flagged a cab. It took two tries—the first cab refused to give a ride to someone covered in blood.

Eventually he was able to call Constantino and Schaffer, who had weathered the attack by hiding behind furniture. Both received minor injuries, but neither was hospitalized.

After approximately ten minutes, the attackers left, throwing tear gas behind them. The Roman police didn’t arrive in time to intervene.

Burnett’s injury kept him confined to a hospital for several days. It was then that he learned the knife had gone deep enough to scratch his lung. He says he may have been the last victim to leave the hospital.

According to NBC news, at least ten people were injured and no one was killed. Burnett said that some people received concussions and multiple people suffered broken bones. One man was stabbed in the groin. “I think he’s doing ok at this point,” Burnett said.

Two of the attackers have been charged with attempted murder. According to NBC news, fifteen suspects have been arrested.

“I’ve been told a lot of things,” Burnett said. “The first thing I heard was that they were all fans of this Lazio team who just really hated these English fans … and wanted to make a statement or something.”

Anti-Semitism has also been raised as a potential explanation. “I heard that Tottenham is from a traditionally Jewish part of London,” said Burnett.

Some witnesses heard the attackers shouting “’Jews’, or something like that,” he said. “I personally didn’t hear anything like that. . .but it could have been an anti-Semitic mob.” He suggests that because the Lazio supporters were joined by supporters of Associazione Sportiva Roma, though the two teams are rivals, it’s likely that their motives transcend mere sports.

“They clearly didn’t care if they got someone who was not Jewish or was not a fan of the team,” Burnett said. “Girls, guys, old or young, whatever. They were going after everyone.”

This incident isn’t the first one on the Campo de’ Fiori. Four years ago, Burnett said, his doctor gave stitches to fifteen patients after a similar attack on the piazza.

One thought on “Swatties Violently Attacked at Rome Bar”