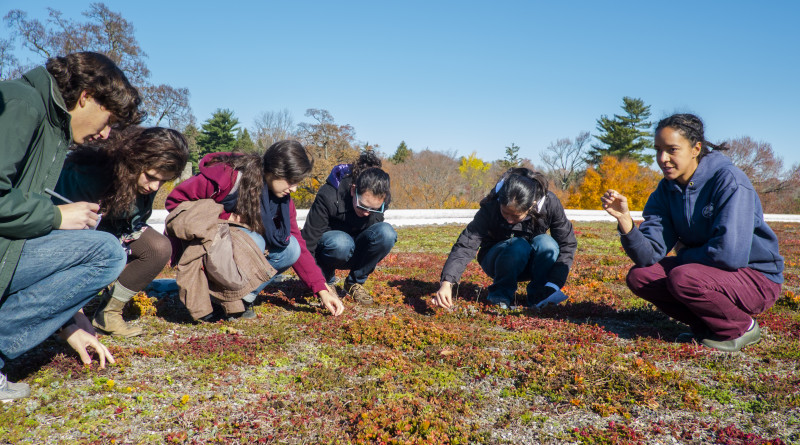 Earthlust is on a mission to get Swarthmore students in touch with their environment. Their main tool will be a series of guided campus tours focused on the natural landscape, the first of which took place on Saturday morning.

“There isn’t a huge connection to [our] natural environment,” Earthlust Coordinator Ben Goloff ’15 said about Swarthmore. He and fellow Earthlust Coordinator Kathryn Wu ’14 organized the tour series around the hope that it would foster a stronger appreciation for the sometimes-forgotten natural elements of campus.

The first tour focused on organic lawn care and green roofs. The tour began at Clothier tower, where approximately ten students had gathered around Nicole Selby ’02, a gardener with the Grounds Department and the co-chair of the Sustainability Committee, who explained some of the College’s environmental practices.

“The transition to organic lawns began two to two-and-a-half years ago [through] a revolving loan for green initiatives,” Selby said. Mertz field and, more recently, Parrish beach have switched from pesticides to organic methods of grass maintenance. Other fields may switch in the future.

The College has been skeptical of the viability of organic lawn care and was worried about brown, uneven grass. However, according to Selby, both fields’ transitions have been successful thus far, and administrators and gardeners alike are pleased.

After hearing about the potential benefits and challenges of organic lawn care and herbicides, the students walked past the new fields to David Kemp, where they toured the building’s green roof. Selby explained that the roof reduces storm run-off and regulates heat levels within the building.

“It was great to finally go up on the AP/DK roof gardens” Frank Sun ’15 said. Alice Paul and Sharples also have green roofs, though they were not included on the tour.

Afterwards, the group moved down into the David Kemp lounge where they enjoyed hot chocolate and apple cider while discussing sustainability on Swarthmore’s campus. “I hope [the tours] will provide entry points for planning about using resources and starting new initiatives […] and will lead to the forming of a more environmentally-engaged campus” Goloff said.