Campus Journal » Around Campus » Abraham opens his Identity, leaves it on “Pavement” 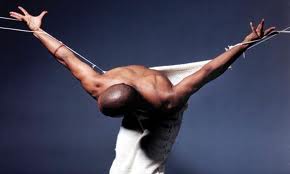 The open stage is set only with a basketball hoop at its back-right corner. The first dancer saunters onstage to the hearty strum of a dusty guitar, stock music that could have been pulled from a Western movie.  The twang of guitar strings reverberate through the auditorium for several minutes and someone a few rows back whispers, “I thought this was a hip-hop show.”  “No, no,” her friend corrects, “this is a modern dance show.”

The music gives way to a recognizably hip-hop beat and the succeeding movements are accompanied by jazz, Motown love ballads, and classical music.  By the end of the Pavement, a new piece by choreographer Kyle Abraham, it was still unclear whether the label of a single genre could encapsulate the variety of movements.

Abraham and his dance company, Abraham.in.Motion, brought movement and techniques to LPAC Friday night that were as varied as the music that accompanied them.  Dancers twirled to Bach with strict form and graceful elongation.   At first this seems at odds with the urban setting the show makes pains to establish by playing recordings of traffic and street life and the affected dialects the dancers employ in the few, brief instances of dialogue.

And these segments of traditional dance would seem odd, if they were not so fully integrated into the performance.  The dancers will use their bodies to speak joy and revelation to the valuating strings of Vivaldi, but then their movement will be disrupted and as they stumble, swirling ballet will fall away to macho, chest-heaving pops to the beats of rap producer Hudson Mohawke.

“He’s kind of the contemporary dance ‘it guy’ in New York and I’d seen his stuff online four a couple of years,” said Swarthmore dance professor Jumatatu Poe.  “I though what he was doing was really exciting: that there were different worlds living inside his body.  The worlds of social dance, in which I include hip-hop, but also the classical worlds learned in the studio.”< Students agreed. “It was a nice break from seeing the story told though hip-hop and rough movement,” said Sebastían Bravo ’13.  “It brought a lot of issues on the table and did it very thoughtfully.” “The idea that you had the gritty fight scenes sometimes set to opera music created this really interesting tension,” said Carmen Smith-Estrada ’14. The piece used fluid transitions between styles of movement to show the emotions that lie beneath the surface of day-to-day life.  A sequence of modern dance wherein two dancers playfully grappled with each other gave way to aggressive, sharp movement when one dancer playfully slapped the other and the movement devolved into a fight. One of the show’s most startling moments began innocently as a dancer asked those passing to lend him a dollar. He asked, “Yo man can you help me out?  I need to get a lottery ticket.  I know it’s my lucky day,” but over the course of a few minutes, his requests became stripped down, devolving into cries of “Help me,” that were ignored by those who passed.  Even more disturbing was the way that this dialogue slipped back into disaffected cadences and he asked, “Hey brother I wanna get a sandwich.  Can you help me out?” “There are moments of it that I still think about,” Bravo said.  “Like the image of the man screaming “Help me,” has really stayed with me.  I don’t want to delve into it too much; it was just beautiful as an image.” As a collection of cathartic moments without an obvious narrative intention, Pavement left audience members with unanswered questions, but not unsatisfied. “While I’m still trying to figure out what the movements meant,” said Smith- Estrada, “I really enjoyed it in that I couldn’t stop thinking about it.  I walked away not knowing what to make of it, but I think the point wasn’t to walk away knowing the plot line.  I think it was all a product of his own identity.” “The way that all these things were juggled and switched back and forth were reflected in [the protoganist’s] everyday life, “ Poe said.  “There’s a lot coming together in his body and I wanted students to see this.”