News » In Spite of Sandy, Crum Regatta Charged Ahead 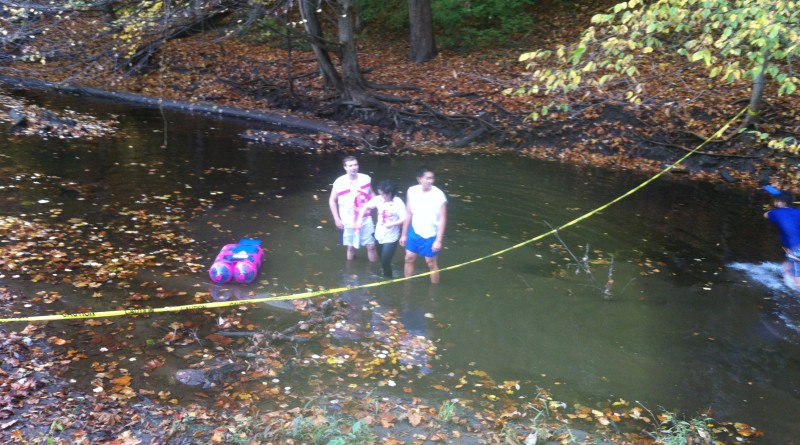 Despite the impending Hurricane Sandy, teams of dedicated Swatties braved the cold last Sunday morning and continued the tradition of the Crum Regatta. In the Regatta’s long tradition and in record-breaking weather, this year’s Regatta carved a small piece of Swarthmore history.

The annual event dates back over forty years, always featuring a variety of boats and other student-built devices racing through 500 meters in Crum Creek. The Regatta is well-known for the unorthodox designs of the floating devices that students use to compete with each other in a cutthroat but often actually rather slow competition. This year, the Regatta ended just  before the Hurricane Sandy forced the College to historically cancel two days of class.

College Registrar Martin Warner, known for his colorful Regatta costume, took up the administrative duties of the race as usual.

“The British Navy Commodore uniform is my inspiration, but I have made several departures from that,” Warner said, “utilizing my son’s elementary school ‘Pirates of Penzance’ Modern Major General medals and epaulets, topped by a two-pointed hat that reminds me of Jean Luc Picard when he pretends to be in the 18th century British navy on the Star Trek holodeck.”

Continuing their first place winning streak was the Bare Bones Crew, comprised of Joe Liang ’13, Eli Siegel ’13, and Jeewon Kim ’13. This was the team’s third year in the race, having competed in 2009 and 2010. The team’s consistent record was slightly thrown off due to the 2011 Regatta’s cancellation (caused by renovation around the creek), as well as the graduation of previous team regular Bill King ’12.

The team’s boat design (water jugs wrapped in duct tape) was a smaller version of their boat in the 2010 Regatta, “which we won by a narrow margin,” Siegel said. By cutting down on size, they were able to maximize their speed.

“This year, by using only 4 jugs in a 2 by 2 position, the boat was lighter. Since our basic strategy was to have [Kim] lie on the jugs while Joe and I pulled on the sides sprinting, the lesser weight of the boat allowed us to go faster and win by a wide margin,” Siegel said.

Though they’ve won first place two years in a row, the team was also hailed for its creativity in 2009. “Our first year we used a design composed of Iced Tea Jugs and although we didn’t win, we won best costume,” Siegel said.

“The students’ crew costumes are often wonderfully ridiculous; I love them all,” Warner said.

Though many other teams this year used the “empty jugs” model, Siegel said he believes that their victory was won largely by their light-weight approach to craft design. “At the beginning we knew we had a good shot since all the other boats looked too big to go fast, especially in comparison to our small boat,” he said.

Regardless of winning or losing, many Swarthmore students look forward to the Crum Regatta as a time to celebrate playfulness and friendly competition. In spite of the looming hurricane, Swarthmore managed to continue its tradition with gusto and determination.

As for Warner, though, he loves the Regatta “because it is just for fun.”