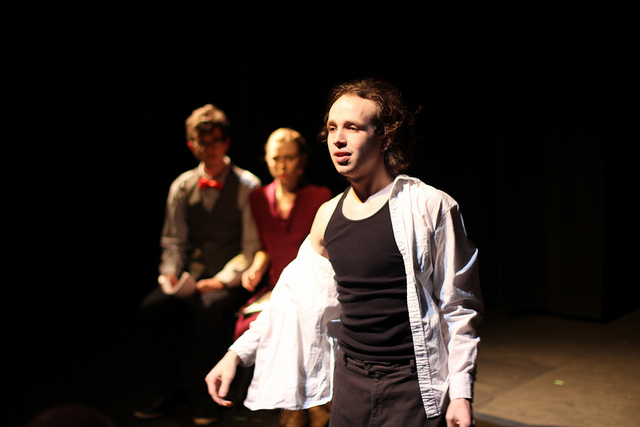 What could possibly unite a pre-WWI Russian male ballet dancer and an American Depression-Era Southern woman? In Kari Olmon ’13’s Senior Honors Dramaturgy Thesis The Intense Fragility, being performed in a stage reading this weekend, the answer is not so farfetched as it seems.

Meet Vaslav Nijinsky, a celebrated Russian ballet dancer living in Switzerland at the end of World War I. He keeps a diary for six weeks as his madness spirals further and further toward what will eventually become full-blown schizophrenia.

What better way to put these two historical characters (and caricatures) in conversation with each other than through dramaturgy? Taken from primary source documents such as Nijinsky’s diary and the canon of Tennessee Williams, Olmon’s play introduces to each other these fantastical, yet incredibly human, historical personas . On Olman’s stage, through the power of death and despair, Rose Williams and Nijinsky somehow find each other through time.

For Olmon, these characters have taken on a new existence as she’s traced their illness and lives through history, through interpretation, through playwriting, and finally, this weekend she will be able to see these characters truly come to life on the stage.

“The past four weeks have been about seeing the play itself take on a life on its own,” Olmon said, “as opposed to when it was me sitting in a room with a pile of books.”

That pile of books has provided Olmon with a wealth of information on Nijinsky and Williams. Her challenge lay at the intersection of history and dramaturgy, in deciding how much to interpret her vast array of sources. Olmon’s texts ranged from multiple versions of Nijinsky’s diary, some of which were grossly edited and romanticized by his wife; first-person accounts of Nijinsky’s life from his wife, Stravinsky, and other dancers; as well as the massive volume of Tennessee Williams’ works and first-person accounts from family members and friends.

Among the most influential pieces for Olmon from Williams’ canon was a little-known one act play written just before Williams’ death and only recently published, called A Cavalier for Milady. The play, Olmon said, “imagined an encounter between an apparition of Nijinsky and a woman who seemed to bear a resemblance to his [Williams’] own sister.” From that play, Olmon drew the premise of Rose Williams and Nijinsky’s interaction.

The rehearsal process this semester was short and sweet: a brief six weeks with over 30 hours of rehearsal time crammed it. Now, as the staged reading performances approach, the actors have become more comfortable with the material and their hard work has begun to pay off, Olmon said.

Watching The Intense Fragility transition from primary document to play to stage was “terrifying,” Olmon said. The rehearsals for the staged reading have, however, shed new light on Olmon’s dramaturgy process.  “Hearing the words in the mouths of actors changes way I think about them, [and] the way I rewrite and add new material,” she said.

Olmon recognized the challenge for actors in staging a reading of a changing script. “[T]he emphasis is not on finding a character and making personal or specific acting choices,” she said. “It’s about expressing the text as clearly as possible. It forces them to roll with whatever I throw at them.”

For example, Olmon cited Meryl Sands ’13 (Rose Williams’ mother) as particularly influential for the way she altered the characters. Olmon had originally depicted the mother as “harsh and shrewish with almost no redeeming characteristics.” Watching the role acted, however, allowed Olmon to give her greater dimensionality: “I watched [Sands] working with it, saw [her] trying to find humanity and sympathy within this really unpleasant woman,” she said. “Thanks to [Sands’s] contribution, I was able to add more depth and backstory to character of mother.”

Sam Swift Shuker-Haines ’13 (Nijinsky) has taken his innovation as an actor one step further, Olmon said, choreographing actual ballet numbers where the script has allotted for “Nijinsky dancing.” “[Shuker-Haines] took it upon himself to do some research and craft these moments that fit really well into narrative,” Olmon said. “The work [Shuker-Haines] did on the dances and character will be important to me going forward with the text later.”

“[It’s] awesome to see the actors start to run with it,” Olmon said. “Even though they can’t do it, they’re having impulse to get off book, they’re making choices, injecting a lot of life and energy into script that we weren’t able to do when I was handing them new pages every day.”

Olmon has been crafting The Intense Fragility since her research began last winter break. She has now spent almost a year researching and writing; undergoing advising (by her thesis adviser Visiting Assistant Professor James Magruder) and revising.

“[Magruder’s] incredibly insightful feedback helped me wrangle the script into a form I wasn’t too ashamed to go into rehearsals with,” Olmon said. She worked closely with Magruder and her director, Walter Bilderback (acclaimed dramaturg of Philadelphia’s Wilma Theater). “To be advised and directed by those two, I was in very good hands,” she said.

Olmon estimated that she is currently working in her seventh or eighth draft of the script. She is nearly ready to draw this leg of her work to a close. Yet, if A Cavalier for Milady was the beginning for Olmon, there certainly doesn’t appear to be a definite ending.

“I definitely don’t see the staged readings this weekend as end of [the project],” Olmon said. “I have every intent to continue revising it, based on how they go and feedback I get from the audience and actors […]. In the future it would be fun to try to do it again in some other form or venue, after I’ve graduated.”

Perhaps nothing could speak to the changing, timeless possibility for The Intense Fragility better than the value of time in the piece itself. Time slows down in William’s world, and speeds up in Nijinsky’s. The first words of the piece do the best job of tying together these themes: “Death came unexpectedly, for I wanted it,” Williams utters the words of Nijinsky’s diary.

In the end, their connection over time and death unites Nijinsky and Williams. Nijinsky’s diary illuminates the sad despair to which he and Williams are doomed, artfully setting the stage for a long and painful demise: “And then I wanted to laugh, because I felt laughter, but I understood death and stopped. I have become empty.”

The Intense Fragility will take place Friday, November 9 and Saturday, November 10 at 7 p.m. in the Frear Ensemble Theater.