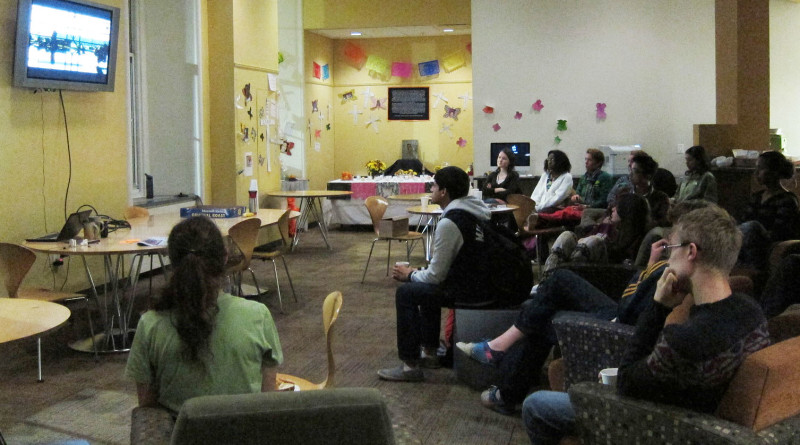 Child slave labor in the Ivory Coast may have made your Halloween chocolate. Swarthmore’s Free the Slaves group screened the movie The Dark Side of Chocolate on Thursday night, bringing attention to the modern problem of slavery and human trafficking. Free the Slaves’ head members, Aileen Eisenberg ‘15 and Natalia Choi ‘15, chose the film to coincide with candy-covered Halloween week.

The film opened with undercover journalist Miki Mistrati travelling to the Malian border investigating rumors of child trafficking to the Ivory Coast–a nation that produces 42 percent of the world’s cocoa. Mistrati works uncover in plantations, where child laborers may be bought for less than $300.

The children are usually induced by the promise of good pay at first, only to be trapped in bondage. They may not even know they are enslaved.

The film shows Mistrati confronting a wide range of hapless officials, from the CEO of cocoa producer SAF CACAO, to the Ivory Coast’s Chief Secretary of Labor, to a policy expert at the International Labor Organization. Some deny the problem outright, but begrudgingly relent once Mistrati shows the footage of children in plantations.

“It was not as much surprising as it was appalling,” said Leonie Cohen ‘16. “It was interesting because a lot of it was focused on the higher up politics and CEOs and corporations. They just ignored [slavery] and feigned ignorance.”

The group is new this semester, and its fluid membership of about a dozen are currently educating themselves on the issue of slavery.

“We want to work with raising awareness about other forms of slavery because forced labor isn’t the only type,” said Eisenberg. “In Swarthmore we’re privileged as students to have a voice, to have the student body and administration listen to this. We really want to make a change at the school to increase awareness and do what we can do to fight this together.”

Free the Slaves also plans to work in Chester with local students to raise awareness of the issue.

One major way to combat slavery is by promoting Fair Trade. Choi and Eisenberg both campaigned for Fair Trade at their high school, making it the first Fair Trade high school in the nation.

“We discovered Fair Trade as one of the solutions to ending the cycle of slavery by empowering people in vulnerable situations to take charge of their own lives and not get exploited,” said Choi.

Transforming Swarthmore to a Fair Trade college would involve intensely raising awareness of the issue as it mainly affects our food, according to the club. Free the Slaves is considering allying with groups like SLAP and environmental groups to promote Fair Trade. Ultimately, they will need a resolution from the Board of Managers to commit the school to Fair Trade products.