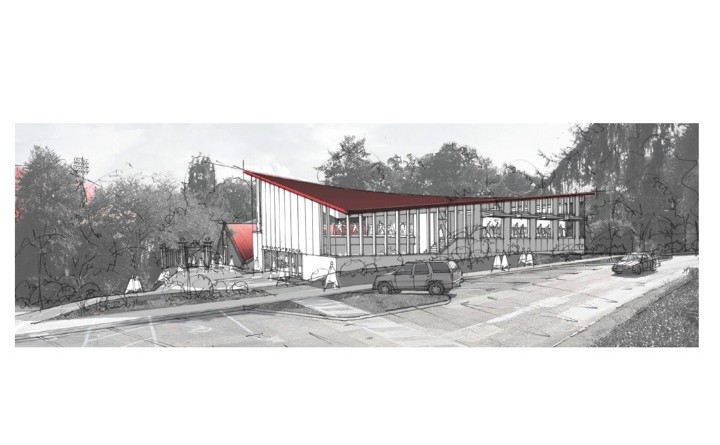 The administration has announced a proposal for a new Wellness Center. The building will address the College’s new wellness initiative as well as a growing need for more athletics and theater space . The only thing standing in the way is the cost.

Wellness Coordinator Satya Nelms, Athletics Director Adam Hertz, Vice President for Facilities and Services Stu Hain, Communications Director Nancy Nicely, and Dean Braun together described the new building, which will replace the squash courts and will house new space for wellness activities, fitness equipment, and a theater approximately the size of the Frear Theater in LPAC. Squash is no longer played at Swarthmore.

“If you think about the synergies between wellness, fitness, and theater being together in one community space that will welcome faculty, staff, and students […] I think it’s a really powerful idea,” Braun said.

A replacement facility on the squash building site has been floating around in Hain’s mind for some time, and he said the pieces have finally come together. According to Hain, demand for workout and rehearsal space has grown beyond capacity since the Mullan Center and LPAC were originally constructed in the past two decades.

“The Mullan Center, which opened in 2000, was very suitable at the time,” said Hertz.

But now, “[it’s] so packed that it’s actually difficult to get in,” said Hain.

Workout equipment has overflowed into the foyer and back hallway, but it’s still not enough space, the administration said. Hain said the building is intended to “meet an immediate need” until a long-term vision for athletics can be implemented through the current Strategic Planning process and attendant capital campaign.

The Hicks renovation, which eliminated the Mural Room as an option for theater rehearsals, has added to the urgency of the new building. The possibility of a Clothier/Tarble renovation removing the Upper Tarble deck would also necessitate new dance space. Increased interest in wellness activities has also created a need for a centralized wellness facility.

While some details have yet to be worked out, the new building will likely have approximately 5,800 square feet on the top floor for workout equipment and other fitness-related activities, said Hain. In comparison, the main workout room in the Mullan Center contains just 3,000 square feet. When the new building is completed, the Mullan Center may be used for other athletic purposes. The bottom floor will have an approximately 1,500 square-foot theater, as well as around 4,000 square feet for other purposes. A terrace outside the building will provide further space.

While building doesn’t yet have a formal name, Hertz joked that it could be called the Well-Fit Center. Indicating a hope for donors, Hain said, “what we hope beyond all hope is that it has somebody’s name on it.” According to Nicely, four million dollars will cover the design, construction, and equipment needed to make the building happen.

Hain said these four million dollars “will not come out of the college’s budget […] we hope that there’s a donor tomorrow, but I don’t really know.”

Braun said that the Board of Managers has given the College’s Development team, which does fundraising, permission to begin contacting donors.

An effort will be made to ensure the building adheres to environmentally-friendly standards, and will attain LEED Silver status at a minimum. According to Hain, the building will use the existing foundation of the squash courts and the heating system in the Ware Pool building. Lumber from the courts will be repurposed, and natural light and open ventilation will minimize the electricity bill and carbon emissions. The building will also contain an elevator to meet accessibility standards.

How soon can Swarthmore expect to see the new building? Hain said that a timeline for donations is unclear. However, Nicely said in an email that “other colleges have had great success with parents and alumni parents, in particular, contributing towards such efforts since they place a high priority on the overall health, wellness, and fitness of their students.”

Once all the money is raised and design begins, opening day should be an additional fifteen months away, said Hain.