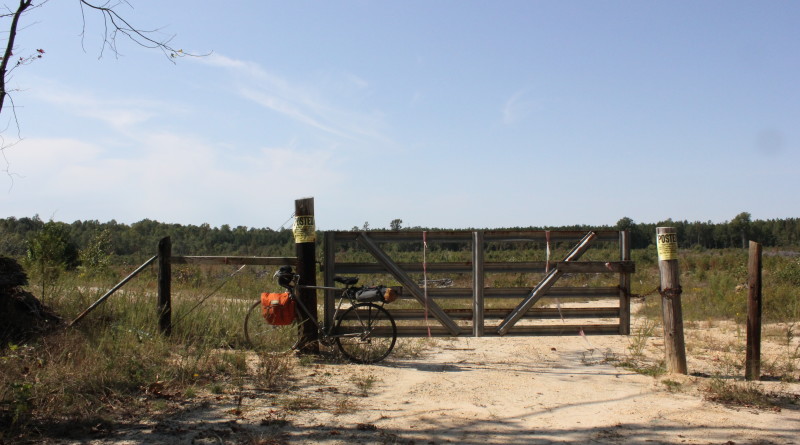 To travel by bicycle is to see & be seen.

People stare as they pass in the bellies of their cars, & I wonder who it is I am to them, person struggling uphill with loaded bicycle, purple helmet, not-fancy-matching-spandex, not-fancy-$3000-touring-bike. I can only be out of place in the sea (rather, swamp) of cars.

I remember seeing, from a bus in southern Spain, a man walking along the highway with nothing but a guitar strapped to his back. That image is all I have of him, & that image was all it took for him to pass into anecdote. I wonder, given the craning necks of the travelers-by-car, if I am becoming, like him, a Stranger, Remembered.

But it is not all about spectatorship. To travel by bicycle is—when stationary—to be constantly plied with questions, with an interesting range of expressions of disbelief, with well-wishes, and with such generosity that I may as well have pedaled a century back in time.

For example: Lunch in Chilesburg, not so much a town as a minor interruption in the sweep of the cornfields between Fredericksburg and Richmond, VA. I sat outside a grocery store, eating my cheese and ratatouille sandwich. Across the street was a gas station, and beside that was a boarded-up house. That was the extant of the town. People pulled up in pickup trucks, went into the store, got back into their pickup trucks with trays of fried chicken, and drove off. Suddenly there were accents so thick I could not understand a word.

An older man came up to me with money in his hand, and I prepared myself for the worst. This is for you, he said, handing it towards me. Oh! I said. That’s sweet of you, but I don’t need it. Everybody got to eat, he said. Come on now, take it. No, really! I said. I’m fine, I’ve got my lunch. T’s not from me, it’s from the Good Lord. Oh! I said again, not really knowing what else to say. Well—thanks so much. What’s your name? Frank, he said, and smiling a little, but not a lot, got into his pickup truck and drove away.

This was after the cashier at the store had given me a big bottle of water, and before a barista gave me a big piece of chocolate cake and two sandwiches, and before a woman opened up her home to me that night & fed me breakfast the next morning. And this was over the course of not even a full day.

The cars, I think, are what make the people strangers, as though without my own glass & metal box I am stripped of the armor that keeps one life safely away from another. Or perhaps it is that to be accompanied by a loaded bicycle is like being accompanied by a dog: there is an element of my life that is immediately visible, a topic of conversation that is forever close at hand.

Also, it is impossible to look threatening on a bicycle. Also—and the importance of this point cannot be overstated—I am a lone young white woman. I am finding, that if America still has vague chivalric ideas about my vulnerability, and if protecting me means giving me muffins, which I seem to receive more than any other food item, then I can abide by them, for the time being.

There is little, these days, that I can give back. I can bake bread for the people who house me. I can listen to the people who tell me about their brother who just died of cancer, the eldest son who ‘we lost,’ the proceedings of the divorce or the loss of the family business—the traveller, as someone who will never be see again, is also a place to leave one’s troubles, as though I could pack them in with my sleeping bag and carry them away with me.

And I can tell stories, I can give pictures to the picture-hungry: pumpkin fields in the Delmarva peninsula, all dead with dots of orange; vacant boarded-up restaurant in the form of a ship, beached by the side of the highway; razed barren cornfields with the little house there in the middle, the great machine spilling a steady stream of red grain into a truck (will you look at the blue of the sky); big lot with a million million sleeping yellow school busses all in rows, million million inflatable Halloween decorations there around the front yard Virgin, cars slowed & honking at the geese standing resolute in the middle of the road; house with the porch roof curling down on one side all the way to the ground, old trolley car in the middle of the field, propped up on beams, ladder to the roof, all rust grown over with green; cows grazing that look up with it’s-hard-to-say-what in their eyes, billboard THE LAP OF LUXURY with a big Edward Abbey rip down the middle; roadside shrine with little kneeling saints, dwarfed by the uneven curve of a plywood rainbow overhead.

Aaron for housing me & feeding me so much delicious buckwheat pizza, John from Velocipede for grooming poor tired Alexander, that man for rooting for me when I was struggling up that hill, everyone at the Leadership Council of Women Religious for taking the time to speak with me, Peter for driving all the way to Ocanquan for me & Stevie for being such a wonderful graceful hostess, Silvia for being the first cat I have ever liked, Frank  for giving me so simply that $20, Luis & Maggie at Ashland Coffee & Tea for the massive piece of chocolate cake and sandwiches and dashing around, Karen for putting me up on such short notice & Jonathan for sharing his groceries, Mark & Courtney for housing & feeding me & Charlie for pushing the proverbial stone up the proverbial hill.