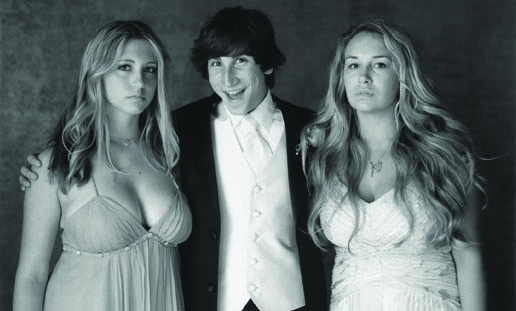 The high school prom does not usually provide fodder for larger issues of societal representation. It typically entails dancing, hijinks and perhaps tomfoolery — or does it? “Prom: Photographs by Mary Ellen Mark,” on view now through October 28 in the Julien Levy Gallery in the Perelman Building of the Philadelphia Museum of Art, considers prom’s symbolism and implications at high schools across the United States.

Mary Ellen Mark, the photographer, visited 13 high schools between 2006 and 2009, seeking places that had “the right mix of students” to give a multi-faceted portrait of prom in its entirety. She visited public, private and charter schools with students who ran the gamut of socioeconomic, geographical, and ethnic backgrounds. Mark took the pictures with a 400-pound Polaroid 24×20 Land Camera, an exceedingly rare device with only five in existence that produces 24×20” prints without negatives.

Viewers can enter the gallery and see the photographs in any order they prefer; no predetermined route exists, a metaphor for the uncertainty of prom night and its aftermath. In an exhibition with approximately 60 pieces, only two contain smiling subjects. In the lion’s share of the artworks, the partygoers look solemn, even forlorn. The tone beset by their expressions contrasts with the proverbial connotations of prom. The edges of each picture appear burnt; this, along with the unsmiling faces and lack of color, gives the images an antique quality, and at times it almost feels as if we are studying 19th century wedding photographs.

Each teenager’s seriousness contrasts with their flashy clothing that glitters like polished diamonds. The subjects seem so grave that it makes viewers question whether their poses were completely staged and artificial. It seems that although these students put such an effort into preparing for prom, they are not quite content with the results. Prom apparently did not fully throw an opaque tapestry over their everyday lives or put their struggles on hold.

Are we seeing these students as they actually are? As the photographs explore the diversity of prom experiences via the attire that subjects of varied strips donned, we lie privy to making assumptions about these people, since all we are given as viewers are outward appearances. The exhibition, in its curator Peter Barberie’s words, “deploys photography’s democratic nature… to query the democratic process of the United States.” To proceed with that query, we must first figure out if what we see in these photographs and what we see of the people they capture are in fact genuine.

Enter Martin Bell’s film of 33 minutes that is included in the exhibition, which shows interviews of some of the prom attendees we meet throughout the gallery. The staid, colorless people we saw before suddenly appear in brilliant colors that are easily forgotten amidst the flood of black and white. They all smile and laugh with carefree, optimistic attitudes befitting their youth, a feeling that had been thoroughly obfuscated in the photographs. The film withholds their names and origins, presenting only their personalities, dialects and perspectives on prom and the future. The judgments that naturally arose when we saw their prom photographs before now seem specious and so unnecessarily narrow; we see their faces light up as they ruminate on love, what prom represents and the futures they desire.

I had viewed all these prom guests’ faces before I saw the film, and I realize now that I made assumptions about their character. I assumed that the girl with the “Prom Queen” banner draped around her gown was probably the stereotypical silly cheerleader, with a brain as empty and vapid as the wannabes who elected her to this pseudo-prestigious position. She, in fact, was Christina Chang, who ended up attending Princeton University and earning the Presidential Scholar award. I speculated that Latosha Smith, who looked about eight months pregnant in her prom photograph, was an irresponsible, immature little girl in a young adult’s body who would most likely raise a daughter that would have the same-sized belly in her own prom picture eighteen years from now. But in the exhibition catalogue I learned that she made the astutely prescient statement that “I don’t feel like an adult. I feel young still. My child will make me an adult.” Here, “I’ll be an adult” does not serve as a justification for reckless partying and irresponsible sex, but as an affirmation for the new duties Latosha will have to perform and her readiness to do so.

Not surprisingly, the diversity of the portrayed students extends into their views on prom, love, and the future. Fulani Ogunjobi, a student from Newark, New Jersey, describes prom as “a competition among females” for best-dressed superlatives. Chang, prom queen of her Houston, Texas high school, claims that people of her age are not capable of legitimately experiencing love, while Thomas Burrows knows with certainty that he “loves everything about” his date, Meghan Connolly. Matthew Wasson and Mallory Ann Wu divulge minutely detailed plans about the lavish homes and ritzy cars they hope to acquire, while Shane Kammauff only wants to “write a great novel or make a great discovery or do something to really change the world.”

Based on their photographs alone, no viewer could have ever guessed at the beliefs and opinions held by the individuals portrayed. For all of them, their appearances in hindsight offer no insight into their identities. Does this, then, prove that the dominant political parties in American government — while ostensibly representing all the constituents that vote for them — in fact do not come close to advocating everyone’s causes? Countless Americans from across the political spectrum express abject disgust with the machinations of Democrats and Republicans. We continue to loyally vote for them because a vote for a third party always translates into a vote for the opposition. Despite this, the parties continue to refuse to touch “third rail” issues even though that is exactly what everyone desperately wishes they would address. Through their choice of dress, all the people photographed for “Prom” try their utmost to display their beauty, their worth and their uniqueness. But viewers continuously stymie their efforts, as our natural prejudices and biases come to the forefront of our minds no matter how much we wish they would disappear.

Prom may be a simple occasion, but the students who attend them, despite their youth and lack of life experience, are far from simple. I cannot fully explain what “Prom: Photographs by Mary Ellen Mark” was like, because I am stuck in my life scripts. Therein lies the beauty of this exhibition. It proves through the artworks themselves and through our unique interpretations of them that people rarely comprise what their exteriors suggest. Prom is not a universal construct among all high schools; it may be a “coming-of-age ritual,” as Mary Ellen Mark calls it, but it may also be an inevitably failing grasp for teenage-hood. It may have nothing to do with growing up; it may symbolize conformity to what typical teenagers like, and therefore something to avoid at all costs. Maybe it’s just a grand, wild party. What is certain however, is that you won’t know what “Prom: Photographs by Mary Ellen Mark” looks like, even if someone tells you about it or you see pictures online, unless you go and see it for yourself. Even then, it remains a prism of black and white enigmas.