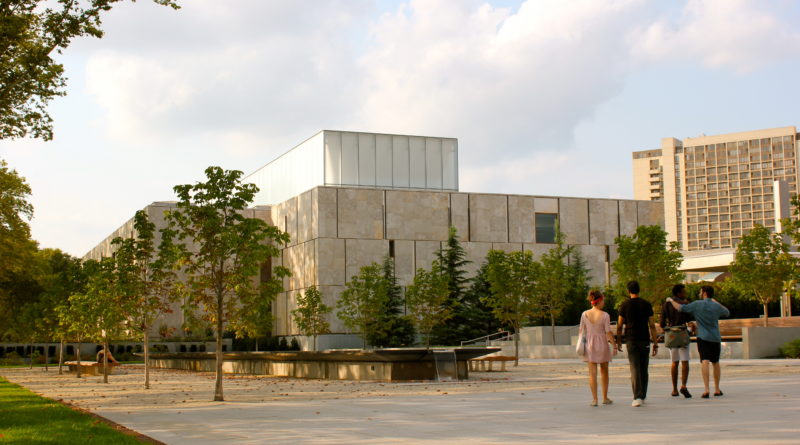 What is initially most impressive about the Barnes is not its meticulously arranged, first-rate collection of privately-owned Renoirs, Cézannes, and Van Goghs, but the mere architecture of the building. The Barnes Museum is the most beautiful museum in Philadelphia, even more impressive than its Parkway neighbor, the Philadelphia Museum of Art.

In fact, the museum is likely the city’s best application of modern architecture. The building’s exterior is covered in tan, square-cut marble slabs raised from the building’s actual foundational walls. The museum’s central lobby is awash with natural light that streams in from tall, narrow windows. Every fourth wall seems to be made of glass. A glass atrium near the downstairs coat check contains only a tree that grows in the center of the building surrounded by four glass walls. The building cost $150 million to construct, and looks it.

But as much as the building aesthetically impresses, it’s merely a distraction from the art contained within what is, for all purposes, another building inside this architectural accomplishment.

The museum’s paintings are all kept at the opposite end from the entrance, in a space that was legally required to recreate Albert Barnes’ estate. Barnes had taken great care to arrange his paintings in what he called “ensembles.” These “ensembles” amount to groups and clusters of paintings whose assemblage pays great attention to the content and history of each painting. One room of the collection contains many close-cropped portraits, while another is reserved for the collection’s few pieces created before the nineteenth century.

Barnes insisted that his paintings, which he began to privately collect around 1910, never be moved from where he had placed them throughout almost a dozen rooms of his Lower Merion estate. So when the collection, in a controversial court decision, was allowed to be moved into Philadelphia for greater public accessibility, it was stipulated that its new home had to present the paintings as Barnes intended them to be seen.

The Barnes Museum solved this problem by constructing a spatial replica of Barnes’ home within the new museum and hanging the paintings in their corresponding spaces.

Asked what he thought of the transfer, an elderly museum-goer said, “I loved the way they were hung there and I love the way they’re hung here.”

On principle, Barnes would most likely have not approved of his collection’s displacement, but he very well may have approved of their new presentation. The intent behind his “ensembles” is as clear as ever, and the museum has even preserved the peripheral antiques that Barnes thoughtfully interspersed throughout the collection. These antiques include tables, trunks, chairs and clay pots as well as pieces of wrought iron mounted on the wall between and above paintings. An intricately carved serving spoon would be hung next to a canvas containing a picnic scene. A large door hinge with an engraved floral pattern would play off the floral pattern on a piece of china held by the subject of a portrait.

The collection’s paintings, too, follow this same kind of organizational logic. It may be hard to puzzle out why a certain abstract work was hung in a room populated with seascapes, until you realize that the series of isosceles triangles mimic the sails of boats.

This conversation between works is one of the advantages of how the collection is presented. Unlike in most museums, works of art aren’t flanked by placards that identify them. The artist’s surname can be found engraved into a piece of metal at the bottom of the frame, but these metal pieces are the same color as the frame to which they are attached, and their script is so small that you must inspect it in order to render it legible. The overall effect of this presentation is that the works are largely decontextualized.  The viewer no longer connects works in terms of art movements and the historical approaches their creation, but instead simply looks at them.

This allows for a more engaging experience with the works. If the paintings on a particular wall exude a certain vibe or emotion, the viewer is confronted with the question of how all these works by different artists working at different times and using different techniques could reach this universality of expression.

The pieces themselves become irrelevant. Barnes collected some of Cézanne’s best and Renoir’s worst, but the individual paintings submit themselves to the layout of the collection. Sure, the excellence of some of the paintings makes it difficult to look at certain “ensembles” as wholes, like Monet’s magnificent “Le Bateau Atelier,” but this is not often.  The collection flows from room to room well and invites attendees to circle back through the whole collection again.

It does a lot of things, but ultimately the collection at the Barnes Museum does what any good collection should. It engages the viewer to think about art.