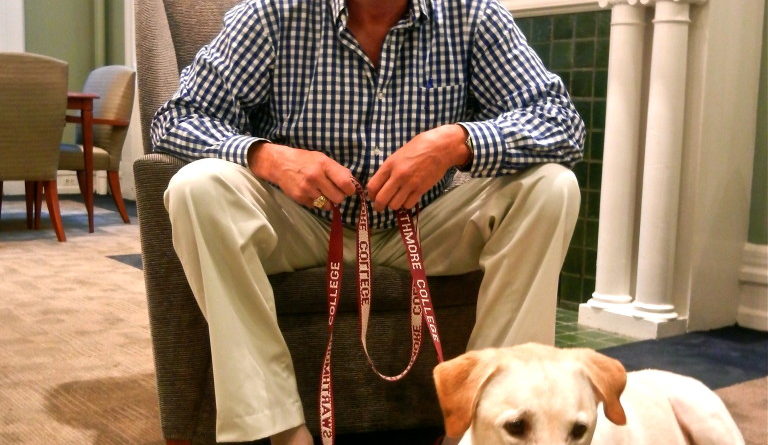 New feature: Swarthmore faculty and staff with their beloved canines

THE START OF A WONDERFUL COMPANIONSHIP: Henry was given as a gift to Tom on his 50th birthday by his children. The wrinkly and adorable Lab pup was only nine weeks old when he was introduced into the Elverson family.

“OH HENRY!”: When he was just one year old, Henry broke off his leash in the Crum. Tom began to ran after his puppy, but lost sight of him for awhile. It turns out that Henry was only taking a leisurely swim in the Crum River.

WHAT MAKES MY TAIL WAG: Among his favorite treats, Milkbones are definitely Henry’s favorite. He also enjoys long walks and the occasional tummy and ear rubs.

TAKE ME OUT THROUGH THE JUNGLE: From time to time, Tom takes Henry on walks. During one trip, this adventurer took a tour of the whole campus as he visited favorite locations such as Tarble, Frat Row and Parrish Beach.

MORE THAN A PET: After Swarthmore’s Human Resources Team gave an official OK to allow dogs in faculty offices, Henry has become a beloved member of the campus community. His presence is therapeutic, and he has quickly become popular within the student body. In fact, Tom remarks, “Sometimes I hear students shout ‘Hi, Henry!’ rather than ‘Hi, Tom.’”