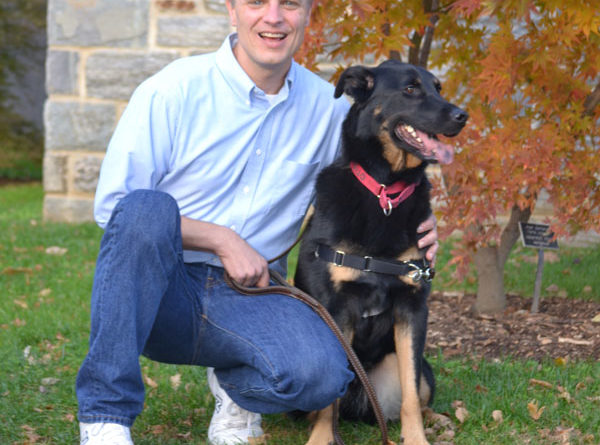 “THIS ONE CHOSE US:”  Phil and his wife, Andrea, decided to add a new member to their family two years after their previous dog, Miles, passed away. (The couple actually met while Andrea, previously a physics professor at the College, was walking Miles on campus.) After receiving notice from petfinder.com, the two ventured to a local Pet Smart where shelter dogs were brought in for adoption. They quickly approached a litter of pups, and Otis immediately ran up to them. They couldn’t resist and left for home with the pup that chose them.

TOP OF THE CLASS, ONLY WHILE IN CLASS: Otis attended Puppy Kindergarden when he was younger. There, he showed off his obedience training and became the teacher’s pet. However, when the trainer isn’t around, the pups will play, and that is exactly what he did. He would not be the star student he was while class was in session. During trips to Smedley Park, Otis would occasionally run off and have Phil search for him for an hour or so. Regardless of his behavior, Otis is always up for fun and ready to meet new friends.

A BIRD’S BEST FRIEND: At hime, Otis shares a household with a small, 4-year-old parrot, Nigel. They manage to get along very well. In fact, there was one time in which Nigel flew onto Otis’s back, and poor panicked Otis quickly ran up to Phil not knowing what to do. Nigel was hanging on to Otis for dear life!

A MUSICAL TRADITION: The Everson family is filled with a talented bunch of pets. Otis is named after Otis Redding, known for his talented song writing in soul music and rhythm and blues, and Nigel is names after Nigel Tufnel, a character who plays a guitarist in This is Spinal Tap.

A NEAT HOWL: Whenever he hears loud sirens outside, Otis is ready to let out a long howl. Phil commented on how his howl is very calming and is almost song-like. I heard a recording of Otis, and completely agree that it is very different from that of other dogs. With his very smooth howl, I think Otis lives up to his talented name!