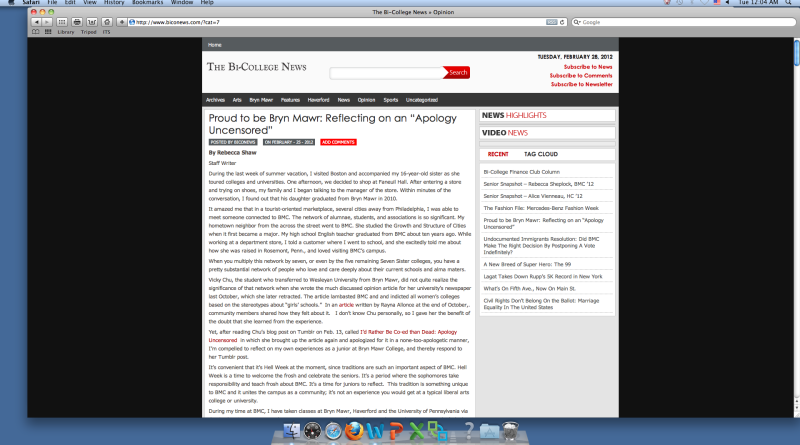 After funding issues between the Haverford and Bryn Mawr student governments over The Bi-College News last year, the paper has been striving to establish a stronger online presence.

In addition to launching a new website this year, some editors of the Bi-Co News have also begun to consider reducing the pagers of each issue as a part of its transition to an online publication. Nevertheless, for the time being, the newspaper will continue to publish print issues.

“It’s really about connecting the two,” current Editor-in-Chief Nina Zipkin, Bryn Mawr ‘12 said. “Going forward, we definitely want to continue to print issues, because we love it and it’s great for people to read.”

This positive outlook is recent. Last year there was speculation that due to the size of the newspaper, Bryn Mawr was handling a heavier financial responsibility than Haverford. The two colleges had a longstanding agreement between Bryn Mawr’s Self-Government Association (SGA) and Haverford’s Students’ Council. Bryn Mawr would fund Bi-Co News while Haverford would fund other bi-co organizations such as the movie club and the student radio station.

So it came as a surprise to both the Bi-Co News and Haverford’s Students’ Council when the Bryn Mawr’s SGA informed them last February that Bryn Mawr would not fund the newspaper until the two schools agreed to a fairer share of funding for joint student organizations.

“The way it went down was bad. It reminded me too much of American politics,” Haverford alumnus and former Sports Editor of Bi-Co News Brad Gibson said. “For student governments that generally cooperate with each other, this seemed like a shame.”

There is some dispute over whether there was communication before the funding was cut, with the SGA claiming that an email was sent to the newspaper during the winter break of 2010 regarding the funding issues.

Following the cessation of funding, the newspaper staff visited both student governments to talk about a possible agreement while also using the leftover funds to publish a small issue alerting the readers of the funding issues.

“It was probably an appropriate time to revisit the bi-co agreement,” former Co-President and current Treasurer of Haverford’s Students’ Council Franklyn Cantor ‘12 said.

Later in the same month, the two student governments eventually reached an agreement that they would jointly fund any bi-co organization with a budget of over $4,000, which included Bi-Co News. Since, the newspaper has not encountered a shortage of funds. Overall, there exists a general consensus among the editors that the newspaper is currently receiving an adequate amount of funding.

“I think the [current] process is much fairer in terms of how much the two schools support the newspaper,” current SGA President Yong Jung Cho ‘12 said.

Though the funding crisis temporarily affected the newspaper’s ability to publish issues, its effects were limited mainly to last spring semester. In the long-run, the funding issue has not significantly hindered Bi-Co News’ progress. Nevertheless, the temporary cessation of funding has pushed the newspaper to reconsider its heavy reliance on printed issues in order to be more self-sustaining. A part of the new approach has been the transition from a print-heavy newspaper to an online publication.

“The funding issue has in fact allowed us to reevaluate how we can be more cost effective,” current Sports Editor Theo Feder, Haverford ‘12 said.

Correction: Franklyn Cantor is in the class of 2012. He was previously listed as Haverford ’13.