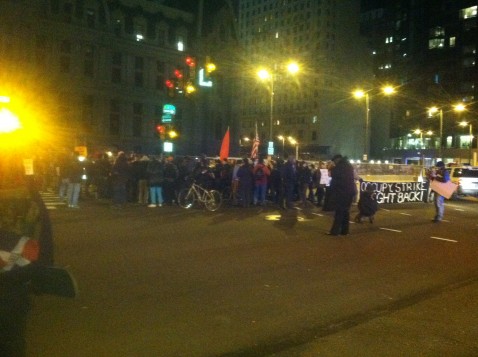 The Occupy Philadelphia movement, latent since its forced evacuation from City Hall in November, roared back to life with a protest march intended to show solidarity with Occupy Oakland.

The Monday march started at LOVE Park near City Hall and picked up steam as it marched south on 15th Street and then west on Spruce Street towards Rittenhouse Square.  Protesters then turned north on 16th street, buoyed by the shrieking of car horns, before marching back to City Hall along Market Street, flanked by police cruisers.

The night was charged with tension as protesters voiced a violently oppositional message, chanting such slogans as “Fuck all police” and “We stand with Oakland.”  Some onlookers, walking alongside and mingling with the protesters, took up the group’s message and shouted with them.

One of the protesters, Vanessa Graber, said that the march was a response to a call from the national Occupy organization, and that similar solidarity demonstrations were taking place in New York, Boston, Los Angeles, and other cities.

Oakland protesters clashed with police yesterday after the organization tried to take over a vacant building.  The New York Times reports that over 400 people were arrested  in that eviction.

“There were injuries and police brutality,” she said, which included “the beating of a pregnant woman.”

Graber said that it was the violent nature of the eviction that prompted tonight’s protest.

Protesters, under the watchful eye of police, stopped in front of City Hall to display a sign reading: “Occupy. Strike. Fight Back!”

Although Occupy Philadelphia was evicted from City Hall, tonight’s spur-of-the-moment protest suggests that the group still retains its organizational base and an anti-establishment message that continues to reverberate.