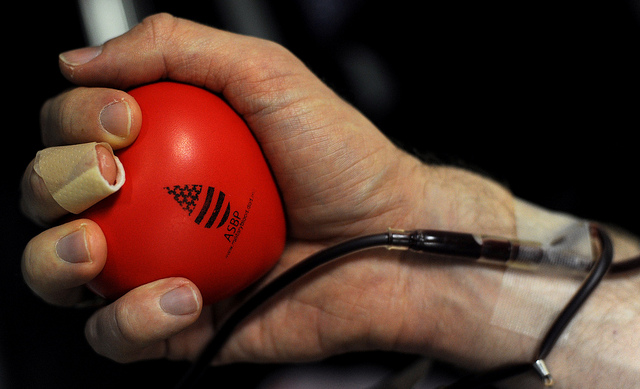 Instead of a plaque with his favorite quote, Vice-President Maurice Eldridge has a T-shirt hanging off the door of his office with the quip “Starve a Vampire, Donate Blood.” For years he has been deeply involved with Bloodlines, a Red Cross-affiliated blood drive that takes place at Swarthmore every semester. Although blood drives have been going on at Swarthmore for a long time, Eldridge only got involved when an alum pitched the idea to the then-President Al Bloom, asking the President’s Office to get involved in order to increase participation.

Since then, interest in the blood drives has risen. “DU got involved, the RAs did, students started Rotaract… it was a matter of reaching out to other elements on campus,” said Vice-President Eldridge. Both the number of participants and yield have increased over the past five years. In 2006, The Red Cross named Swarthmore “College of the Year” for collecting the most units.

“Blood saves lives, simple as that,” said Eldridge. “There’s a great need for blood and it is a relatively painless experience. That’s why Swarthmore students and every student who considers themselves a member of the community should sign up.”

The Red Cross, he said, recruits students in different colleges according to the individual campus culture. While on some campuses they appeal to the prevailing competitive culture to increase recruitment, the organizers of Bloodlines have found that the fastest way to catch Swarthmore students’ attention is to appeal to their wit, hence the vampire T-shirt. However, Eldridge notes that such tactics are often not necessary. “I honestly believe that this is a community of generous folk. There is already a culture of people thinking beyond themselves.”

Many donors on campus are regulars and they look out for Bloodlines every semester. Eldridge said that five people had signed up for Bloodlines before he even sent the very first email. Some students have even emailed Eldridge, apologizing for not being able to donate.

Eldridge is as conscientious as some of the students. “I’ve overcome my own fears and reluctance,” he said when asked about his own donating habits. He has regularly donated blood despite his busy schedule. Eldridge revealed that donating blood has sometimes been difficult for him. “I’m a hard case,” he said.  After a bout of scarlet fever as child, he developed almost an allergic reaction to giving blood as a result of giving blood samples every day. “For a long time I didn’t do it [donating blood]—I thought it would be too difficult, thought it would hurt.” However, he overcame his initial aversion towards needles. He said he realized that “If I’m going to lead, I should participate.”

Eldridge strongly encourages everyone to consider donating blood if they can. Still, The Red Cross does impose some restrictions to protect both donors and receivers. Some are travel-related, a fact that prevents many students who visit exotic parts of the world from donating blood. However, Eldridge cautioned against assuming that you cannot donate blood just because you have travelled to a foreign country—usually the restrictions do not apply for short-term travel. The basic guidelines for donors are very simple. The Red Cross suggests getting a good night’s sleep, avoiding caffeine on the day of the drive and drinking lots of fluids.

Bloodlines is on Tuesday, September 27,  from 7:00 AM to 7:00 PM in Upper Tarble. Although online registration has closed, walk-ins are welcome and there are still slots open in the morning and early afternoon.

2 thoughts on “Maurice Eldridge On Bloodlines”