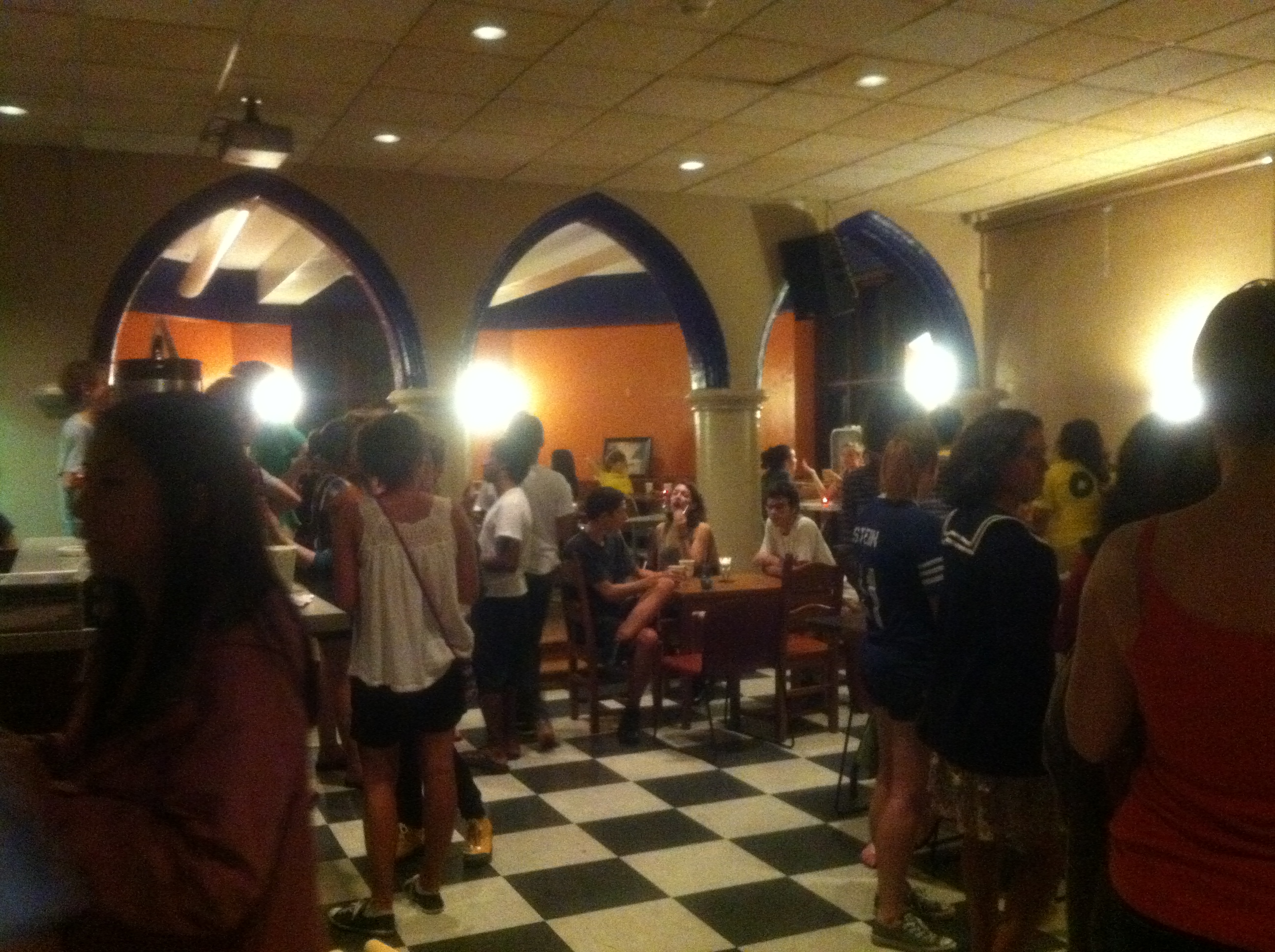 Paces is an institution, and therefore has gained credibility for being old and untouched—glossed with a resin of beer and screwdriver, a layer of grime buried into the then-faintly checkered floor. In the past, the people who visited presumably liked it. Those who didn’t like it ventured in only under the condition that they were blitzed, or about to be.

So what would explain this semester’s sudden transformation of Paces, unveiled in a “Paces Open Mic Night” last Thursday—an event where it was impossible to pinpoint a source for the fevered glow that illuminated the space (was it the votives on the tables? The candlelight hitting the newly-pumpkin walls? Freshmen roused by the hopes of a place cooler than Kohlberg to sip coffee cooler than “Totally Nuts”?).

The redesign of Paces Cafe began last Spring, when the students employed to cook and wait at the cafe were given free reign by the administration to make Paces their ideal space -one devoted to good coffee, good food, and most importantly, good friends.

Paces Cafe has been around as long as most students can remember, serving students every Sunday through Wednesday between 8 p.m. and midnight (the only available hours that students reliably appear and the only nights that the space isn’t used for Pub Nite or dance parties). It used to be run by a student Director who was hired by the Director of Student Activities. The Director would hire student waiters, bartenders, short-order cooks, bakers and chefs to serve ice cream sundaes, nachos, and drip coffee alongside more sophisticated (and more expensive) nightly specials. One student with a car on campus, called a buyer, would buy weekly groceries requested by the students cooking for that week, and he or she would pay out of pocket, and be reimbursed by the College.

Tania Doles ’12, part of the management team of Paces who helped with the redesign, had been hearing frustrations with Paces ever since she began working there during her Sophomore year. ” I would hear people complain, and I would complain too, because why didn’t the buyer get my ingredients on time?” Doles said. “Why is it so grimy in here when we’re trying to cook food?”

Doles applied for the Director position along with Callie Feingold ’12, also part of the current management team, who shared similar frustrations. “If only I was director,” she thought, “I could add so much creative energy, and I feel like I have motivation and drive to push this further.”

The two brainstormed what Doles called “realistic” ideas about how to make Paces better organized. Director of Student Activities Paury Flowers was a step ahead of them—instead of hiring one or two directors, she decided to hire a “management team” of four, in the hopes of better maintaining the cafe and filling what Doles feels “actually is a four-person position.” The management team for the upcoming year is comprised of Doles and Feingold, who are in charge of food and facilities respectively, as well as Mallory Pitser ’14, who will be the head buyer, and Zac Wunrow ’14, who is in charge of booking student acts for the space.

According to Doles, Paury also gave the team flexibility with the space.

“I don’t think that it was until all four of us were hired that we were talking to Paury … and she wanted to hear what we had thought of, and I thought wouldn’t it be cool to paint over these colors? … I mean the walls are so uninspiring it doesn’t even feel like a cafe. It honestly doesn’t. And everyone was just like ‘yeah, that would be great,’ and everyone seemed completely on the same page.'” When the group asked Paury, Doles explains, she responded,”‘of course … this is your space.” Doles was blown away. She said the administration “had never let us know, ‘this is Paces Cafe, and it’s for the students, and that we have the ability to change it when we want,’ and I didn’t realize that we had that much power.”

Admittedly, their spirit was dampened by the deteriorated state in which Paces remained. Doles quickly discovered, as she put it, “we’re not just starting from ground zero, we’re starting from negative ten – we have to bring it to ground zero at this point.”

During Senior Week, Doles and Feingold, along with their friends, went to Paces to see if they could clean out the space before they left campus for the summer. As Doles described, “it was in shambles. It was so disgusting, especially after Alumni Week, and there… [had been a] party that had not been cleaned up for literally a month, and so there were fruit flies covering every surface, an inch of just beer, and trash that was rotting, and especially with the humidity, everything was just fermenting.”

When they returned the Thursday before Orientation week, the pre-summer cleaning job seemed inconsequential. As Doles explained,”it was still disgusting. There were shards of glass on the floor, and moulded food items left out… it was really just a wreck.”

Before they opened for last week’s event, the management team not only cleaned, but painted the white walls a golden-orange and colored the gothic arches and moldings with an indigo blue accent.

Doles and the management team attribute the former state of Paces to a system that failed to ensure that party organizers adequately cleaned Paces the morning after their event. As Doles explained, “The theory is that you put this deposit down, and if you clean up after yourself you’ll get the deposit back …what was happening was that people would have big parties and make promises that they would clean the space but would get the deposit back and wouldn’t clean it… If they did clean it, it would be a half-assed job.”

According to Doles, Environmental Services is not responsible for cleaning up after parties, and although Workbox should be called if anything at Paces, like the lights, break during a party, students rarely pick up the phone.

Doles says she understands the attitude towards cleaning up Paces after a party. She explained, “If there’s a space that is already destroyed and has no hope, when you clean it, you kind of half clean it, because it’s already a horrible space. But I feel like everyone now feels they want to upkeep what’s been done.”

In that hope, Doles explained that “the goal [of the redesign] is kind of to change the image of Paces … We all know Paces as being kind of your average dance party, and it has a reputation for doing that, and that’s healthy and that’s good, and we don’t want to get rid of that 100 percent. There’s no way we can get rid of it.” Instead, Doles said, “we just want to shift some priorities … there are going to be a couple parties where we’re going to have to say no,” so that, as Doles explained, “instead of Paces being known only as a place where you[r] typical college party occurs, it’s going to be a space where we’re going to have more performers, open mic nights, … food tastings, cheese tastings, more poetry readings … and maybe even skillshares once a month.

The goal, Doles said, is to have “a lot of variety for everyone.” Part of the aim of the Paces open mic night last Thursday was not only to unveil the new space, but to avoid the feeling among freshmen that Paces Cafe is “this big secret sort of thing,” as Doles felt during her Freshman year.

Paces Cafe doesn’t yet know when they’ll be open for business. Doles explained that “it has been discussed that the appropriate time to open would be October 2nd,” although Doles admits that “it is late in the year and we do know that.”

Doles hopes to move the opening up to the end of September.

“[September] would be preferable,” Doles said, “but I think Paury kind of wants to open October 2nd just so we can really [have] our stuff together.”

The group has already been in contact with music groups who will preform in the space. October will likely see a cuban jazz artist at Paces Cafe and plans are in the works to stream shows from WSRN, the student radio station, into the cafe to give student DJs more exposure. Doles mentioned that she would also like to display student artwork on the walls and work with Olde Club to host meals for visiting performers. Although the cafe will maintain its traditional menu, it is aiming to focus on “really awesome” nightly specials and on expanding its coffee offerings beyond drip coffee and espresso to include cappuccinos, lattes and the like. The management team is also planning to get new, but cheap tables for Paces Cafe, and to reserve some of the most rickety specimen for Pub Nite only.

It’s possible that it is against the Quaker spirit of simplicity to be a foodie, but it doesn’t much matter; it’s the “hangout” atmosphere that has been the guiding principle in Paces’ reinvention. Paces was a place, Doles said, where “I could feel a part of something greater, and food’s something you can all come around to, food bonds so many people … We’re trying to make [Paces] bigger for more people to feel part of that community.”