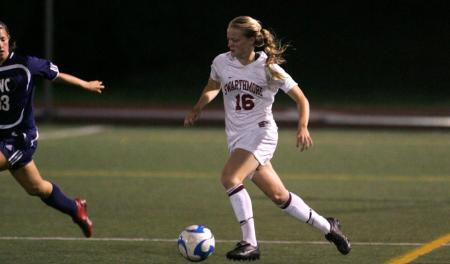 The task is formidable.  How does a team evolve without a class of six 2011 seniors that accounted for 84 goals and 57 assists over their stellar careers, a class that included the program’s all-time leader in goals, assists, and points?

That is the challenge facing the Swarthmore women’s soccer team entering 2011 and  looking to reestablish itself as a Centennial Conference and regional power after just missing out on the Centennial postseason a year ago.

As for all good teams with successful pasts, this struggle is nothing new.  The team embraces 2011 as an opportunity to grow both individually and collectively on the field as young talent begins to fill the roles of the departed seniors who won three-consecutive ECAC Championships from 2007-2009 without surrendering a single goal in nine tournament matches.

Sam Song ’12, who enters 2011 as the Garnet’s active leader in goals per game, is excited to erase the disappointment of a year ago and usher in a new era of dominance. “Although we lost a talented class of seniors last year, our players are prepared to step up offensively and defensively…This preseason, we have proven that we have the ability to fill the gaps.  Our current roster allows for tactical changes from past seasons which brings excitement and flexibility to how we play as a unit.”

With the return of six starters in key positions and a talented incoming class, Head Coach Todd Anckaitis, entering his seventh season at Swarthmore, and the new-look Garnet are confident that they can contend this season with.  “While our senior class last year was an incredible class, the freshmen coming in this year, at least on paper, are probably better than that senior group was when they got here.” Anckaitis said.

Centennial coaches agree that this is much more than rebuilding year for the Garnet. Coaches picked Swarthmore to finish 4th in the Conference’s preseason poll.

Among the key returners is senior goaltender Marie Mutryn, who brings a wealth of experience to the Garnet net and back line.  In 41 career appearances, Mutryn has posted a stellar career record of 23-9-3 and is 3rd in program history with 10 shutouts.  In her career, she has surrendered just .81 goals per game.

“Marie’s tremendous level of play gives confidence to the whole team, but particularly the back line. Over the past two years a lot of our defenders have graduated and so Marie’s leadership and knowledge of the game is key for our defense,” said senior Hannah Deming, who enters the season as the team’s active leader in goals (6), points (14) and game-winners (2).

In 2010, 15 different players recorded at least one point for the Garnet.  The team will need similar widespread production to compensate for the graduated scoring.  In addition, classmates Megan Brock ’14 and Aly Passanante ’14, who each scored three goals as freshmen, will have more freedom and space to operate in the attack.

Even before the preseason, many returning players had the opportunity to grow together both on and off the pitch during a July training trip to Germany and the Netherlands.  “We played three teams that were better than any team on the Division III level,” said Anckaitis.  “What was important for the team was understanding that we can play at that level and understanding the mental side of things too.”

Strengthening the mental aspects of the game was critical for Anckaitis in 2011 after five of the team’s seven losses a year ago came by a single goal.  “I think that sometimes we make things too complicated on the field, over-analyzing things, not having patience with what was happening both in the attack and on defense.  In some of those close games, we have to understand that if we go up 1-0 or down 1-0, it is not the end of the game.”

Once again, the Garnet will play one of the toughest schedules in all of Division III.  In 2008, the team became the first Centennial Conference side to defeat the No. 1 team in the nation with a wild 4-3 win at TCNJ.  They will have another opportunity against the No. 1 team when they take on the Falcons of Messiah, a team that outscored its opponents 117-5 en route to an appearance in the Division III National Championship game.

In the Centennial Conference, Johns Hopkins (No. 3) and Dickinson (No. 21) enter the season ranked in the d3soccer.com preseason poll.  Swarthmore handed Dickinson its lone Centennial loss last season and the Garnet are 3-1-1 against the Red Devils over the past three seasons.

Swarthmore opens play on Friday vs. Moravian at the Messiah Classic before taking on the hosts on Saturday.  Both matches are scheduled for 7:00 PM.