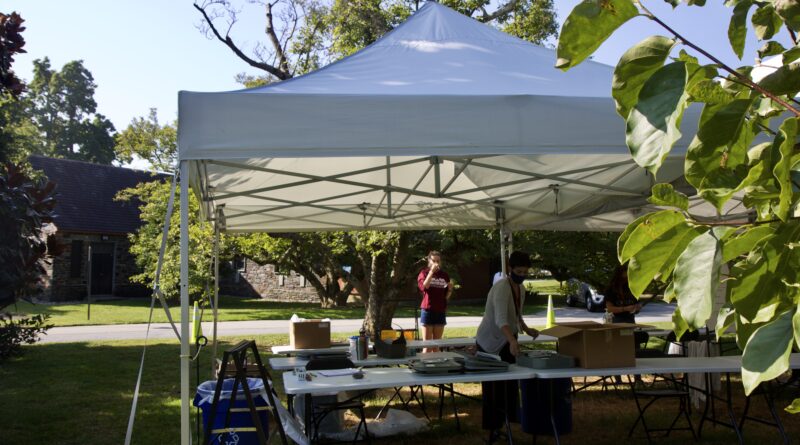 To protect the safety of students, faculty, and staff returning to campuses during a global pandemic, it is vital that colleges have comprehensive COVID-19 testing protocols. Over the first couple weeks of the fall semester, the college has put into place the COVID-19 testing protocols that were developed during the summer. Failure to comply with the latest testing protocols could result in a one-strike warning and, on the second occurrence, the revoking of housing privileges. While there is no COVID-19 outbreak among the over 600 on-campus students and the test positivity rates remained low, these new protocols have encountered several setbacks, such as damaged tests. In addition, people under the age of 18 did not receive their results from the first round of testing.

Residential students first learned about the details of Swarthmore’s COVID-19 testing procedure for Fall 2020 in an August 26 email from Casey Anderson, director of student health and wellness services.

Anderson announced the college’s decision to partner with Everlywell, Inc., a health and wellness company that provides COVID-19, food sensitivity, allergy, cholesterol and lipid test kits, among others.

The college chose Everlywell as a testing partner because of its test result accuracy rates and user-friendly testing kits.

“Everlywell was able to provide us with the result processing timeline, between 48-72 hours after specimen arrival at their lab, that we felt most comfortable with,” Anderson said in an email to The Phoenix.

Additionally, Anderson’s email detailed the college’s initial two-week testing plan, in which residential students would be tested on the day of arrival, a week after arrival, and two weeks after arrival.

On August 31, students under the age of 18 were told that they would be tested using LabCorp kits since Everlywell policies do not allow for testing of minors. Both companies’ tests are nasal PCR swabs that check for an active COVID-19 infection.

There have, however, been instances where the reliability of such testing processes has been questioned. The test results for the 35 underage students tested on day zero, the day students arrived on campus, were never returned to students. Angel Su ’24 found out about her missing results from her first test while getting her second round of testing at the Worth Health Center with her friend.

“When I was getting tested, someone next to me, also part of the under eighteen group, asked about the results of the first test,” said Su. “The person working [at Worth Center] told us that when the tests were sent in, there was a mix up or something and so the tests weren’t valid anymore.”

Furthermore, there have been cases where students’ test samples have been lost or damaged on the way to Everlywell’s labs. Students who experienced this received emails from Everlywell, but there were no quarantining protocols for those whose COVID results were ambiguous. Iver Jiang ’24 received an email informing him that the Everlywell lab was not able to process his sample on September 18, due to possible damage of the sample or a dry swab. He sent an email to Casey Anderson and was told to take another test on Monday, September 20, four days after he took his first test.

Jiang wasn’t sure where in the process his test sample had been damaged, whether it was during shipping or at school, but it made him more cautious.

“…what if I had a positive testing result?” Jiang asked. “I told my friends about it, and we became even more cautious about social distancing and wearing masks. But overall, the school did not restrict me from doing anything, it was really just self-awareness.”

Swarthmore’s testing protocols also cover plans for if a student tests positive. On Sept 12, the college informed the community that a student had tested positive for COVID-19 and that, in response, staff performed contact tracing, and the aforementioned student’s contacts were tested for COVID-19 and placed on a Health and Wellness support plan. While the student who tested positive quarantined themself in Mary Lyon Hall, their contacts were placed in The Inn.

“These [Health and Wellness support] plans include collaboration with departments across campus including the Student Health Center, the Office of Student Engagement, Dining Services, the Counseling and Psychological Services Center, Athletics, and the Student Deans Division,” said Anderson. “In partnership with the above departments, we will provide students physical, mental, wellness and academic support during their time of quarantine and isolation.”

After the first three weeks of testing, on September 18, Anderson sent an email updating students on the new testing student protocols. This change in protocol is based on the low-positivity results of the previous weeks of testing. Under these updated protocols, a quarter of the student population is tested each week, based on randomly assigned groups: A, B, C, or D. The email, however, also stated that if there is an increase in positive cases, weekly testing will resume. If students fail to participate in their scheduled tests, they will only have one more chance to take the test on the next day before they are no longer allowed to stay in on-campus housing. Some students believe the students need to be tested more often.

“I do think we need to test more often,” Angie Kwon ’24 said. “I think the random testing groups are a good way, statistically, but I think we need to continue weekly testing just because this whole covid situation is so fickle.”

As shown in the college’s COVID testing results, a considerable number of students have been tested with very few recognized positives. Out of the 2,283 student tests conducted over the last six weeks on approximately 600 students, there has only been one positive test result. There have, however, been some discrepancies. For example, there is a 56 person increase in testing between the first week of testing (August 31 to Sept 6) and the second week of testing (September 7 to September 13). While this increase encompasses additional international students arriving on campus, this number also at least partially includes the lost test results of underage students. There was no official announcement of how many test results were lost at that juncture. Similarly, no official announcement was made regarding the 33 person decrease in testing between September 7 to September 13 and September 14 to September 20. A full explanation for this decrease is still unknown, as it cannot be entirely attributed to the 21 students being sent home for violations of the Garnet Pledge around September 9 to September 23. Lastly, the number of tests conducted September 21 to September 27 represents slightly more than a quarter of Swarthmore’s population as underage students have been tested with Group A.

When approached by The Phoenix about the aforementioned inconsistencies, Anderson responded that the fluctuations are caused by a multiple of reasons such as students who moved in late, students who left campus after initial move-in, and students who needed to retake a test due to samples being damaged in transit to the lab.

“While the College has gone to great lengths to provide — to the greatest extent possible — a safe environment for our students, faculty, and staff on campus, we must remain flexible,” Anderson said. “Above all, the College remains committed to upholding the safety and well being of our community while providing a rewarding, meaningful education.”