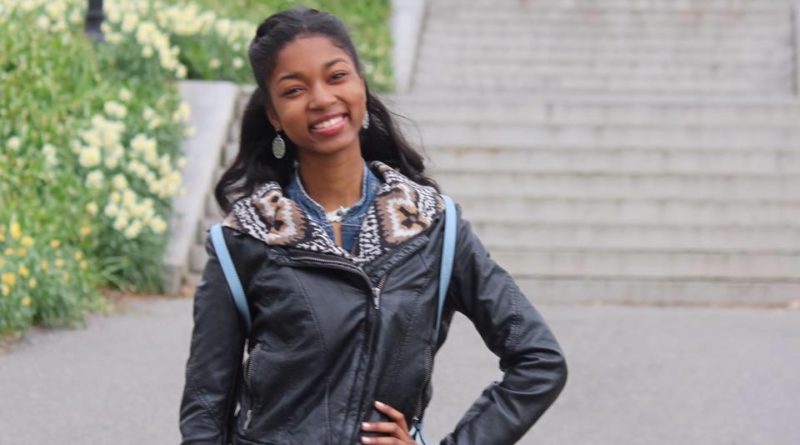 From Wilmington, D.E., Knox came to Swarthmore early since she was involved with the Swarthmore Summer Scholars Program (S3P). This experience allowed her to get settled in and make connections, among other things.

“I think something that really helped in my transition was actually being a part of S3P the summer before I came because in that I had already started to make really good friends like my roommate from the program, Maria [Andrade ‘21], who is still one of my best friends. S3P helped the campus to feel more like home rather than going to college before classes even started.”

Knox believes that Swarthmore is an environment that fosters genuine and healthy peer to peer relationships. It is this quality that she enjoys and appreciates, as people are not as supportive in other environments.

“It’s very different from high school where it was kind of toxic to be smart and try to  always one-up somebody. Here, I feel like it’s more [about] strengthening each other, and we realize our flaws, and we recognize that, and we look for people that help to make us better people and strengthen [us] where we are weak.”

This environment has allowed Knox to forge relationships with people of different positions and opinions, something that is very important to her. She is motivated and positively challenged by the relationships she has here.

In transitioning from her private school to Swarthmore, while Knox felt that it was difficult, she found camaraderie and comfort knowing others were in the same boat. She learned with time what resources she was afforded and how to use them.

“Once I realized who I could go to for help, and when I started to realize that other people around me were also feeling the same kind of way and they also needed help, I started to feel more comfortable and more confident in my studies.”

Because of the lack of diversity at her high school, Knox was not able to interact with and know as many Black students engaged in, and passionate about different things until her arrival at Swarthmore. It was because of this transition that her understanding of Black excellence was fostered.

“I think it’s changed a little bit because when I came I was from a private school where there were only a handful of other Black students … just in that [fact] … I didn’t have that many encounters with other Black students that were interested in things that I was interested in. [But] at Swarthmore, there’s a bigger student body and a bigger population of Black individuals who are all achieving and excelling in their different areas of study. So I think it has opened my eyes to what Black excellence is and is actually getting [me] to interact with more people that I think embody that.”

Since coming to Swarthmore and developing her community, Knox connects how her appreciation of her fellow peers’ excellence is inextricably linked to the history of Black resilience in general and specifically at Swarthmore.

“When somebody says the term Black excellence, that’s kind of always what I’m striving to be. I accept the term. I think it’s something that’s important to recognize, especially on campus while we’re celebrating the [Black Cultural Center]’s 50th anniversary. I think it speaks to how Black people have always risen above even when they’ve been oppressed or when they haven’t always been welcome in spaces. They’ve found ways to achieve and succeed. So that’s what I think when I think of Black excellence.”

Knox hopes her love of learning and her drive to keep going can lead her to embody Black Excellence.

“[One day] when you search Black excellence on the web or something … I hope my name pops up.”

In light of the celebrations and programming this year to commemorate the 50 year anniversaries of the Black Cultural Center and Black Studies Program, Knox reflected on her favorite event. She thought the programming has been a good addition to the rotation of events and has an important role in bringing people together to remember and celebrate. She hopes that these events continue past this year.

“I think the one event that really stood out to me was when we had that big barbecue at the beginning of the year when everyone came together, and I just felt like I was at home going to a barbecue with my family while enjoying the music, dancing, people, fun, and the food. And I just hope that continues. Even past celebrating the 50th anniversary.”

While Knox was familiarized with the B.C.C. during her orientation tour, she understands the importance of the BCC not only in holding the history of Black students and Black culture on campus, but as a place of self-reflection.

“I think the history of the B.C.C. just reinforces and reminds me of the struggles and also what it has taken for students of color like me to be able to study here and appreciate studying here at a liberal arts institution where we weren’t always accepted.”

Knox believes programs that emphasize representation in various fields of study is one way to promote Black excellence and support Black students.

“I think continuing to bring in more speakers of color and [of] various different backgrounds is a way to continue to support Black excellence, because it helps when you see that you’re not the only one who’s interested in a particular area of study and seeing other people achieve will help to motivate other Black students here on the campus to go out and do the things that they probably didn’t think were possible.”

Despite Swarthmore having more Black students than her highschool, representation is lacking in her academic spheres of biochemistry and dance. Knox’s positive experiences at Swarthmore have aided in making her hopeful for the future, and she hopes to be an active and engaged alum.

“I definitely want there to be more students of color, specifically in my major, because right now it’s only like me and Tiara [Tillis ’21] that I know of.  In the past, there have been other Black students, and I’m not sure who’s interested now, but that would be something really nice to see. And I hope that the dance program is still going strong. And I just hope that Swarthmore continues to support diversity, and I hope that someday I could probably even come and speak or something like that.”

Imaginative, driven and confident, Knox is persistent and hardworking and wants to live her life intentionally with the goal of gratitude and internal satisfaction.

“I’m just realizing more and more how precious life is, and it doesn’t make sense to do stuff that you’re not passionate about or to surround yourself with negative energy all the time, because you just have to enjoy it.”

November 20, 2020 Nicole Liu 0
Do NOT follow this link or you will be banned from the site!