Opinion » Swarthmore Parties Are Not That Bad 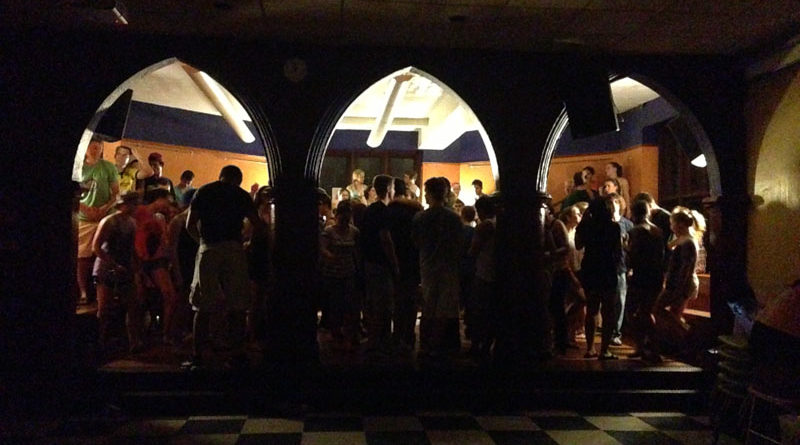 Most Saturday nights, I shamelessly dance my heart out in front of droves of people. The bright lights of Olde Club flash to the beat while I dance slightly offbeat, not particularly caring, or maybe it’s the darkness of Paces, barely able to see those jumping up and down, off by a full beat. Regardless, I always end up dancing my heart out, sweating the stress of the week away and enjoying myself for just a couple hours.

The Swarthmore social scene gets a lot of criticism from both those who constantly go out and those who don’t. This piece is intended to address complaints voiced on the Phoenix article comment sections published on Thursday, Nov. 14, specifically the top voted comment, and as a response to complaints I’ve heard by word of mouth. It is not meant to be a commentary on the many serious issues pervasive in party culture in general that I’m not in a position to speak on because of my privileged position. With that being said, I think abolishing the fraternities has allowed for our small party scene to become more inclusive and more open to the whole community.

The social scene is definitely deserving of criticism, but I also think it’s not that bad. The claims that one or two parties a night is too few, that there’s a small population of partiers, and there needs to be more days to party are unfounded. There’s almost always somewhere to go, smaller parties are not inherently bad, and the rigorous workload given to each student doesn’t leave a lot of time for partying.

Most Saturdays this semester there has been a party for me to go to; every party I have been to this semester has been open to the Swat student body, however sometimes it can be difficult to know where the party is on any given night and not everyone feels welcome at these parties. Without fail, I have not struggled to find somewhere to go on any given Saturday night, something that cannot be said for when I visit larger universities over a break or for a weekend. That’s not to say there aren’t a plethora of parties going on at a large university on Saturday nights, but as a male who is not associated with a fraternity, it’s difficult to find them.

Like many students during fall break, I visit friends who attend larger universities. At least one of the nights when I’m there always involves partying. My freshmen fall I visited UConn to see my brother and several friends. None of them happened to be in a frat, there was no tailgate that Saturday, and none of their close friends were throwing parties — not that it happened often. We ended up walking from party to party, never quite reaching one before they were shut down by campus police. It wasn’t a bad night, but we never made it to a party. Even if we had, it’s possible we wouldn’t have been let in: a band of five guys tends to get rejected from most parties there.

As much as the Swarthmore party scene is criticized, it isn’t bad in the respect that people don’t get turned away from the larger parties on any given Saturday, unless the building is too full. The issue of having nowhere to go, found at large universities, is largely not a problem at Swat. Most parties are open to everyone here: party hosts want more people to come enjoy their parties. There are certainly private parties, but those tend to be hosted by close friend groups, particular sports teams, or celebrating clubs, and those are exclusive. This semester there have been many  open parties where no one is turned away.

Some students complain about how small the party-going population is, and that makes the social life bad, I guess. As someone who likes to meet new people while out, I happen to enjoy the relatively small number of people who go out. Almost everyone I see in Olde Club or Paces or Upper Tarble is someone I know of, which makes it easy for me to initiate a conversation. For some, this small number of people who go out may make it feel like an exclusive group, but this isn’t true in my experience. Swarthmore’s size makes it more conducive to a friendly atmosphere than large bars in College Park.

Every weekend the highlight of my night is seeing someone I see every day, maybe in passing or maybe in person, and finally introducing myself to them. As someone who feels painfully awkward most of the time, I’m given the opportunity to say hi for the first time under the flashing orange lights of Olde Club. Maybe this isn’t great for a hookup culture since every night someone goes out they may see the person they hooked up with last weekend, but that doesn’t make Swarthmore parties bad. What makes my nights fun is being with my friends and forgetting my test on Monday and meeting new people I never would have introduced myself to on my speed walk to Algorithms at 9:28 a.m.

Even though no one came here for the bumping party life, it doesn’t mean we can’t enjoy ourselves once or twice a week, however our expectations need to be reasonable. I hear stories from my friends at UConn and UMD where they go out five, six, seven days a week and they’re never particularly happy about it. It’s almost like a confession after realizing they slept a combined twelve hours and drank more than they could stomach over five days. Once or twice a week is a good balance for me. I don’t want to go out any more, so only having pressure to go out a couple days a week benefits my academics, sleep cycle, and overall well-being.

The Swarthmore social life and party scene get more unwarranted criticism than it deserves when people complain about things like the number of people who go out, how many parties there are a night, and how many days a week you can party. However there are certainly criticisms that are warranted and we need to work towards to improve, such as making all open parties welcoming to all students.

Ultimately, there are the same people each week in the same places and the same music, and there isn’t a big hookup culture. Instead, you can spend your night meeting new people with no other intentions, it’s fun, easy, and leaves you happy with going out. These little interactions with almost-strangers are what makes each Saturday feel different from the last. Of course it might be nice to have more spaces to party and more people who go out or even just different people cycling through, but that’s not what Swarthmore is about. Swarthmore’s about studying and enjoying the hours when you’re not. It’s about a small community where a new friend is one Saturday-night smile away.

2 thoughts on “Swarthmore Parties Are Not That Bad”