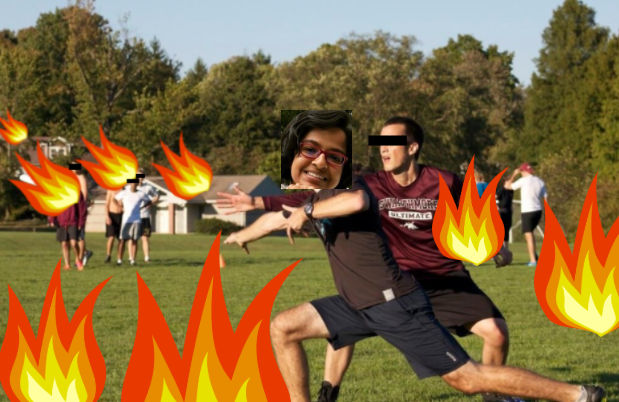 Nearly two months have passed since the Cunningham Fire ravaged Swarthmore’s most beloved frisbee practice field on September 21, 2019. The field has remained barren and fallow in the time since the flames overtook the soft, manicured grass. Students walking past it on their way from Willets to Renato turn away when they walk past the charred strip, saying that its patchiness reminds them of the inevitability of death looming over them. The wintertime has exacerbated its emptiness. As the dead leaves cover the field and the branches finalize their descent from vibrant ivy-covered titans to crooked omens of bleakness and cold desperation, the field looks even more pathetic. The wind, with no structures to make it whistle, passes silently over the barren earth. Sometimes, vultures can be seen circling around and around the entirety of the once-luscious remnant of a bygone era.

The frisbee team is responsible for this chaos. During my last installment of this investigative saga that is sure to be remembered on the scale of the Watergate Scandal and the fraternity document leaks, I uncovered that the Swarthmore ultimate frisbee teams are elaborate guises for an arson club that was forced to go underground in the 1980s after the fiery destruction of the Carnegie Library and one of the Mary Lyon buildings. After all, I uncovered the seemingly-conclusive evidence that “Earthworms Frisbee” and “Warmothers Frisbee” are both anagrams of “Swarthmore Be Fires.” I refused to believe that anyone else could have been responsible for arson on such a thorough scale.

But, despite the thoroughness of my investigation, one mystery didn’t add up — why would the ultimate frisbee teams choose to set fire to their own playing field? Why wouldn’t they have set fire to the practice fields of a Group One or Group Two sports team instead?

I searched tirelessly for more evidence, but between the entirety of the frisbee team blocking me on every form of social media including Goodreads, the Swarthmore College Whistleblower Hotline blocking my phone number, and the Athletics department setting up filters to send my emails to spam, it seemed impossible. Worse yet, after my last installment, the team figured out that I was disguising myself as “Eggs” to spy on their practices. I was at a dead end, and I didn’t know what to do next.

That was, until I started playing around with the online anagram generator that I used to uncover “Swarthmore Be Fires” to begin with. I typed in “Frisbee Team” as a last-ditch effort to uncover more baseless evidence on the Cunningham Fire, and naturally, the generator gave me results such as “Bar Fees Mite” and “A Fibres Meet.” Then, as I scrolled down the list of anagrams, one caught my eye.

I couldn’t believe my eyes. Me? Abetting a fire? It couldn’t be — that is, it couldn’t be unless I was living a real-life Fight-Club-esque horror show in which, unbeknownst to myself, I lived a secret double life as an arsonist. Then again, we’re all overachievers here at Swarthmore, and nothing screams overachiever more than supplementing one’s own academic career with a criminal double life.

Then again, it made sense. Before the Cunningham Fire, I was on a downward decline in my career as a reporter for The Phoenix. After my riveting story about the new housing portal, I knew that I would never attain that level of sheer journalistic passion ever again. I had peaked, and I was doomed to spend the rest of my Swarthmore career drying up as others slowly forgot about my clips that now rotted as scraps in the gutters of this godforsaken college.

I knew that I needed a story, and I needed a good one. One that would give way to my name-achieving fame in the small world of on-campus news reporting. For that taste of sweet, sweet fame, I was willing to do anything. Even unconsciously setting fire to Cunningham Field and pinning the blaze on the frisbee team, who I now realize are innocent.

I’ve never been much of a sleepwalker, and to this day, I don’t know how I must have done it. After all, I don’t own a lighter, don’t know how to access enough gasoline to set an entire field ablaze, and am too clumsy to stand upright most of the time, let alone commit a massive act of arson. But if it wasn’t the frisbee team, it HAD to be me. Right? Right?

In any case, given that the Swarthmore Borough Police Department has started to automatically send all of my calls to voicemail, I haven’t been able to turn myself in yet. Pub Safe also turned me away when I tried to claim culpability for the fire, citing such claims as “Are you that kid who keeps on insisting that Cunningham burned down? Seriously, it’s right there,” and “Please leave us alone.”

For now, I invite you, my peers, to act as jury, judge, and executioner for the Cunningham Fire. Heck, I’ll even do most of your work for you right now by confessing to my deeds:

It was me all along! I committed the Cunningham Fire!

Anatole Shukla '22 is a senior from Fort Wayne, IN. He is also the Editor-in-Chief of The Phoenix.