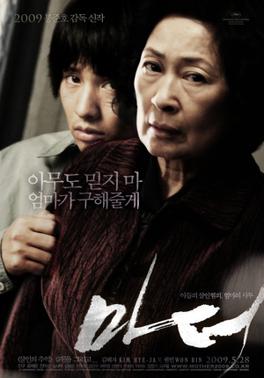 Bong Joon-ho is one of Korea’s most prolific and accomplished filmmakers. He is most well known for his big-budget English-language films, e.g., “Snowpiercer” (2013) and “Okja” (2017), but his Korean-language movies are what I consider to be his most interesting and grounded work. In all of his movies, Bong likes to take classic genres like horror and science fiction and infuse them with social commentary, family drama, and a hefty dose of comedy. 2009’s “Mother” is no different. In this film, he tackles the murder mystery genre with a story about an elderly mother (Kim Hye-ja) and her lovably naive son who is accused of murdering a teenage girl. Her 27-year-old son, Do-joon (Won Bin), has intellectual disabilities and is unjustly coerced into a confession by the town’s abusive and incompetent investigators, a political trope that returns from Bong’s other murder mystery “Memories of Murder.” Only this time, it’s not a pair of bungling detectives but a desperate mother who sets out to solve the crime and prove her son innocent. The result is another tragic and thoroughly engrossing masterpiece.

“Mother” opens with an off-kilter yet beautiful shot of Mother (she is never named) dancing in a field of yellow grass with an eerily empty look on her face, setting the tone for the rest of the film. Much like this opening scene, the entire first act of the movie feels lackadaisical and slice of life. Bong takes his time to introduce the audience to his characters and the sweet relationship between Mother and her childlike son. For instance, Do-joon and his jaded friend Jin-tae chase down a car after being involved in a hit and run, which triggers a hilariously chaotic fight, much to his overprotective mother’s concern. That same night, Do-joon goes out to a bar to meet Jin-tae who never shows up and later leaves the bar inebriated. He then drunkenly follows and catcalls a teenage girl who runs and hides in a black alley. After a heavy rock is hurled at his feet from the alleyway, Do-joon gives up and decides to go home. The next morning, the girl’s body is inexplicably found draped over the railing on the roof of a building, and the defenseless Do-joon is sentenced to jail as an easy target for a much more complicated case. The series of events leading up to the discovery of her dead body may seem completely irrelevant, but like in any murder mystery, every detail matters.

As Mother sets out to discover the truth, these earlier scenes are recontextualized as new information is revealed. Bong masterfully guides the audience through his labyrinthine plot, steadily introducing new characters and clues that take the story to places one would not expect. Throughout these big plot moments, Bong shoots his characters and the action in profile and with a telephoto lens which compresses space and makes the audience feel like they are far away from the characters. By only picturing half of his actors’ face, Bong hides the characters’ expressions and distances them from the audience, creating an uncanny effect. The audience is placed into a position of passivity and can do nothing but witness the mystery slowly unfold before their eyes. Therefore, one constantly feels that there is something they don’t know or being hidden from them; Bong is always more than a step ahead. However, as the audience is allowed to catch up, they not only get closer to the true identity of the killer but also learn more about Mother and her backstory regarding her son. Getting more and more desperate for answers, Mother’s actions become increasingly outrageous as she takes matters into her own hands when no one else wants to help. Inevitably, like in many of Bong’s films, Mother must face her own ineptitude along with her past before she can reach the end of the long and winding road. Perhaps this elderly woman should never have made the first step on this unpredictable and emotionally devastating journey.

One of Bong’s most distinguishing qualities as a storyteller is his obsession with grotesquely incompetent characters, whom he affectionately likes to call “lovable losers,” and putting them in impossible situations. These exaggerated premises are what fuel the powerful drama in his typically dark and tragic films, but what is more interesting is how they make his films so funny. Bong is heralded as a master of tone, not in its consistency but rather in its wild variance. However, unlike the frustrating results of the joke-a-minute formula that all larger-than-life Hollywood franchises seem to follow these days, the laughs in Bong’s movies and especially “Mother” never feel like cheap comic relief that undermine the tone of the film but instead feel authentic and integral to the emotional payoff that the story demands. A part of Bong wants you to laugh at these characters and their ridiculous antics, but another wants you to regret you ever did. And it is this very irony that makes “Mother” so heartbreaking in the end.