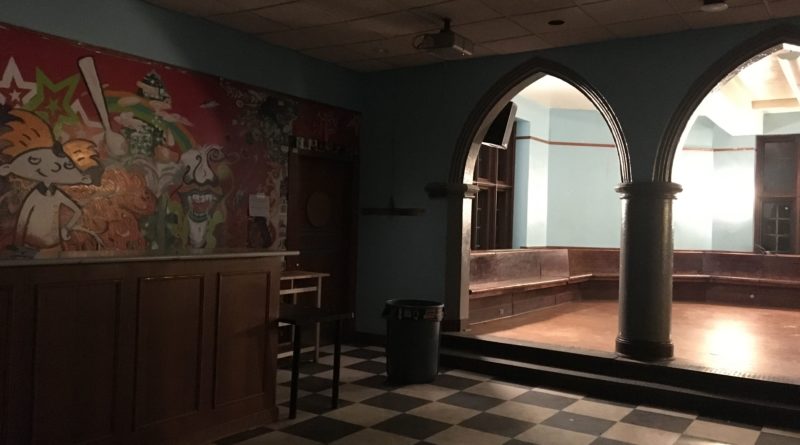 After years of predictions about Pub Nite’s imminent decay, it seems that the long-standing Thursday night tradition is now officially seeing its last days. Donations to the entirely student-funded event have declined due to reinforcement of the ban on drinking games, new party options, and decreased contact with the space itself.

The most significant blow to Pub Nite’s attendance has been Public Safety’s crack-down on drinking games, beginning last spring. Before then, Pub Nite’s first two hours would be devoted to drinking games, and the final hour to dancing.

According to Swat Team Member Sam Sheppard ’21, the event was better attended before the drinking game crackdown.

Reduced interest in Pub Nite as a result of reinforced drinking game restrictions has led to a decrease in donations for the event, according to Pub Nite officer Julia Barbano ’19.

“One person told me that they were withholding their donation to see if they could get drinking games back — which seems pretty counterintuitive. We’re not going to get drinking games back; it’s just too much accountability for the school,” said Barbano. “It’s frustrating that people have that mentality, though, because how can the event even survive if we don’t have the money to run it?”

Not only has funding decreased, but the cost of alcohol has increased.

“Our old vendor from Suds and Sodas on Baltimore Park recently sold the business to someone else. He had been running it for about eight years — he knew Swarthmore students, he knew the people who ran it last year, he knows Andrew Barclay — and now he’s gone,” said Pub Nite officer Natalie Flores-Semyonova ’19.

“He might have been undercharging us because he had been doing it for so long and just knew us so well,” said Barbano. “All we know is that we’re paying more now.”

The Pub Nite team is also half the size it used to be. According to Barbano, in prior years, there have been at least eight officers; this year, there are only four. This is an inconvenient time to have short-staffing, given the school’s new party-hosting requirements. As of this year, parties with 75 people and up now officially need to have three hosts.

“Before our time, a party with any number of people only needed two hosts,”  Flores-Semyonova said. “So now we have four people here to staff at least three for every Pub Nite, whereas before [the Pub Nite team] had eight and were only staffing two.”

Unforeseen marketing work also takes up much of the smaller Pub Nite team’s time because of new changes in ListServ policies.

“We used to be able to send out Pub Nite emails every Thursday,” said Flores-Semyonova. “When [the administration] was trying to streamline the email process … they sort of threw us out of that equation. Now we’re trying hard to try and circumvent that by making flyers and banners and things like that.”

These makeshift marketing techniques, ranging from flyers to Facebook pages and even a video asking people to donate, take away from the Pub Nite officers’ other organizational time.

New social spaces have also taken away from foot traffic in Paces: the student-run cafe has been moved from Paces to Sharples, and fewer people are going to Essie’s because of its shorter hours and fewer meal swipe options. People are simply interacting with the Pub Nite space less.

“People have never seen Paces in the light where it looks nice and has tables [as in Paces cafe],” said Barbano. “Otherwise, Paces is just a random room — literally nothing happens there now.”

The opening of the new PPR Apartments in Fall of 2017 has also drawn former attendees of Pub away from the older Paces space and towards a newer and more glamorous house party culture.

“New PPR is now a space where a lot of the upperclassmen are and can host parties, because they have people who are 21,” said Barbano. “And it is to some degree more attractive, because NPPR is new, it’s a scene that didn’t exist before.”

At the end of the day, however, these alternative apartment parties are not open events. Their increased popularity reflects a larger shift towards private, residential parties.

“My residents seemed to be much more interested in attending Pub Nite last semester than this semester,” said Gillie Tillson ’20, a residential assistant at Mertz Hall.

Students agree that without drinking games, there’s not much else to do in the two hours before dancing starts.

“You can sit there, and you can play cards, but if you’re just gonna sit there and drink with your friends, you might as well do that somewhere else,” Sam Gardner ’19 said. “Now it’s just about the dancing. I went about three weeks ago, walked in at 10:00 after it had been going on for an hour, and I was the only one there.”

Pub Nite’s death means the death of the school’s open, alternative, and regularly-occurring party space, where Swatties could meet each other in ways that wouldn’t necessarily be possible at residential parties.

According to Elizabeth Balch-Crystal ’19, the drinking games at Pub Nite “were really nice, because friend groups would collide.”

The only other regular and open party space is currently Phi Psi, which many students feel is a less inclusive and welcoming space than Pub Nite.

“I feel like the frat parties are less inviting. The crowds that go to Pub Nite versus the crowds that go to the Frats are definitely different,” said Kevin Stewart-Mercurio ’22. “From what I have observed, the Frat parties are mostly varsity athletes. Pub Nite is serving that role of being a non-frat party that people can rely on every week. I feel like without that space, it’s just not going to be as fun for a lot of people.”

For some Swatties, Pub Nite feels like a quintessentially Swarthmorean space because of the relative diversity of its attendees.

Still, there are many Swatties who don’t feel as welcomed in the traditional Pub Nite setting.

“I have a complicated relationship with Pub Nite — I neither love nor hate it,” said Jonathan Galvan ’21. “It’s nice to have party spaces other than the frats and other than on the weekends. But the people who go to Pub Nite are not the people I would usually hang out with — the space isn’t necessarily welcoming to brown, black, POC, and queer students.”

For these students, themed Pub Nites organized by affinity groups provided an empowering and welcoming solution. In these, a group will donate money in exchange for the ability to DJ and create their own theme.

“Queer Pub is so popular because there are so few queer party spaces, so when there are, people are really excited and come out — you can never underestimate the power of a space you feel welcomed in,” Galvan said. “We were looking forward to trying to set up another Queer Pub Nite this semester, but with the funding up in the air we’re not sure if it’s going to work out.”

“I don’t drink at all or go to parties. If I did drink I’d probably like [traditional Pub Nites] more,” said Ben Stern ’20. “But I’m more likely to go to group-hosted Pub Nites — Pub Nite was so boring, so any particular theme was fun. The only fun [Pub Nites] were Quizzo Nights. I wish they did those more because they were some of the best nights on campus for me.’”

“There was definitely more of a turnout to Queer Pub Nite than there was to Frigay,” said Galvan.

For many upperclassmen, the more glorious days of Pub Nite are among their dearest Swarthmore memories.

“Some of my best memories of PubNite were just unassuming nights where you’d go and have weird interactions with people. [They] used to always hang outside in the IC Courtyard. We always used to just go out there and have absurd conversations with people,” Barbano said.

“I was always looking forward to being an upperclassman at Pub,” said Gardner.

Through all of the changes that have contributed to Pub Nite’s demise, however, the beloved “American Pie” singalong tradition has held its ground.

“The ‘American Pie’ closing song tradition is a real community-building thing. I’ve gotten to know people from it. And you can feel a connection with other people,” said Stewart-Mercurio.

The future of Pub Nite has been uncertain for several years now, and Flores-Semyonova and Barbano have yet to find successors. While the event has previously struggled with funding, the culmination of new administrative and cultural shifts has presented new challenges for the event.