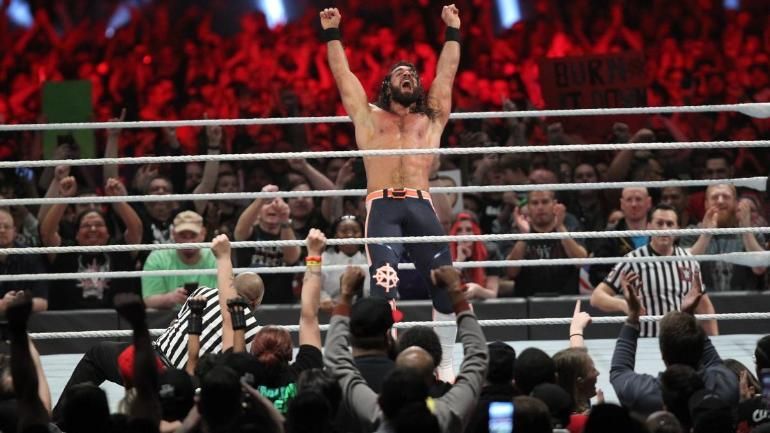 On January 27th, World Wrestling Entertainment held its annual Royal Rumble pay-per-view, from Chase Field in Phoenix, Arizona. Headlined by the Royal Rumble Match (a battle royale featuring 30 competitors — where the objective is to throw your opponents out over the top of the ring), the event also featured title changes, rivalries and plenty of drama all around. Here are some of the top takeaways from the event!

First, in a classic David-versus-Goliath matchup, Finn Balor faced Brock Lesnar one-on-one for the Universal Champion, the world title for WWE’s RAW brand. Balor, the challenger, was the underdog heading into the match, but his incomparable speed and technique gave him the tools to take down even WWE’s strongest competitors. At the same time, his never-say-die mantra and stone-chiseled physique endeared him to the fans, with a dedicated fanbase known as the “Balor Club”. He had a rightful claim to the Universal title, as he had never lost it (Balor had been forced to vacate the title after a severe injury in 2016, after winning it in Lesnar’s absence), and with the endorsement of icon John Cena, it looked like it would finally be Balor’s time to shine again.

But if Balor was chiseled from stone, Brock Lesnar was the mountain itself — a suplexing, fighting machine. With four4 inches and 96 pounds on his challenger, the champion also boasted an impressive resume, with both WWE and UFC title reigns to his name, and a recent Universal Championship reign of 504 days. In wrestling, Lesnar has also had numerous other accomplishments — ending the legendary streak of the Undertaker, destroying John Cena in a matter of minutes for the WWE World Heavyweight Championship, and defeating former wrestling legend Goldberg at WrestleMania 33. And for all of Balor’s support and backing from the audience, when the bell rang, the Beast Incarnate (as Lesnar is nicknamed) was just too much. After surviving an early flurry of offense when Balor targeted his abdomen, Lesnar barely kicked out of the Coup de Gras, Balor’s finishing move, before locking in a Kimura lock submission, and forcing the challenger to tap out. After the match, though, Lesnar appeared visibly angered by the close victory, laying out Balor after the match before finally storming off with his championship. Though he still managed to hang on to his title, the end of the Beast’s reign as Universal Champion could be coming soon.

That end, of course, would likely come at the hands of Seth Rollins, another RAW superstar, and the winner of the 2019 Royal Rumble. The Rumble itself was an absolute roller coaster, featuring returning legends like Kurt Angle, and a plethora of superstars from NXT (WWE’s developmental brand). It even had — not kidding — an RKO to female superstar Nia Jax, who had attacked the original final entrant, R-Truth, and entered the match herself. But at the end of the day, Rollins, who entered tenth, outlasted his opponents, earning himself a match at WrestleMania 35 against the World Champion of his choosing. The match ended with Rollins facing off against Braun Strowman, another RAW powerhouse with his sights on Lesnar, but a curbstomp from Rollins as both men were teetering on the edge of the ring gave Rollins his first ever Royal Rumble win. It was the fitting way to wrap up what has been a chaotic year for Rollins — losing both his former best friends, Roman Reigns and Dean Ambrose, in the same night, and enduring a months-long rivalry with Ambrose after the latter finally snapped. From October to now, Rollins seemingly lost it all — having his best friends, and holding both the Intercontinental and RAW Tag Team Championships, to standing alone without a single title to his name. Now, with a shot to dethrone Brock Lesnar at WrestleMania 35, Rollins has another chance to climb atop the mountain, and become the face of the WWE. With the Royal Rumble victory, this could finally be the year of Seth Rollins.

In the women’s card, the main event featured Becky Lynch, another fan favorite challenger, and Asuka, the dominant SmackDown Women’s Champion. Lynch’s rise to the top of the division was meteoric — berating the crowd and company for never giving her the opportunities or support she deserved, and going on a massive winning streak. Intended to turn her heel (in wrestling, a villainous archetype meant to draw ire and boos from the audience), the change made Lynch even more popular, drawing comparisons to wrestling legend Stone Cold Steve Austin, as both used their rowdiness and anti-authority angles to draw the crowd. After a long title reign where Lynch styled herself “The Man”, feuding with RAW Women’s Champion Ronda Rousey, and her former best friend Charlotte Flair, she finally lost the title to Asuka in a three-way ladder match between herself, Asuka, and Flair. Demanding her rematch at the Royal Rumble, the feud was on between Lynch and Asuka, who had never been defeated in NXT, and had no intention of losing her title so soon. After a back-and-forth match, featuring both superstars using their opponents’ signature moves, Asuka managed to pull out the win, forcing Lynch to tap out to her signature move, the Asuka Lock submission. Though “The Man” had given it her best shot, she just wasn’t enough to defeat the champion. The Empress of Tomorrow, as Asuka is called, was still the champion of today.

Lynch, though, immediately entered the Women’s Royal Rumble match, still determined to make her moment. After the 28th entrant, Lana, was injured and couldn’t make it to the ring, The Man went out for redemption. After finally getting clearance from backstage officials to replace Lana, Lynch stormed down to the ring to Nia Jax, the same woman who had injured her last November. After getting her redemption by eliminating Jax, Lynch was injured at ringside, as an irate Jax dragged her out of the ring and threw her into a set of steel stairs. On one leg, Lynch seemed doomed to come up short yet again, especially after Flair, her last remaining opponent in the Rumble, attacked the bad leg immediately. Yet despite all odds, Lynch managed to pull out the win, taking advantage of Flair’s arrogance to eliminate her, and win the Women’s Royal Rumble. With her eyes set on Ronda Rousey and the RAW Women’s Championship, the stage is set for The Man and the Baddest Woman on the Planet to lay it all out at WrestleMania.

The Royal Rumble may now finally be in the books, but that doesn’t mean the fun is over — far from it. With the Road to WrestleMania finally starting to take shape, the action is only getting started, as superstars aim to cement their place in wrestling greatness at WrestleMania,- the WWE’s equivalent of the Super Bowl. To see how it all unfolds, tune in to your show of choice (RAW on Monday nights, SmackDown on Tuesdays, and NXT on Wednesdays), sit back, and enjoy!