Campus Journal » The Genealogy of Memeology 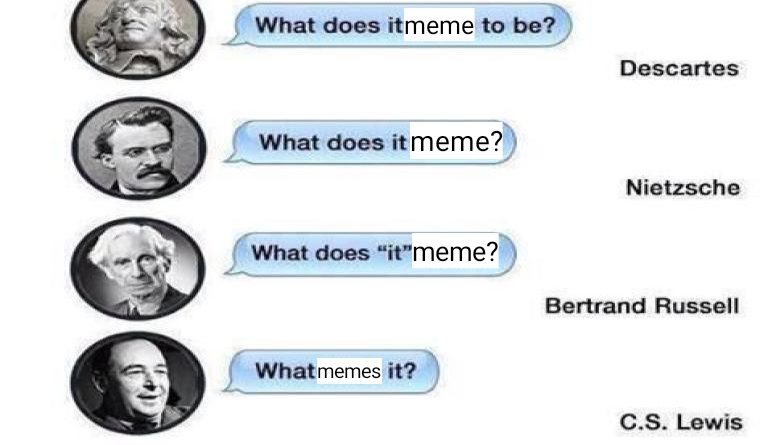 Throughout mankind’s short history one question has permeated, evolved, and perplexed all kinds of human and non-human thought: memes? (acceptable pronunciations: mēm, may-may, mem, mīme, mr. mīme, mem-buh, and/or saw-wee ay own-lee hah-viv ah cahn-t oh-pen-err) But, how does one describe meme? How does one engage with meme? How does one measure meme? In daylights, in sunsets, in midnights, or cups of coffee?!

Meme is not as clear as it seems to be or as it presents itself. Some games, like “What Do You Meme?”, might have you believe in the modern classical notion of a meme as “a humorous image, video, piece of text, etc, that is copied (often with slight variations) and spread rapidly by internet users.” Although this definition captures the spirit of meme, it has two major problems. First, it locks us into a post-internet time that is both limiting because memes existed way before the internet age, like snails versus knights, and classist, as not everyone has access to internet. Secondly, it puts too much emphasis on the thing itself, meaning the physical representation of the meme.

Memes are not just images, videos, or pieces of text, they are a wholeness of experience that incorporates context, culture, creator, audience, tertiary audiences, and meta-references of other memes or cultural ideas wrapped into singularity with the intent to offer up and extend ideas, notions or other kinds of shared experiences with other people. This idea is better explained by the Merriam-Webster dictionary, “an idea, behavior, style, or usage that spreads from person to person within a culture.” The important idea here is that memes have or had a purpose: a sharing of ideas, behavior and culture. As English ethologist, evolutionary biologist, and author Richard Dawkins explains, “Memes (discrete units of knowledge, gossip, jokes and so on) are to culture what genes are to life. Just as biological evolution is driven by the survival of the fittest genes in the gene pool, cultural evolution may be driven by the most successful memes.” Memes are not in culture, they are culture, specifically they are they stage in which cultures clash, morph, mix, vie, die, and evolve.

But things got hella muddy, yo, when the interwebs emerged. Originally, these early internet memes were very much deeply in “engrained” in “lived” “experience” of mostly Western “first world” “cultures.” For example, let’s take a look at the classic yet not forgotten “True Story.” This meme was used in Rage Comics (Ripperoni) from the early 2000s and utilized a cartoonized Neil Patrick Harris holding a wine glass saying “True Story” often put at the end of the comics to convey that the contents of this comic either really happened or “it really be like that sometimes.” But these early memes separated themselves from their rage comics roots to represent certain ideas: Me Gusta is associated with feelings of pleasure, and the Troll Face is usually associated with assholes.

This separation ushered in a new era of memes we will dub The Bottom Text era, more commonly viewed as the modern meme format. This era used pop culture images and stock photos that represented some sort of idea or feeling. The biggest characteristic of these memes were that there were always two lines of text — a bottom text and a top text. The top text is usually expository to the original idea or feeling while the bottom usually held some sort of punchline related to the top line.

Examples include the relatable and accurate One Does Not Simply…, which takes from the iconic Lord of the Rings’ scene of Boromir’s  “One does not simply walk into Mordor,” but the irony is that is exactly what happens, and the topical and apt Brace Yourself (Rip In Peace Californians) takes from Game of Thrones’ Eddard “Ned” Stark asking one to brace themselves because of an anticipated event. These memes actually provided a character-defining aspect of membership: iteration. Often the bottom texts would be changed to fit different situations. Over time, we saw memes blending and borrowing punch lines from other Bottom Text memes. Thus in an almost paradoxical way, the distinction between the meme meaning or as the kool cats say nowadays, the memeing, and the meme object began to blur and shift. This era began the shift of memeing from the thing itself, the images, to a more intangible culture of contexts and layers.

But in 2007, with the invention of YouTube, we saw a new cultural shift in memeology: the viral video. From Evolution of Dance to Go Blah, and  Charlie Bit Me (and its remix and trap remix, and yes they in fact “slap”), viral videos bursted on the scene, like the latest Smash ultimate character you’re “totally” going to main, with fresh and original content. Here again we see the notion of iterability as these videos often got spliced into new content or remixed. YouTube personalities arose shortly after, and with these personalities came cults and fandoms in meme culture. This forgeda new relationship between the creator and the audience. No longer are memes aimlessly wandering on-the-line separated from their creators and/or “intended” purpose. (Also shout out to Vine).

Okay this article is getting too long, so we’s gon’ get to good stuff. Online, you’ll never find a more wretched hive of scum and villainy than social media timelines. Remember when I said memes had a purpose? Yeah, me neither. Anyways, social media in general jumpstarted our usage and evolution of memeage. Memes are created just as fast as they are forgotten. We’ve gotten so good at memeing that it has lost its “memeing.”

Let me reiterate (there it is again), memes were meant to spread social behavior and cultural ideas. However, now memes can’t even last as much as the flavor of a juicy fruit gum. Hence, any lasting shared experience from these memes seem to not have any real lasting impact. This evolution pushed a new kind of counterculture within memes, know as our modern-day shitposting and normie memes (If I have to explain what a normie is, well, I got some bad news for ya’). Shitposting tends to be very niche and stands either as a direct criticism and commentary on meme culture — culture in general, usually having ironic and mocking undertones — or they are just weird postings devoid of any deeper meanings fully accepting and recognizing that memes have lost their memeing, but that never mattered anyways.

However, there has been a recent development memeology evolution, one that incorporates all the iconic themes of memes but adds so much more and destroys so much: Can’t-Opener-ism. Can’t-Opener-ism, also known as can’t opener memes are a sub-branch under the wider Dakotaisms (honestly, Dakotaism has too many layers to go in depth), which pushes the limits of the defining meme aspects. Can’t Opener-ism actually began two years ago in the Swat Summers page, when a student lovingly asked for a can opener. The “Creator” commented the famed last words, “Sorry I only have a can’t opener.” This original comment had a mixed reception, however, it was not well appreciated by the student. Adverse reactions to Dakotaisms helped perpetuate its continued use and influence.

Soon after this original incident, this same student continually asked for things all summer long of which the Creator would comment the Can’t-Openeristic phrase. Each time it become more and more incoherently related to the item being asked for but instead attached itself to the question itself: asking for something. It seems like Can’t Opernism evolved past its initial stage of being mere Dakotaism but branched into its own entity focused on bring attention to the question and hence attention to call for help. However, in a weird double move instead of being helpful Can’t Opernism as done only the opposite more less calling attention to itself and not toward the call for help. This double move is locally known as The Curse of the Can’t Opener or The Can’t Curse, where in which when the Can’t-Opener-istic phrase is found the original content of the post gets washed away.

It was not before long that others would join in, too. In the first Swat Summer’s page the Can’t-Opener-isms were mostly kept at a minimum, popping up here and there only by the Creator. However, in a few cases the Can’t-Opener-istic phrase began to be used by others besides the Creator, and in rarer cases by the poster themselves. The years that followed the usage of Can’t-Opener-isms have been relatively active but always died down by the start of the school year.

Can’t-Opener-ism is usually restricted to Swat Summer pages, however during the 2018 page, the Can’t-Opener-ism began to catch on more than a meta-relevant Pokemon on community day. It is unclear whomistive was the first one to use Can’t-Opener-ism outside of the page, however, once it happened, the Creator knew there was no turning back.

Eventually, Can’t-Opener-isms evolved past their initial usage and soon became theirown meme genre. The construction of the Sorry I only have a can’t opener Facebook group serves as a bridge between the Can’t-Opener-ism’s meme genre and usage, as the page itself harbors the Can’t-Opener-isms, but the page can also be used in the comments to Can’t Openerize. As the Can’t=Opener-ist phrase gets used over and over again, it loses its funny factor (the funny factor is a complex mathematical formula for calculating the funniness of a meme, the formula goes F = OC + C + (-1*R^2) – NX; where F is Funny factor, OC is original content-ness, C is for context and culture, R is repost, and NX is net exports, usually negative at least in the domestic US ), but in its overuse almost becomes expected and ironically or rather paradoxically funny?

So what is a can’t opener? This is a serious question not only in the minds of the can’tees or can’ts, also known as the followers of Can’t-Openerism, but in the mind of the Creator too. They are not sure what exactly it is or what form it takes. Perhaps it is more an intangible internet object that has captured or even ushered in its own zeitgeist. Maybe it is more of a panoptic object people can use to impose their personal power, showing that no one is safe from the can’t curse. Perhaps it is actually a physical object that manifests itself in the material world, and this deep and rich metaphysics and lore are but mere speculation. The Creator has made known that they have designed what a can’t opener would look like and function as, however, the patient is still pending. They have also stated that they have begun conceptualizing a model for can’t opener 2.0. Or most likely, the Creator means it literally in stating that they literally only have a can’t opener that is all that they own.

On the other end, what are can’t opener memes? In short, they are memes that are usually generated or curated by the Creator, usually having tons of layers and meta references that are not totally apparent, but only fully make sense to the Creator themselves. These memes have this level of absurdity and incoherence that seem to critique and make fun of both shitposting and normie memes, while in a weird twist being both normie and shitpostric. Can’t-Opener-ism lives within this blurred line between the limits and distinctions. The Creator notes that the overall theme is what’s funny to them, but they are unsure why other people like them or find them relatable.

In the end as we began with only questions, and I wish I had answers for you, but sorry I only have a can’t opener.