Brian Goldstein, assistant professor of art history at Swarthmore College, explores the topics of architectural history, modern architecture and planning, and the intersections between race and the American built environment in the courses he teaches. This summer, he continued research for his second book, “Bond: Race and the Modern City,” which explores the life and work of famed African-American architect, J. Max Bond, Jr. (1935-2009), in relation to the larger crossover between race and the built environment.

Professor Goldstein has been a member of the Swarthmore academic community since the fall of 2017, teaching courses like “Architecture of Philadelphia” and “Global History of Architecture.” As he sits near his desk in Beardsley 204 surrounded by sleek, grey furniture and architectural books, he begins to share what drew him to Max Bond and what he ultimately discovered throughout the course of his research.

Rather than choosing a well-known, widely-celebrated architect like Frank Gehry or Ludwig Mies van der Rohe, Professor Goldstein chose Max Bond, an architect whose racial identity and subsequent fewer opportunities in the design world rendered the research process much more complicated than straightforward. Goldstein was especially drawn to Bond because of the lack of harmony between Bond’s childhood and young adult experience in a highly-educated family and his lack of attention as an architect due to his race. Bond came from an exceptional African-American family of educators. He was born in Louisville, Kentucky, but also spent parts of his childhood in New Orleans, Tuskegee, Port-au-Prince, and Atlanta. His father, Max Bond, Sr., worked at numerous historically black colleges and universities while his mother, Ruth Clement Bond, served a variety of roles from president of the African-American Women’s Association to the head of the English Department at Kentucky State College. Despite his exposure to education, world cultures, and various social movements,  his race ultimately affected the amount and kinds of architectural commissions he received. Goldstein concluded his opening by saying, “Max Bond engaged with lots of different discourses that interest me, from architectural form to equity. I like to think about history through extraordinary people or places that nonetheless can teach about their period and contexts more broadly, and I think Bond can do that in a way that is really unique.”

A new grant from the Graham Foundation for Advanced Studies in the Fine Arts ultimately allowed Professor Goldstein to fully commit to this summer research. The grant simultaneously reaffirms the importance of Goldstein’s research while also providing the necessary means to continue archival work. Goldstein recounted that while the new project seemed daunting at first, the excitement found from sifting through old archives bursting with letters and accounts soon prevailed.

One component of his summer research was exploring Max Bond’s upbringing and personal relationships. Professor Goldstein conducted many interviews about Max Bond; he believes these interviews will inform a significant part of “Bond: Race and the Modern City.”  Goldstein recalled that at first, he was a bit nervous about the interviews; however, after completing the first set of interviews, he now feels generally excited about them. He stated that, “The amazing thing is that I had always heard that Bond was a really thoughtful, gracious, and generous person, and everyone has confirmed that in their own way.”

He has now completed ten oral interviews with a range of people — Max Bond’s sister, former co-workers, college and graduate school classmates, friends, and students. Goldstein affirmed that his favorite interview was with Jane Bond, Max Bond’s sister. He stated that “Siblings have good stories, lots of memories, and a view into a person’s young life that is almost impossible to get anywhere else.” He was also struck by the interviews he conducted with four classmates — two white, two African-American, two architects, two not — of Bond’s in both Boston and Cambridge; he was fascinated by how their professional and racial identities influenced the different perspectives they had on Bond and on Harvard in the 1950’s.

Along with the interviews, Professor Goldstein spent time in New York City conducting archival research in Columbia University. He looked at both personal and professional papers, including letters Bond wrote to his parents throughout college. From the letters, Professor Goldstein gathered that Bond first acquired his interest in architecture in his undergraduate studies. His favorite letter was written in August, 1963 to Max Bond’s parents; Bond wrote of visiting Frank Lloyd Wright’s home, Taliesin, in Spring Green, Wisconsin — a pilgrimage that many modern architects made at the time. Goldstein went on to describe, “…but then Bond drove to the March on Washington and attended that too. For me, that really highlighted the worlds that Bond inhabited: someone educated at the peak of architectural modernism who also was always thinking about social justice and civil rights fights that were ongoing.”

Motivated and inspired by the educators and leaders around him, Max Bond graduated Harvard in 1955 and went on to receive a master’s degree from the Harvard Graduate School of Design as well; he was one of eleven African-American students in the undergraduate school and the only African-American student in his architecture graduate program.

This intersection between race and architectural success continues to be a throughline in Bond’s career. After graduate school, Max Bond worked in the New York City architectural firms of Gruzen & Partners and Pedersen & Tilney and later moved to Ghana where he designed numerous government buildings. After moving back to the U.S., he served as the head for the Architects’ Renewal Committee in Harlem, where Goldstein first discovered the little-explored importance of Bond, before co-founding the architectural firm, Bond Ryder & Associates. A few of the firm’s notable structures include the Martin Luther King Jr. Center for Nonviolent Social Change in Atlanta, the Birmingham Civil Rights Institute, and Harlem’s Schomburg Center for Research in Black Culture. As suggested in the sites’ names, most of the architectural structures Bond designed have an importance beyond formal choices. Goldstein firmly believes that Bond’s architectural practices reaffirmed the compatibility of architecture and activism. Goldstein added that, “Bond had a really three-dimensional and complex understanding of the ways that race shapes architecture and architecture shapes race, and I feel that I am only at the beginning of understanding that understanding.”

Professor Goldstein’s summer research sparks an important question that is often ignored – how can an industry that defines and dictates the American built environment be comprised of a mere two percent of African-American architects? Questions like these reaffirm the important intersection between architecture and sociology and remind researchers, educators, and designers alike in the field that the social history of a space — the history of a building through the lens of how it is used and by whom – is just as significant as the architectural history of a space.

If the history of architecture and the built environment interests you, explore the art history course catalogue to view Professor Goldstein’s course listings available in the spring of 2019. 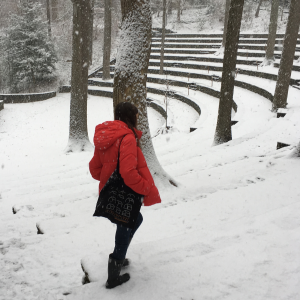