News » Where is U.S. Foreign Policy Headed? A Lecture by Stephen Walt 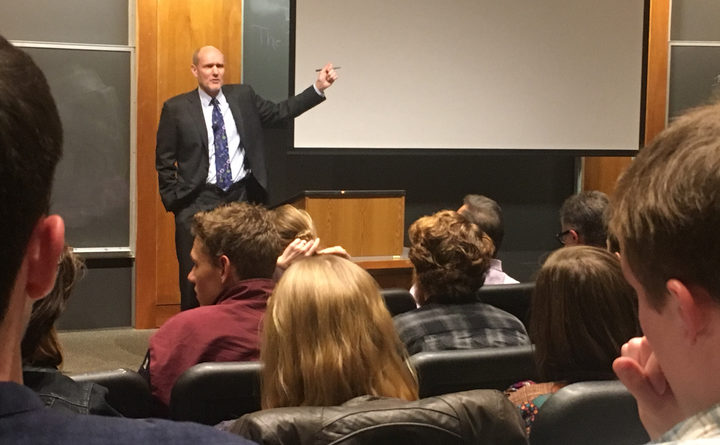 On Thursday, October 26th, students and faculty packed into SCI 101 to hear Harvard University Belfer Professor of International Relations Stephen Walt deliver a lecture titled “Where is U.S. Foreign Policy Headed?” as part of the Phi Beta Kappa Visiting Scholar Program. Walt is a prominent and often controversial figure in the realist school of international relations, which holds that the international system is defined by power contests. In his lecture, Walt explored U.S. foreign policy under the Trump administration through a realist lens.

Swarthmore Associate Professor of Political Science Ayse Kaya introduced Walt by reciting his lengthy list of credentials. “It’s not just his overwhelming list of accomplishments that set Professor Walt apart but his ability to compellingly argue that conventional wisdoms in U.S. foreign policy may not be so wise after all,” Kaya said.

Walt began his lecture by reflecting on the current state of U.S. foreign relations. “I think it’s fair to say that there’s more uncertainty on this topic than there has been in any time in recent history,” he said.

In the decades since the Cold War, Walt remarked, D.C. policy advisors have relied on a strategy known as “liberal hegemony,” or a belief the U.S. should prioritize spreading institutions like globalized markets, democracy, and human rights around the globe. Walt recounted the sum-total effects of this strategy as a “costly failure,” citing, among other things, the U.S.’s failure to prevent its rivals from acquiring nuclear weapons, prolonged involvement in Iraq and Afghanistan, increasing global anti-Americanism, and the recent collapse of several fledgling democracies propped up by the U.S. “It’s that track record of failure that helped open the door to Donald Trump,” Walt said.

Walt argued that, by electing Trump, voters expressed support for a departure from recent foreign policy. On the campaign trail, Trump promised an “America First” policy, or a policy that would deemphasize alliances and institutions and would prioritize American interests.

However, since entering office, Trump has done little to implement this “America First” policy. Instead, the administration has continued to implement pre-existing policies. The administration carried out a strike in Syria after the Assad regime used chemical weapons, despite previous claims that it would not counter international human rights abuses. Trump’s cabinet is also heavily populated by establishment generals, who have long subscribed to liberal hegemony. Furthermore, Trump has picked petty fights with foreign leaders and his administration has committed many gaffes, which serve to, as Walt described, “convey the impression that the United States and its leaders don’t know what they’re doing.”

What is most different about the Trump foreign policy administration as compared to recent administrations, Walt argued, is not its policy differences but its “sheer incompetence.”

At this point in his talk, Walt offered up hypothetical suggestions for what the president could and ought to have done. As a self-described “card-carrying realist,” Walt offered support for some of the original intent behind “America First” but dismissed the president himself as “an incompetent, inattentive leader” with little interest in foreign policy.

In Walt’s ideal United States, the hypothetical administration would occupy themselves primarily with “preventing other great powers from dominating its own region.” This policy means that the U.S. could withdraw power from Europe, since Russia is not a legitimate military or economic threat that cannot be contained by European countries. However, the U.S. will have to create a “countervailing coalition” in Asia so as to prevent China from dominating the region. Walt sees China as a unique threat and as a situation that President Trump has handled incredibly poorly. By withdrawing from the Trans-Pacific Partnership, for example, the U.S. lost a powerful economic position in the region. Trump has also vastly complicated relations with Russia, making it unlikely that the U.S. will be able to turn Russia against China.

As for the Middle East, Walt advocated for a hands-off policy that relies on “the creation of stronger local institutions.” He also recommended that the U.S. avoid granting special, unconditional alliances to countries in the region.

Though as a realist Walt does not base his theory around human rights, he did suggest that “instead of ignoring democracy and human rights as issues, we should promote them… by setting a good example in the United States.” As a caveat, he added that “spreading democracy by local regime change doesn’t work.”

In summary, Walt outlined a foreign policy strategy that would be a great departure from the current liberal hegemony. He also made abundantly clear that this strategy will likely never be implemented under the Trump administration.

Students were cautiously receptive of Walt’s theory and recommendations. Audience members asked questions about when Walt might think it is acceptable to intervene in the Middle East, human rights abuses in Tibet and in occupied Palestine, and why China might be a threat to U.S. power. They also accepted advice on how to find reliable news sources.

In a particularly resonant moment, Walt ended his talk by recalling a quote often falsely attributed to the first German chancellor Otto von Bismarck: “There is a special providence that protects idiots, drunkards, children, and the United States.”

“Now, more than any other time in my life, I hope that Bismarck is right,” Walt said.