News » Someone Stole Baseball Equipment and Made it Spell “Occupy A1” 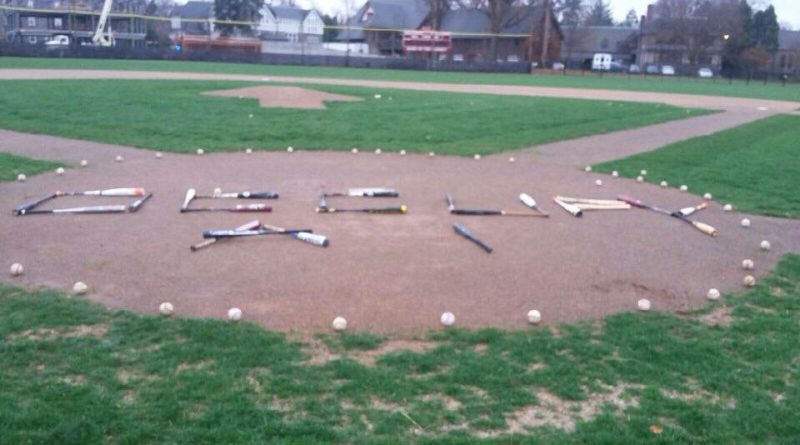 It was a wet, rainy, muddy day on December 6 when the Swarthmore baseball team found that their equipment had been put out onto the baseball field and arranged to spell out “Occupy A1.”

“Occupy A1” refers to the time when, following the creation of the Facebook event titled “Fuck The Fratriarchy”, a group of mostly women sat at the “A1” table— the dining table nearest the compost— in order to displace the students that generally sit there. The students were primarily men, many of them baseball players.

“We thought it’d be funny to mess with that dynamic a little,” said Ploy Promrat ‘19, one of the original “Occupy A1’s” organizers, in a statement to The Phoenix.

When asked about the incident regarding the baseball equipment, Morgin Goldberg ’19, another organizer of “Occupy A1”, maintained that neither she nor the organizers of the Facebook event had anything to do with it.

“I don’t know why anyone would do this, and I don’t think it’s an okay thing to do,” she wrote in a statement to The Daily Gazette. Goldberg further went on to write that the incident doesn’t represent the spirit of “Occupy A1,” which was intended to be a low-stakes social experiment.

Some members of the Swarthmore baseball team have expressed concern regarding potential damages that may have been caused to the equipment as a result of the rain.

Michael Hill, Head of Public safety, confirmed in a written statement that Public Safety received a report regarding a theft from the Field House equipment room. While Hill does not typically comment on active cases, he wrote that an investigation is underway.

“We will make every effort to identify the responsible individual(s). If you or any of your readers have information that would aid in the investigation, please let me know,” Hill wrote.