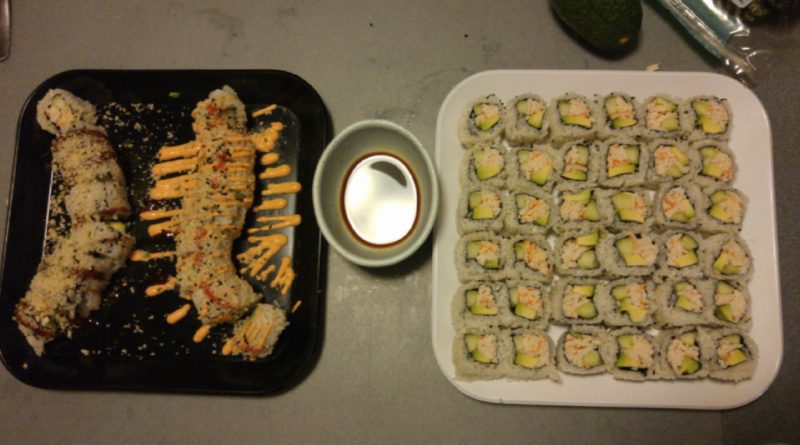 It’s 11pm on a Friday night. Sharples is closed. Essie’s is closed. Walking to the Ville is out of the question. Your stomach is rumbling. A month ago, you had nowhere to turn.

But two weeks ago, a new food service opened: Late Nite. Late Nite delivers homemade sushi right to your door.  Natasha Markov-Riss ‘20 came up with idea for the business after seeing Henry Han ‘20 serve sushi out of his dorm room.

Before coming to Swarthmore, Han had spent six months training as a sushi chef. When he got here, he started making sushi in his room in Willets and giving it away to friends.

The demand was huge. “I would literally serve the sushi and it would be gone before I even set it down,” Han said.

“People would run down the hallway to make sure they got there before it ran out,” said Andie Battin ‘20, a friend of Han and Markov-Riss who delivers food for Late Nite.

Markov-Riss decided to capitalize on this demand and began talking with Han about starting a business just two weeks after the semester started. This is not the first business venture for Markov-Riss, who has a dumpling food truck at home and has opened “a few small businesses.”

Late Nite is open on Thursday, Friday, and Saturday nights, opening at 10pm and operating until they run out of food.  Even in just two weeks, Late Nite has noticed the orders getting larger—whole clubs and study groups now place orders.

Reactions to the business and their food have been overwhelmingly positive.

“We have had a couple return customers the same night, and other people are like ‘Wow this is so amazing; it was so fast’ or ‘The food was great,’ so it has pretty much been almost universally positive reactions,” Late Nite deliveryman Max Katz-Balmes ‘20 said.

“We have a lot of customers that are buying every single day […] We have been open for two weeks, and we already have loyal customers,” Fay Blelloch ‘20 said. Belloch also delivers food and is Markov-Riss’s roommate.

The only complaint Late Nite has received: “We are not open late enough because we sell out,” Han said. “Every night we buy more materials to try and compensate for the demand, but every night we still sell out in the same amount of time […] It’s hard to meet the demand.”

Late Nite is now in the process of becoming a limited liability corporation, or LLC, and getting a business license. They are also talking to insurance agencies about getting commercial insurance. Once they have insurance, they hope to be able to partner with the Swarthmore OneCard, so that students can use points to order food.

The Swarthmore community has been extremely supportive of Late Nite.

“Since we have had this idea, everyone has been trying to help us,” Han said. People have offered help with posters, website design, and creating shirts and bucket hats. They have also had offers to make an app, and some have volunteered to deliver for free.

But delivery people for Late Nite are paid. They make minimum wage, plus tips.

As Late Nite evolves, so will their menu. This process has already begun. When Late Nite first opened, they were selling both dumplings and sushi. However, they have decided to focus only on sushi. They were having trouble keeping dumplings warm when delivering since the weather got colder.

“It was a kind of a tough business decision because people loved the pork dumplings, but it was just becoming inefficient to be trying to make the dumplings and the sushi, and it wasn’t sustainable,” said Markov-Riss.

Late Nite is also thinking of adding other items to the menu such as chips and guacamole, mac and cheese, or bubble tea. “We have to balance what people like with what is logistically feasible for us to deliver,” Markov-Riss said. Salmon sushi is coming to the menu soon.

The days Late Nite is open may also change. They are considering closing on Saturday, both because remaining open on Saturday means they cannot go out and because orders on Saturdays are much later than other nights. However, they may also expand to Sunday nights.

Late Nite is committed to ensuring their food is of high quality and safe to eat. To prepare for opening the business, Han renewed his food handler’s license and Late Nite found a commercial kitchen on campus where they could prepare the food and meet health standards. Ingredients for Late Nite’s food comes primarily from Restaurant Depot. They make sure all the fish they use is sushi grade and fresh.

“I really pride myself on keeping the food fresh because sushi is really easily contaminated,” Han said. They are able to do this by buying all highly perishable ingredients (fish, cucumber, and avocado) on the same day they will be sold.

In addition to their declared commitment to providing high quality food, Late Nite says they are also committed to helping the Swarthmore community. Ten percent of their profits are donated to the Swarthmore Alternative Party Fund.

“We’re serving people late at night as people are going out and are at parties, so we wanted to stay with our late night theme and support consensual party spaces,” Markov-Riss said.

Late Nite opens at 10pm on Thursdays, Fridays, and Saturdays. Order early in the night or pre-order to make sure you can get food before they sell out.

Late Nite delivers for free to all on-campus dorms and academic buildings. (They do not deliver to PPR, Woolman, Kyle, or ML.)