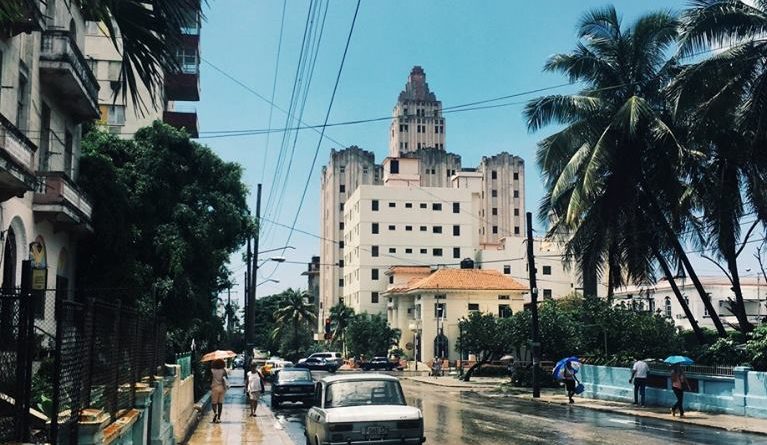 To all those I know, I hope your years are going well; for all those I don’t know, I hope I will have the chance to know you. In the meantime, I’m here in Cuba finding out the true definition of tropical — humid, hot, a noticeable lack of seasons, and when it rains, it pours. I’m about a month and half into my time here, and it’s been beautiful, challenging, and “just school,” too.

“Just school,” too. “Yeah,” they say, “go abroad, it will be an amazing experience!” You’re so excited, and soon, you’re in your respective country, breathing and exploring and living. You’re in a city, an actual city, not just 30 minutes outside of Philly. Then, school starts, and you’re at the beginning again. At least, that’s how this part has felt for me. The University of Havana is broken up into several carreras (careers) that you enroll in as a first year. These would be, for example, the school of sociology, history, computer science, economics. They are sort of similar to majors, but your whole schedule is predetermined; if you are in this carrera, you will take a specific set of classes. Coming in as a foreign student, you mess their whole schedule up by taking whatever you want. Hence, why I’m taking fifth year sociology of gender and third year history of the environment (oh yeah, they also have five years of undergrad here). I am, maybe a little less than at Swat, diligently studying and turning in homework, papers, and tests. It’s still college, just in a different country … but I guess you could say there are a few differences.

Challenging: I’m not sure if anyone told me it would be, but living in a country where they speak a different language that you’re trying to learn is a constant upward battle — you trip and fall a lot, especially for me because learning Spanish is fairly personal. Being adopted from Guatemala, with parents who couldn’t teach me my native tongue, I’ve had to work to be able to speak Spanish myself. Messing up 100 times a day makes you feel small, especially when “you’re supposed to be able to do this,” but you get back up. You keep trying. Then, de pronto, estás aprendiendo mucho y entiendo más.

Beautiful: I don’t know if I have the words to capture the beauty of Cuba. The malecon at sunset is something I’ll never forget. Riding in old cars is cool, but what’s cooler is getting to know the people who drive those old cars. One of the people I’ve met has been driving his maquina (the old cars that work like taxis in Cuba) since he was 15 years old. He’s 40 years old now. If you’ve never heard of La Fabrica del Arte Cubano, you should look it up now. I’m doing my final project on FAC — I’ll be spending a lot of time there. It opens again this Thursday, and I couldn’t be more jazzed. Really, the most beautiful thing is the people you meet.
An anecdote: Yesterday, I needed to find a book for my research, and I walked into a book store. There, two older folks took some interest in what I was looking for. For the record, these are all government-run facilities. There’s not much incentive, in a majority of the Cuban service industry, to do a stellar job. Everyone in Cuba gets paid the same amount each month, the equivalent to 20 USD. In my opinion, it’s not that bad when you take into account that the state is also subsidizing gas, electric, water, housing, food, etc., so why would these people even bother helping me? They love books and like people who like books, too. They were thrilled to have someone interested in what they had to offer. I was happy too; they helped me find the book I was looking for. Amplify this situation. It is something that happens across this city a thousand times a day. Living here, I am a walking, talking, studying student-diplomat. Cuba-US relations are being played out on a local level every time I walk into a cafe or get on a bus or go to the library or sit on the malecón. The Cubans know this, and I know this. It’s not as tense as you’d think — it’s really quite beautiful.

So here I am, immersed in a country that speaks Spanish, where the government doesn’t acknowledge racism, where education is completely free — yes through college. Where a Coke costs 1.50, but a national soda costs .80; where the beach is 25 minutes away; where you eat eggs everyday; where women are cat-called relentlessly when not accompanied by a man; where abortion is free; where the US embassy has walk-in hours; and you can vote (highly recommend this point, but I think over there, as they say in Cuba, you don’t need to go to the embassy). Where you walk in the streets blasting Cuban rap from your jam box at 2 in the morning, where the sun and the rain beat down, where a picture of Fidel is in almost every house and business, where you can buy juice box-esque cartons of rum, where you literally drink three or four cups of Cuban espresso everyday. This is Cuba, some things may never change.