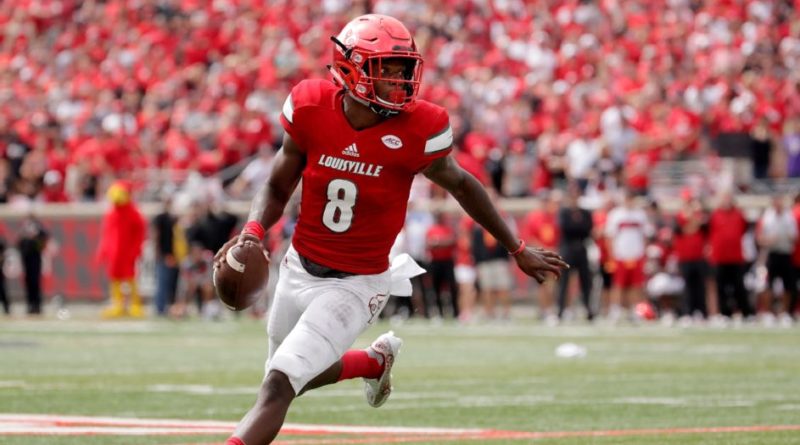 There are only two words to describe college football this week; Lamar and Jackson. Admittedly, I could use those words every week – that’s just how dominant the University of Louisville quarterback has been through these first four weeks of the season. It’s not just the offense that is firing on all cylinders; Louisville’s defense has looked stellar as well, only allowing Florida State, a powerhouse that was projected to contend for the national championship, to score 20 points against them. They held Florida State’s star running back, Dalvin Cook, to just over 50 yards on rushing. To put that in perspective, Cook rushed for 267 yards against the University of South Florida this week. However, when looking at Louisville’s dominance, your go to star performer has to be Lamar Jackson. Jackson has not finished a full game this season because Louisville has been ahead by that much in all of its games. Louisville pulling Jackson from the game because its team was up by 50 points was the ultimate insult for Florida State.

Despite his limited action, Jackson’s statistics are absolutely incredible and possibly unprecedented, and the fact that he’s played for so few minutes makes them even more impressive. Jackson has passed for 1330 yards through four games and thrown 13 touchdown passes. He’s rushed for 562 yards and 12 touchdowns in those same four games. That’s 25 touchdowns in only one-third of the regular season played. Based on his current statistics, Jackson is on track to be the first quarterback to ever throw and rush for at least 30 touchdowns. He’s currently fifth on the rushing yardage leaderboard, the only quarterback inside the top 20. That’s ahead of Heisman Trophy hopefuls Nick Chubb, Georgia’s running back; Leonard Fournette, Louisiana State University’s running back; and Christian McCaffrey, Stanford’s running back. The current record for rushing yards by a quarterback is held by former Air Force Academy quarterback Beau Morgan, who rushed for 1494 yards in one season. Jackson is on pace to shatter that record with 1786 yards in the regular season alone. This projection is completely unprecedented.

We’re only four weeks into the season, and Jackson already looks unstoppable. Yet, somehow, Louisville isn’t the number one team in the nation. It’s number three, Alabama and Ohio State ranking ahead of them. Those spots are Alabama’s and Ohio State’s to lose. Alabama is coming off a 48-0 thrashing of Kent State, the alma mater of Alabama coach Nick Saban. Alabama is 4-0 after dominating performances against the University of Southern California, Western Kentucky University, Kent State University, and a spectacular win against the University of Mississippi (Ole Miss). Despite their success following up a national championship winning season, this dominance isn’t the sort of Alabama team we’re used to seeing. The defense is still stifling despite the secondary getting burned multiple times in the Ole Miss game. The offense is nothing like we’ve seen before from Alabama. The university is known for its power running with running backs such as Eddie Lacy, Trent Richardson, and last year’s Heisman winner Derrick Henry. Despite the running game still being fairly strong this year, we haven’t seen a dominant ‘back who gets the majority of carries and who racks up rushing yards like he’s mowing grass. Actually, a lot of the rushing is coming from freshman quarterback Jalen Hurts, which is a surprising choice by Alabama that traditionally hasn’t used dual-threat quarterbacks. A freshman quarterback is another rarity in the Alabama offensive scheme. We’re used to seeing a veteran quarterback with a few years under their belt, serving as the centerpiece through which the offense, especially the running game, functions. Hurts, despite being a freshman and only getting his first start in the second week of the season, has not been afraid to air the ball out, especially to sophomore wide receiver Calvin Ridley – and it’s worked for them, but we can’t talk about the poise and comfort of Hurts without going back to that Ole Miss game. Ole Miss is one of the best teams in the country. Chad Kelly, their quarterback, is probably the best in the Southeastern Conference. That’s why Mississippi jumped out to a 24-3 lead over Alabama approaching halftime. If Ole Miss had won, it would have beaten Alabama for the third year in a row, an unheard of run. However, in just over a minute, Alabama managed to cut the deficit from 21 to seven off of a touchdown run and a punt return for a touchdown. It came out swinging in the second half, quickly taking the lead, and never looking back despite a late rally by Ole Miss to bring the game within five. This was one game for the ages, showing the poise and composure of two quarterbacks, one a freshman and the other an accomplished senior. Wins in those kind of games show why Alabama is the number one ranked team. It never allows pressure or fear to get the better of it. A number one team is one that can win no matter the circumstances, and that’s what Alabama has shown themselves to be.

Ohio State is the number two team in the current poll ranking. It’s played one game fewer than Alabama and Louisville because it had a bye week. But those wins have been as impressive as any others this season. Last week, Ohio State dominated Oklahoma, a team with Heisman candidate quarterback Baker Mayfield, and 45-24. The offense didn’t even have to do much because the defense held Oklahoma’s running game in check and intercepted Mayfield twice. That’s what one would call a complete game, with offense and defense working in tandem effectively. In its first game of the season, Ohio State soundly defeated Bowling Green State University 77-10. Now, perhaps, is too soon to call Ohio State a lock for a playoff spot. It will finish off its season with games against ranked Big 10 powerhouses Nebraska, Michigan, and Michigan State, in addition to currently undefeated Maryland. In a few weeks, it also has to play Wisconsin, a team that has already outperformed expectations with a win against LSU and a decisive victory against Michigan State. Sure, it’s a tough task, but then again, Ohio State has already demonstrated it can beat some pretty tough teams. It should be exciting to watch.

The Big 12 is a mess. That’s really the only way to put it. Oklahoma was supposed to be amazing this season, but it’s won one of its three games. Baylor is the only undefeated team in the conference, and that might not last long. These records are all indicators that the Big 12 will be excluded from the College Football Playoff for the second time in three years. Basically, some team needs to get its act together soon, or Big 12 fans are going to be disappointed come December.

Next week’s games to watch: Stanford vs. Washington, Texas vs. Oklahoma State, Tennessee vs. Georgia, and Louisville vs. Clemson.