News » Will New PPR Be Your New Perfect Place of Residence? 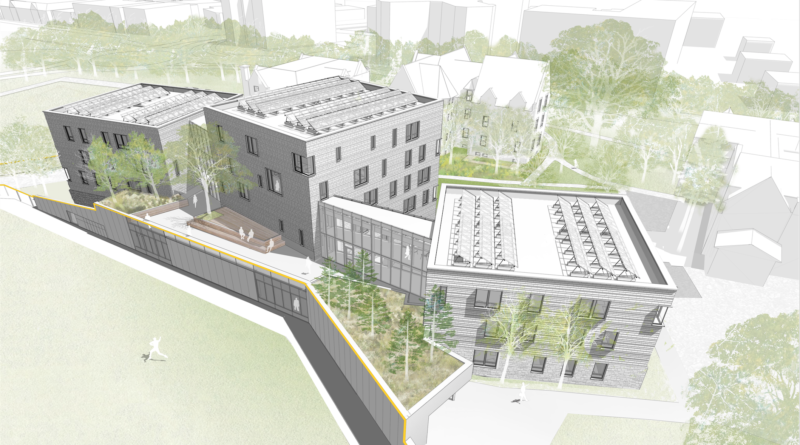 On Tuesday night, representatives from the DIGSAU architecture firm presented their plans for the new dorm being built between Palmer, Pittenger, and Roberts (PPR) and the baseball field.

The new dorm, currently called New PPR, or NPPR, will be made of up of three connected cube-shaped buildings. The dorm will consist of 21 suites with a total of 125 beds. Each suite will have five to six beds with a common living room, kitchen, and shared bathroom. However, there will also be two bi-level 11-bed suites. All rooms will be singles. Three of the suites will be fully accessible; all other suites will be accessible but will not meet the stringent requirements to be considered fully accessible. The dorm will also include a staff apartment and office that will house the Residential Community Coordinator (RCC) for PPR and NPPR. This apartment will be separated from student living spaces.

The design places more emphasis on making living rooms bigger rather than individual bedrooms because of input from students who said they preferred large common areas to large bedrooms. Bedrooms will be around 114 square feet. “The monastery was a bit of a model here,” said Jules Dingle, a principal at DIGSAU who gave the presentation on Tuesday.

The dorm should be open for Fall 2018. At this point, selection into the dorm will follow the same seniority-based lottery system as other campus housing. Rachel Head, Assistant Dean and Director for Student Engagement, explained that five to six person suites will likely be selected as blocks, while rooms in the 11-person suites may be selected individually. However, this is still up for discussion.

According to Susan Smythe, ADA Program Coordinator and project manager for NPPR, the college had another design for NPPR that was one large building. Swarthmore decided that they wanted something a little different and held a design competition to search for a better plan. DIGSAU won the competition. The firm had worked with the college before when they designed the Matchbox.

DIGSAU sought input from many sources in designing NPPR. Jules Dingle described how the design team considered issues of sustainability, impact on the baseball field, aesthetics, and the types of spaces students considered most important.

In terms of sustainability, the new dorm will have student garden plots, geothermal heating, solar heated hot water, and  rainwater harvesting from the roofs. This harvested rainwater will be stored in an underground tank and used to irrigate the baseball field. It will also be used as greywater to flush toilets. The buildings will be super insulated to reduce heating and cooling costs. Their roofs will have photovoltaic arrays, which will provide a portion of the energy to the buildings.

Because of the location of NPPR, the outfield fence of the baseball field had to be moved in 20 feet. DIGSAU wanted to make sure that this would not affect the level of play on the field and  increased the height of the section of the fence that had to be moved. This assures that the number of home runs stays relatively the same as before.

Dingle also emphasized that the firm wanted to “[find] a way to integrate athletic and student life.” NPPR will have a raised, multi-use terrace overlooking the baseball field in addition to views of the field from within the buildings’ lower level common areas. They hope that the proximity of the field and the dorm will also increase the number of spectators.

This project also included a redesign of the connection between Palmer and Pittenger and the removal of the old addition to Palmer. The removal of the addition has already been completed. Construction of the geothermal wells for NPPR was completed this summer. The steel frames of NPPR are going up now.