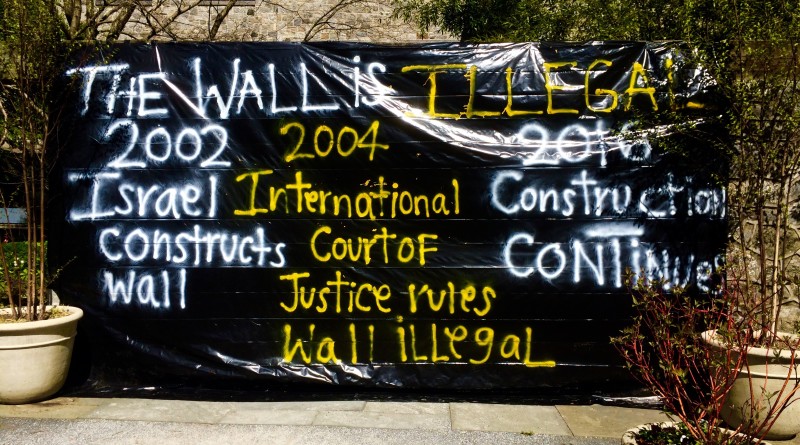 On April 18, in response to Israel’s recent imposing of more checkpoints and road closings, Swarthmore Students for Peace and Justice in Palestine (SPJP) set up an interactive display around Kohlberg to simulate checkpoints. There were a series of banners around Kohlberg with statements such as “Tear Down This Wall” and “Have you ever gone through a checkpoint on your way to class?” written on them.

SPJP does a project every year to raise awareness about salient issues concerning Israel and Palestine that they consider unreported in media.

The purpose of this year’s display was to raise awareness about the wall in Israel that prevents much Palestinian movement to work, schools, hospitals, and many other places. This wall serves as a barrier to the freedom of movement for Palestinians, according to SPJP. The Kohlberg display was intended to force students to think about the many ways in which people in the United States can exercise freedoms of movement and rights that are not available to many Palestinians.

Timothy Hirschel-Burns ’17 said that even though they were just posters people see on their way to class, he wanted students to consider, “if everyday [they] had to go through a checkpoint, face harassment, long delays and not even be guaranteed to go through, how that would impact [their] daily [lives].”

“We have the freedom of movement, freedom of rights, and a lot of people don’t. It’s easy to be blinded by that privilege and not think about it, and this is an interactive display that forces you to think about it,” said Aneesa Andrabi ’16.

While some students have greatly appreciated SPJP’s interactive display, Swarthmore Students for Israel President Sammy Greenwall ’18 thought that this movement was “incredibly counterproductive towards progressing a dialogue between pro-Israel and pro-Palestine students on campus.”

Greenwall also did not think this display had any effect on the average student, and stated that the display only “stratif[ies] the community more.”