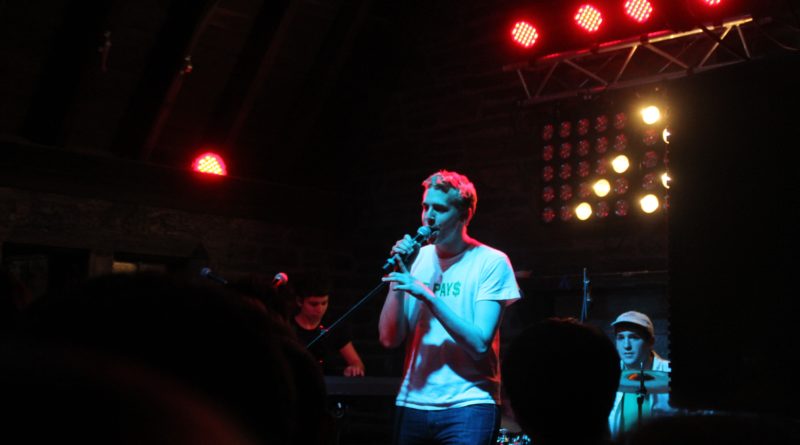 The story of the band’s creation can be traced back to when they were first-years.

“Dina and I were friends since freshman year, and Dina knew Noah who was a drummer. We’ve always wanted to start a band because we had similar tastes in music, and similar views on what kind of band we wanted to make here in Swarthmore. So it all came together,” said Oetting.

The name of their band came serendipitously as result of a sweet story.

“Blake was drinking ice tea that had the word ‘Calypso’ on it, and we wanted to put it in,” said Ginzburg.

“And we also wanted the word ‘baby’ in it, so it all made sense,” said Oetting.

“We added the exclamation point in it, too …  because we’re fun” added Ginzburg.

“Our music is kind of sarcastic, and angry, but not serious … sometimes we think we sound kind of circus-y,” said Ginzburg.

They each have different artists that heavily influence their own style. For Oetting it’s Pavement, whom he cites as an example of how he wants his intonation to sound. Ginzburg named Le Tigre as an influence, which is a synth-punk band.

“If you call the keyboard we have a synth, then that’s kind of what we are,” said Ginzburg.

They write their music together in an organic way, with Blake coming up with some of the lyrics and Dina and Noah adding musical counterparts.

“With our music we’re really saying to not be too serious,” said Ginzburg.

“Our music is really quite self-deprecating. We make fun of ourselves and our group of friends, mostly,” said Oetting. “But in an affectionate way.”

Calypso Baby! hilariously pokes fun at themselves and the Swarthmore community with song titles like “Liberal Arts Tool” and “Good Luck on Your Start Up.” They are also performing in Philadelphia on May 6th.