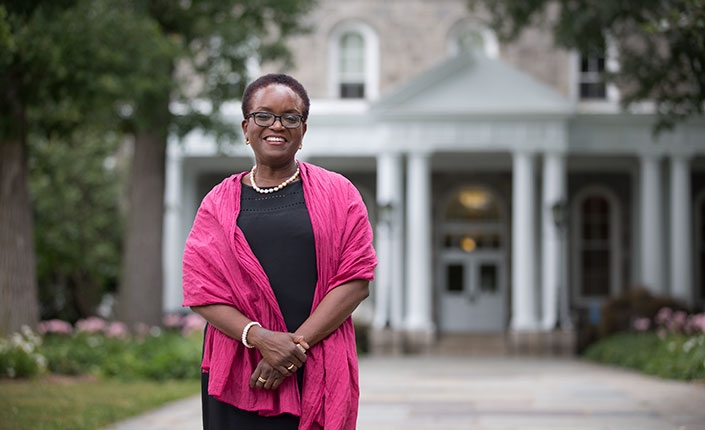 On Thursday, April 7, 2016, I sat in a room with President Valerie Smith to talk about her life, her opinions, and her plans for the future. Previously, The Daily Gazette had published a video interview with Smith. Over the past months, I reached out to students, faculty, and administrators from Swarthmore College and Princeton University, an effort which culminated in this interview.

It had just started to drizzle as I made my way to Parrish E236S. There was a student sleeping outside of the Admissions Office when I got to the top of the staircase, and I made sure not to wake him as I turned down the East Wing. I was early; sitting in Smith’s reception area, I glanced at the headlines on The Chronicle of Higher Education and The Swarthmorean. While I contemplated a container of pins bearing the sun-like logo still hanging in Sharples Dining Hall and the canary yellow walls, President Smith came out to greet me and led me into her office.

We sat at a small circular table next to the door and across the room from her desk. Though the blinds blocked the dismal weather outside, I could only imagine the view of Parrish Beach that this office afforded. To my right sat Vice President for Communications Nancy Nicely.

Nicely joked that I was doing similar interviews at the bookends of the year—after all, I had already participated in the DG video interview with Smith in October. I laughed and turned to face President Smith, beginning the conversation.

Smith began, “I was born and raised in Brooklyn, New York, and I think that that had a really profound impact on who I am.”

Both of her parents were educators, and she was the eldest of three children. Her father, W. Reeves Smith, taught biology at Long Island University, and her mother, Josephine Smith, taught in the public school system.

At the young age of 15, Smith enrolled in Bates College, a small liberal arts school similar to Swarthmore.

“One of the reasons I think my family thought Bates was a good place was because I was young and leaving home, and it was a very nurturing environment.”

As a junior, Smith spent time at Oxford University in England, her first time outside of the United States. She reflected on this “marvelous” experience and explained that it helped her develop a greater confidence in her ability to adapt to new situations. Additionally, Smith added with a smile, her excursion gave her a love of travel.

Smith then completed her graduate work at the University of Virginia.

In 1980, she began teaching at Princeton University. While in her first years at the school, Smith taught in the English and Afro-American Studies Programs.

“Princeton was a really important experience for me because it’s a Research I University with a real focus on the undergraduate, liberal arts, experience.”

Smith made headlines by leaving Princeton with three other faculty members in 1989. A New York Times article linked her and the others’ resignations to the university’s actions regarding English Literature Professor Thomas McFarland. McFarland had made sexual advances to a graduate student, but was only initially suspended for one year, prompting unease with the with the student body and faculty. He retired that fall, before classes resumed.

Moving to the University of California, Los Angeles, she primarily taught English, but also served in a variety of administrative positions. Among these were Chair of the Interdepartmental Program in African-American Studies and Co-Director of Cultural Studies in the African Diaspora Project.

Everyone who I reached out to had nothing but praise for Smith’s tenure at Princeton.

Princeton University Senior Ramie Fathy had a chance to work with Smith while she was the Dean of the College. While on the Undergraduate Student Government’s Academics Committee and Committee on the Course of Study, Fathy interacted with Smith frequently to address issues and policies important to the student body.

“Working with Dean Smith allowed me to feel, above all else, heard and respected, and I am fortunate to have met her and worked with her during my time at Princeton,” Fathy said in an email. “Dean Smith was a professional but approachable figure who was dedicated to maintaining and improving the Princeton experience for its community members.”

In response to a question about her accessibility, Fathy said, “Dean Smith maintained appointments open for students to meet with her each week, and a number of students took advantage of these opportunities to share their stories and issues.” He added that Smith attended numerous student events, including dinners for incoming freshmen.

“Dean Smith was not a distant administrator, but rather a member of the Princeton community who looked out for and served the students.”

I also talked with Swarthmore Presidential Fellow Bruce Easop, a Princeton alumnus who was hired in February. Though he would not say whether he came to Swarthmore specifically because of President Smith, he echoed Fathy’s sentiments. While Undergraduate Student President in 2012, Easop worked closely with Smith. In an interview, he explained that he was struck by her appreciation of different perspectives.

“When in conversation with her, whether we were in agreement or disagreeing, she would always take the time to listen carefully, to ask really thoughtful questions, and to try and understand where I was coming from,” he said.

While Smith was still Dean at Princeton, a Swarthmore search committee consisting of twelve students, board members, faculty, and alumni began to search for an individual to replace Rebecca Chopp, the college’s previous president. Based on early discussions, the committee wrote a position specification document which required that the 15th president possess a “personal commitment to the core values and traditions of Swarthmore College,” as well as a “keen intellect” and “lively sense of humor and wit,” among other qualifications.

Search Committee Chair Salem Shuchman ’84 explained in an email that the committee worked with a consultant to assist in finding qualified applicants. They also accepted suggestions from the campus community.

“There were a large number of candidates given the attractiveness of leading one of the premier liberal arts colleges in the country,” he wrote. “The committee then reviewed the list of candidates and proceeded to winnow down the list through a series of interviews.”

Finalists met with groups of students, faculty, and staff. The committee, after receiving feedback, reviewed each of the final candidates, and decided to recommend Smith to the Board of Managers.

“The Board of Managers then unanimously approved President Smith and the rest is history,” Shuchman added.

After Smith was hired, an Inauguration Steering Committee began to plan a ceremony. 14 individuals sat on the committee.

The Inauguration, held in early October 2015, had a theme of “Changing Lives; Changing the World,” and featured arts performances, a symposium, an honorary tree planting, and the inauguration itself. The official ceremony held on October 3 was attended by alumni, family and friends, and academics from all across the United States.

In the months after her inauguration, President Smith has been active in multiple ways on campus, including by starting a “Dinner with 12 Strangers” program which brings members of the campus community together for a meal at the Courtney Smith House. She has also attended events such as the recent Peace Walk and symposium for Psychology Professor Barry Schwartz.

Similarly to perceptions of her, Smith expressed a positive impression of the student body in our interview.

“I really enjoy working with such extraordinarily talented people who care so deeply about the community here, who have been really welcoming to me.”

She spoke highly of Swarthmore’s professors.

“I have really loved getting to know the faculty. They’re an extremely rare group of highly-regarded scholars, world-class scholars, who are, again, deeply committed to the teaching mission of the college, to mentoring students.”

“And the staff is so gifted and so committed to the core mission of the institution,” Smith added.

History Professor Allison Dorsey said in an email, “Though she has been at Swarthmore for a short time, I am very encouraged by Dr. Smith’s presidency. She arrived on campus interested in learning more about Swarthmore. She recognizes the best of Swarthmore’s traditions and encourages all of us to think deeply and embrace our best selves as part of the effort to enhance the institution.”

As for Smith’s interactions with the professors, Dorsey said, “She is genuinely interested in everyone on the campus: students, staff, and faculty. She greets everyone with a warm smile and radiates sincerity. The faculty is at ease in her presence and seems confident they can speak with her about real concerns.”

Smith has not kept out of campus politics, and joined the debate over fossil fuel divestment with an editorial in The Daily Gazette.

Additionally, she suggested in an earlier email exchange, “We need to create and encourage more opportunities to relax, play, unwind and take advantage of health and wellness programming that is available to them.” This was in response to the record proportions of students who have used the campus’ mental health services last semester.

Near the end of our interview, I asked President Smith how she sees Swarthmore when the incoming freshman class graduates in 2020.

“I see it as a place where we will breathe new life into the experiential and extracurricular side of campus even as we maintain academic rigor,” she said.

“I’m also hoping that we will see the benefit of some of the great work that has been taking place, that has begun to take place, on campus around improving campus climate,” Smith said. “We have opportunities to ensure that we provide an even more welcoming environment for people where, whatever their backgrounds, experiences, and values, they feel that they are being valued and respected.”

In previous exchanges, Smith displayed a similar concern. In response to on-campus incidents, such as the defacing of photographs of students of color in the French Department, and reactions to off-campus protests such as those at the University of Missouri, President Smith wrote, “We are all products of complex social histories and relationships, and we bring those histories with us to campus. If we are honest with ourselves, we see on our campuses evidence of the injustices and inequality that divide us in the larger society.”

She wrote, “It is our responsibility to create more equitable environments on our campus, and to empower students, faculty and staff to speak out against injustice and to learn to work in coalition with others to bring about social change—whether in their immediate environment or in the larger world.”

After we finished the interview, I gathered my papers and thanked President Smith for her time. She wished me luck, and I said goodbye to her and Vice President Nicely. The student was no longer sleeping next to the Admissions Office, and I couldn’t help but smile as I walked down the stairs.