Arts & Features » Ain’t No Holla Back Girl Is Back 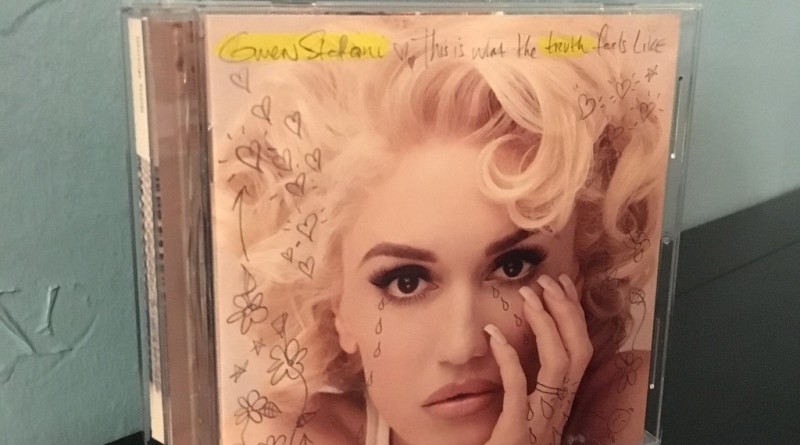 When I picked up Gwen Stefani’s newest album, This Is What the Truth Feels Like, I wasn’t exactly sure about what I was expecting. I had already been streaming her three singles from the album (“Misery,” “Make Me Like You,” and “Used To Love You”) over and over again on Spotify but even these very much loved tunes didn’t offer anything new or substantial. They were, as Stefani has always offered for Top 40 radio, very generic, pop hits. It’s a great album for those like me who still hold onto a nostalgia for the sounds of 2000s pop. For those looking for anything else, the album undoubtedly falls flat.

Even before sitting down and listening to any of the tracks on This Is What the Truth Feels Like, it’s difficult not to think about 2000s pop. The album cover features a headshot of Gwen Stefani with hearts, stars, flowers, and even tears drawn in pencil as well as bright, yellow highlights over the words “Gwen Stefani” and “truth.” These qualities immediately draw me back to my middle school years, when copious amounts of drawings like these could always be found running down the side of my notebook and agenda. The album’s interior artwork further draws on this concept by including pages upon pages of lyrics written in pen, colored pencil, and marker, etc. all on loose leaves of paper. The use of index cards, graph papers, and coffee mug stains works to remind us of late nights spent finishing up our dreaded math homework. Some of Stefani’s photographic portraits continue to display red marker streaks and stars, much too similar to a middle school student’s yearbook.

In case you haven’t gotten the idea yet, much of the album’s music revolves around the sort of young love that many of us first experience in our preadolescent years.

“Misery” starts off the album, with lines such as “You’re like drugs to me, I’m sooo into you totally,” and “Put me out of my misery, hurry up come see me.” If you can put the melodramatic hyperbole aside, you start off an experience of addictive, maddening love that is actually quite catchy. This same idea of addictive, devoted love is also strongly expressed in “You’re My Favorite,” “Make Me Like You,” “Used To Love You,” and “Send Me A Picture.” Stefani gets a little more experimental with her tracks, “Red Flag,” “Asking 4 It” (featuring Fetty Wap), and “Rocket Ship” which use beats that still very much sound like pop, but not as much as the other tracks.

While there are definitely some singles that are worthy of being overplayed on radio’s Top 40 stations, much of the album’s songs sound too much alike. Unfortunately, I’m reminded of her 2006 album The Sweet Escape which, too, offered promising singles that I still play today but along with that, a whole list of other forgettable tracks. For fans of Gwen Stefani and 2000s pop, I would definitely check out the mentioned singles but for everyone else, This Is What the Truth Feels Like truthfully feels much too boring.