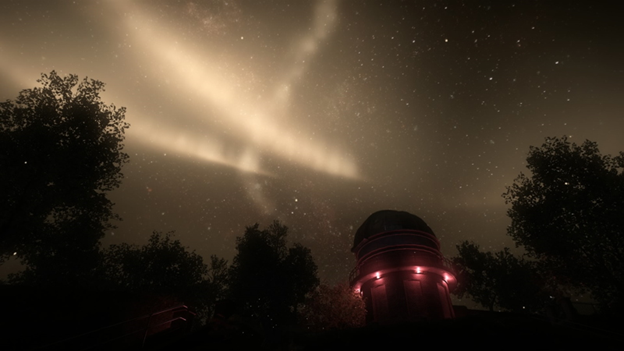 Little Moments of Humanity: Dan Pinchbeck on Everybody’s Gone to the Rapture

When The Chinese Room’s Everybody’s Gone to the Rapture begins, the world is already over, everyone is already gone. But to Dan Pinchbeck, the video game’s creative director, “[it’s okay] if the world ends because what was achieved before the world ends mattered.” This isn’t meant as apathetic, and I believe him when he says this is a hopeful outlook. Pinchbeck, who spoke with The Daily Gazette via Skype interview, thinks Rapture is “dark” but it doesn’t have a “bleak message.”

“[T]he point of Rapture is saying that we’re pretty amazing, but often it’s in the small stuff that we can take for granted that we are amazing,” Pinchbeck said.

At a high level Rapture is about the end of days, but it is far more concerned with what Pinchbeck calls “the little moments of humanity.” It uses the end of the world more as set dressing to address issues of love, marriage, infidelity, faith, and more in some brilliant ways.

“I think if you’re going to make a game about the end of the world […] you can either go the prosaic way where it’s all about nuclear ash and post-apocalyptic shotguns at the door. Or if you’re gonna talk about it in the terms of this is the end of the existence of life as we know it…you’re not gonna be able to skirt around the kind of metaphysical and spiritual kind of questions…And you kind of owe it to your players to take them seriously,” Pinchbeck said of The Chinese Room’s approach.

The player in Rapture is less of a character or agent and more of a presence, floating through the small English town the story is set in. The game is structured in vignettes, focusing on the different residents of the town. Their stories are represented as projections, which appear as collections of light particles, of events from before the end. As a player, the goal is not to save the world, but rather to bear witness to the lives of people long gone. Rapture is not a power fantasy; it is not full of combat and heroic save-the-day moments.

“It’s full of quiet little moments of heroism. The sort of little acts that we kind of go ‘these are quite trivial’ but actually they’re really brave. There’s something really powerful about that,” Pinchbeck said.

He talked about one scene early on where Jeremy, a local priest, finds Amanda, whose children have just died. “He [Jeremy] holds her hand and it’s just that little thing, that little moment of human contact where you go ‘that’s a really special moment of one human comforting another.’” Moments like these are what make Rapture a uniquely emotionally experience.

During my time talking with Pinchbeck, he showed a philosophy of approaching game design and writing with characters as the most important element.

The characters in Rapture are normal people in extraordinary situations, whose lives and problems so many of us can relate to. Stephen and Kate’s marriage is falling apart as he cheats on her. Rhys and Rachel are teenagers experiencing their first love. Wendy is old and alone. Jeremy is struggling to believe in God. Pinchbeck and the rest of The Chinese Room were committed to making this game about the end of the world deeply personal. In one powerful scene Stephen is alone after everyone else has gone. He tells a story of how, when he was young, his family took in a sick fox. One day, Stephen was playing with the fox and it bit him, so the family put it down.

“It’s that kind of thing where one death is a tragedy and a million deaths is a statistic, where you can’t quite get your head around the scale of what’s going on with it. And like a lot of the stuff in Rapture, what we tried to do is to bring that back down to a really personal level…if you go ‘this is like the time when we found a dying animal,’ that’s something we can understand and it places that kind of tragedy in a very, very small, kind of human level. And also it shows a softness to Stephen and you just go ‘Oh no…’ and you really feel for him in that moment,” Pinchbeck said.

Pinchbeck and the other developers at The Chinese Room tried to reflect this personal level in the gameplay of Rapture. There are no quest markers, no inventory, no HUD, no environmental puzzles. Pinchbeck grouped those elements together as goal-based gameplay.

“When you have goal-based gameplay then you’re in a mental mode where you’re looking for a solution to a problem and everything kind of gets wrapped into being a potential resource to solve that problem,” Pinchbeck said.

He described how this was something they wanted to completely avoid in Rapture.

“[Y]ou just don’t get as good characters or emotion writing in [goal-based gameplay]. Characters just become ciphers for solutions or exposition,” he said.

He discussed how, when overcoming a design puzzle or goal is the main objective, then players are more likely to treat the characters and world as “a resource to be mined,” and approach scenarios thinking “what am I gonna get out of this.”

“Given [Rapture] was about story and it really stands or falls on story we had to not be writing a story that was just a solution to a design problem. It had to be something which was about saying this is this world that has to feel real and compelling and you have to care about these people,” he said.

Pinchbeck has a deep appreciation for the emotional power games can have.

“I don’t want to try and mangle a film into game form. It’s the stuff which you go ‘you could only do this with a game, this is only a story which could be told with a game,’ that’s the kind of interesting stuff for me,” Pinchbeck said of the development process behind Rapture and The Chinese Room’s previous game, Dear Esther.

This is illustrated in the non-linearity of Rapture, the way the player can drift in and out of different vignettes at any given time, experiencing people’s lives in seemingly random orders. Pinchbeck talked about how two players can have totally different views and interpretations of a game depending on which parts they experience.

“[S]ay you think Stephen is an asshole, unless you happen to have found this one scene, where if you found that one scene, it just casts the way he behaves in a different light and then it completely reinvents the game. But a different player who didn’t find that scene would think of Stephen in a totally different way. And that’s just really, really exciting. Again, it’s something that’s pure games, only a game could do that. You couldn’t do it with anything else,” Pinchbeck said.

Playing Everybody’s Gone to the Rapture was a gaming experience I won’t soon forget. Pinchbeck articulated his views on the meaning of Rapture:

“The central thing we were going for was that contact with other humans is what makes life meaningful and worthwhile and a life lived alone is half a life. […] It doesn’t matter that people die because they lived,” Pinchbeck said. People’s lives matter.

“[Y]ou live on in the memories of the people that you love and the impacts you have on their lives, and really […] the thing is none of it matters if there’s not someone to share it with in some way shape or form. And that sharing is what makes us properly human,” Pinchbeck said at the end of the interview.

Everybody’s Gone to the Rapture is available to download on PS4.

Hi there! My name is Kyle McKenney! I’m a part-time games journalist, YouTuber, and sophomore here! If you enjoyed this interview, follow me on Twitter, @TotallyKyle95, and check out my YouTube Channel, Games With Friends, where I called Everybody’s Gone to the Rapture one of my Top 5 Games of 2015!

“Please tell me you’re not writing a review on ‘Squid Game.’” So said my colleague at The Phoenix when I