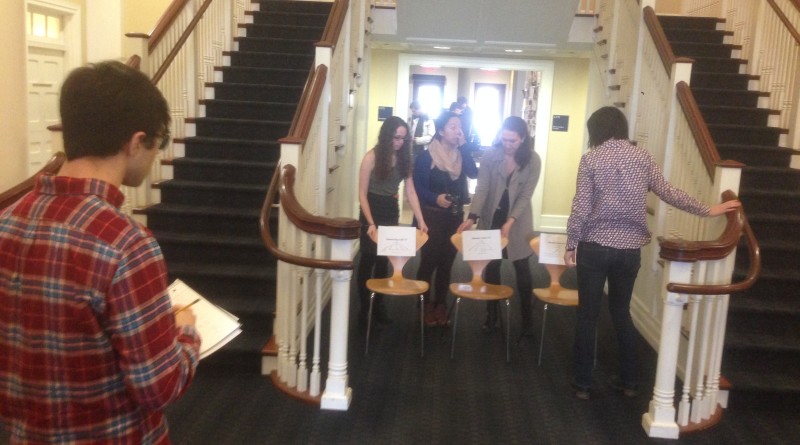 On Wednesday, at 12:15 p.m., pro-divestment group Mountain Justice (MJ) announced a new ultimatum to the board of managers: three specific board members must refrain from participating in the board’s decision-making on divestment, or MJ will intensify its campaign.

The board members in question are Rhonda Cohen ‘76, who is on the board of directors of a trust fund that invests heavily in fossil fuels, Harold Kalkstein ‘78, who founded a consulting group retained by some energy companies; and Samuel Hayes III ‘57, who sits on the board of managers of Eton Vance Investment Managers, which invests in fossil-fuel companies. All three, MJ says, have financial ties to fossil-fuel companies that would compromise their impartiality in deciding whether or not Swarthmore should divest its endowment from fossil fuels.

“They have a conflict of interest,” MJ member Sophia Zaia ‘18 said.

Hayes, one of the three managers named, said the issue was closed.

“The board has made a decision not to make divestment and not to revisit the issue, so there’s nothing more to say,” Hayes said.

Still, MJ has made the demand a central part of their campaign this semester. If, on February 20th, the board members recuse themselves from participating in divestment discussion, the group will not escalate their campaign, member May Dong ‘18 said. She later clarified by email that this did not mean the group would not escalate its campaign in general, just that it would not escalate in connection with the board members’ connections to the fossil-fuel industry.

The group presented its ultimatum on the steps of Parrish’s main stairs, where it usually makes such announcements. As it often does, MJ augmented the press conference with theatrical props: members brought out three chairs, each labeled with the name of one of the three board members. The chairs symbolized the group’s desire for these board members to “sit out” of future conversations on divestment, Abby Saul ‘19 explained.

Shortly before the announcement, MJ members put the three chairs, taken from nearby Shane Lounge, between the two staircases. MJ members and interested parties, about two dozen people in total, started gathering around; in attendance was The Swarthmore Phoenix reporter Joe Mariani ‘19. When asked if he thought the press conference would be significant, he said, “I guess it depends on what they say. If they want to restart the sit-in or do something else, it’ll be another big deal.”

About a minute before the press conference began, Professor Lee Smithey walked into the building. Smithey is a regular at MJ’s events; last December, he and his daughter sang along with MJ’s protest chants outside a board meeting.

“I see this as one more step in helping us perceive […] how [the college is] involved in climate change,” Smithey said regarding MJ identifying board members with a conflict of interest.

Soon, MJ member Rachel Pomerantz ‘19 ascended the staircase on the right. “Hey everybody,” she said, and a short speech followed. Two other members of the group spoke after her, Shana Herman ‘19 and Abby Saul ‘19. Each of the three speakers explained how the three managers were connected to the fossil fuel industry and reiterated their call to divest.

“If you don’t make that choice [to recuse themselves], we will have no choice but to engage in further escalatory action. The world is watching,” Saul said.

UPDATE (11:11 p.m., January 27): In response to the action, Board of Managers Chair Tom Spock ’78 provided The Daily Gazette with the following statement: “Everyone on the Board cares deeply about the threat of climate change. The only interest each of our Managers has is in putting the College first – unconditionally. I invite Mountain Justice to join the constructive efforts underway on campus to effect change, starting with the carbon charge proposal.” A carbon charge would involve internally taxing the college’s carbon emissions to encourage reductions.

UPDATE 2 (6:40 p.m., January 28): Mountain Justice’s Sophia Zaia ’18 responded to Spock’s comment with the following: “The urgency of the climate crisis requires a response at the same scale. While MJ is always excited to hear about on-campus initiatives such as the carbon tax proposal which the faculty have worked hard to develop, we must also divest to directly challenge the fossil fuel industry. […] It is clear that conflicts of interest on behalf of Board members Cohen, Kalkstein and Hayes are compromising the Board’s decision on divestment. Swarthmore will either divest now and show itself as a champion of social justice, or will risk both social stigmatization and damages to the endowment caused by the carbon bubble.” The carbon bubble refers to the idea that fossil-fuel companies will devalue due to their environmental impact.

CLARIFICATION (6:40 p.m., January 28): The article originally reported that May Dong ’18 said that MJ would not escalate its campaign if the three board members recused themselves. She later clarified by e-mail that this only meant the organization would not intensify its campaign around this issue specifically, not that there would be no escalation in general. This clarification has been added to the body of the article.

One thought on “Mountain Justice: Three Board Members Must Leave Divestment Conversation”