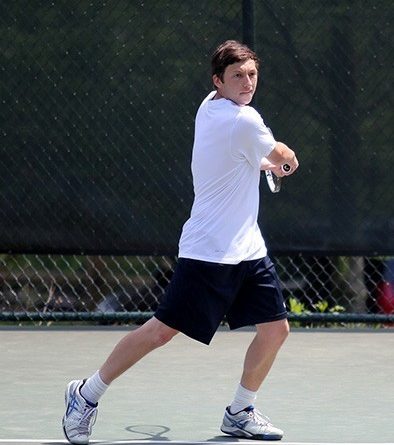 Through immense effort and dedication at practice this season, the men’s tennis team has proven that they are dedicated players with a propensity for success. The team’s most recent competition took place at the ITA Southeast Regional Tournament where they established themselves as formidable on the court. This tournament pinpointed areas of their performance that can be improved, and formulated their hopes and goals for the team moving forward.

During the first week of October, the men packed up their bags and headed to Fredericksburg, Virginia, where they competed against players from a number of top schools including #12 Johns Hopkins. The team brought three freshmen to the competition, all of whom stepped up to the plate to play doubles in the A flight, which is the highest ranked division of the tournament. While the doubles matches highlighted an area of play where the men can certainly improve, their singles performance proved that, in the words of Mark Fallati ’18, “The entire team is not just nationally competitive but is ready to beat anyone in D3.”

The ITA tournament consists of three rounds of matches between 64 individual players. This means that the “round of 64” is the first round where no competitors have been eliminated yet. The “round of 32” is the second round, and the “round of 16” is the final round with only sixteen players left standing. This year, John Larkin ’17 and Fallati advanced to the round of 16, making the 2015 ITAs the first time that Swarthmore has advanced any singles player so far since 2009.

Although the team only took home one win out of its three doubles matches, Larkin didn’t think it was a bad sign.

“Only one out of our three doubles teams won a match,” Larkin said. “This may seem like an indication of rough doubles teams, but I think it was due to just getting back into the match level of things.” Practicing is always different than competing, and Larkin thinks that while he and his teammates have certainly contributed quality time and effort at practice, it is an understandable challenge to shift from practice level play to match level play.

Apart from doubles, the team members met some welcome challenges in singles, with a few draws in terms of competitors. Ari Cepelewicz ’18 took on the number one seeded Johns Hopkins player. Although Cepelewicz lost this match, the team views it as more of an unlucky draw than a faulty performance on Cepelewicz’s part. Similarly, Josh Powell ’18 competed against a Washington and Lee player who was seeded number four and ultimately fell to him as well.

Fallati explained that, “Playing two of the top four guys in the first round is really bad luck,” so the team didn’t take these singles losses too harshly.

Before falling to a challenging Carnegie Mellon player in the round of 32, Simon Vernier ’19 competed against and defeated who Head Coach Mike Mullan referred to as an “experienced” Johns Hopkins player. This performance indicated that Vernier ’19 will be a challenge to opposition in springtime matches.

The highlights of singles play were both Larkin’s and Fallati’s performances as they both reached the round of 16 in the championship draw for singles. Fallati ’18 faced Abhishek Alla, a Carnegie Mellon player who was seeded both as the number two ITA tournament player and as the seventh player in the country for singles. Fallati gave Alla a fierce challenge when he won the second set in a tiebreak 6-7, then barely lost the third, 7-5.  Fallati was the only player to rattle Alla, who ultimately went on to win the entire ITA tournament.

Although their singles play was strong throughout the tournament, Michael Song ’18 voiced what seemed to be the consensus of the entire team when he said, “I feel that our weakness is still doubles as it has been before but of course there is still the entire winter off-season to improve. Going against top teams it is not enough to just have a strong singles lineup. Getting points from our doubles is key in these crucial and tight matches.” While improving the doubles lineup presents a challenge, it is a goal that can certainly be achieved.

In addition to undeniably positive team chemistry amongst team members, the team is motivated and eager to perform well this spring. Larkin believes that if the team adds a little extra punch to their play, they will go far.

“We just need to want the ball and have that extra fight to push through and cause a really big break,” he said. “We need to take practice seriously and make the most out of what precious time we really have at Swat.”

Mullan believes that the winter will provide the team with sufficient time to train for the spring season, which will open with indoor matches in February against Stevens Tech and NYU. Over spring break, the team will travel to Walla Walla, Washington for the Whitman Invitational. This trip will give the team the opportunity to compete against Portland State and Seattle University. In terms of goals for the spring season, Head Coach Mullan said, “Our out-of-conference schedule is pretty tough and we hope to pull off a few wins over teams ranked in Division III; in conference, we would like to be in position once again to play for the conference team title.”

In the meantime, the men will focus on practice and will work hard to achieve their immediate goal of improving their doubles lineup. Like any solid competitor, the team has spent time identifying definite goals and will now begin to dedicate the time and effort needed in order to achieve them. The men look forward to the spring when they begin at-home competition and travel to away games in the hopes of bringing back victories.