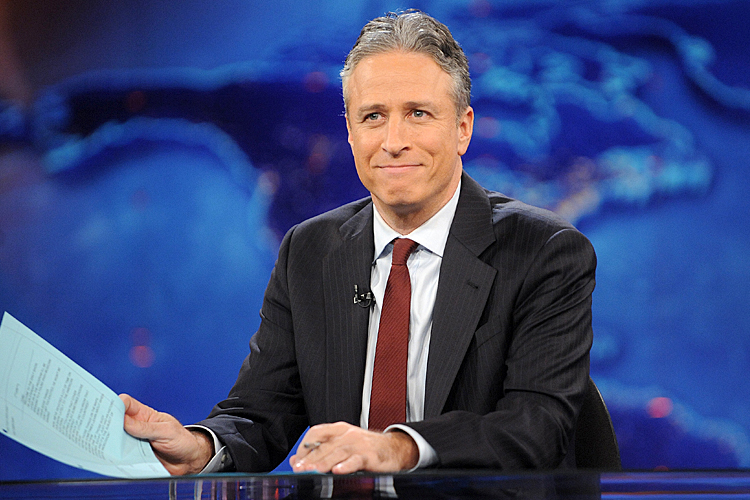 Returning to the United States after living abroad for more than a decade, I have become increasingly disenchanted with our parochial politics. We spit and bite and insult each other in our desperate attempts at discourse; our democracy hangs by threads as we tear apart our fellow citizens, either in attempts to protect ourselves from implied threats or to unintentionally show the stupidity of our outdated ideologies. My knowledge of history only deepens the distress I feel whenever I watch or read the news, reminding me that such political chaos is as integral to American life as shopping in a mall or attending a baseball game. Sometimes I desperately want to disconnect from the insanity of public life.

Perhaps then it was paradoxical that a ritual of mine was watching The Daily Show With Jon Stewart in an attempt to get respite from nonsense by making fun of said nonsense. That ritual came to an end, or at least completed a phase. Stewart’s last episode aired on August 6, 2015. He will no longer grace my television/computer screen with his smile-inducing grandiose entrance; he will no longer exclaim in a breathless burst of air, “WelcometotheDailyShowmynameisJonStewart!” while furiously scribbling gibberish on a blue sheet of paper.

According to a reverential article in The Atlantic by David Sims, “If 2015 really is the end of Stewart’s late-night career, it’s as strong an ending as any player in TV history could ask for”. Though the piece was published months before Stewart’s final show, it expresses the strong sentiments that many, myself included, have just come to realize for the cherished comedian. In the coming months we shall see  what direction Stewart’s successor — a young South African named Trevor Noah — steers the show in a new direction. Stewart himself will likely be remembered in the years to come —  especially if he is transitioning to a new spotlight, as is often the case in television.

But Stewart’s best-known job conjures up a simple thought: it was funny. That’s how I described The Daily Show With Jon Stewart to friends and myself, but it also describes the puzzling situation of being a citizen of this republic. The United States is not a faceless polity but a collection of fifty countries, each with their own brand of provincialism that connects to others to create a generally agreed upon provincialism. How do we start to unravel such a complex nation? Jon Stewart and his unfettered sarcasm showed how humor can be a blunt but effective educator, that preceding discussion with comedy facilitates effective learning. The only royals we Americans truly believe in are the ones who are photogenic on a television screen. And Stewart was truly the exceptional king at getting us to listen without commanding us to listen.

Stewart’s disarrayed start gives pause to how such a funny man entered into showbiz, and indeed into public consciousness. After graduating from The College of William & Mary with a psychology degree, John Stuart Leibowitz worked as a contingency planner, contract administrator, puppeteer for children with disabilities, a soccer coach, a caterer, a busboy, a shelf stocker, and a bartender. After his merry-go-round of job hunting, Stewart finally decided to try comedy, having been known for his ‘funny man’ image in school. He went back to his birthplace of New York (although he was raised in nearby New Jersey) and in a year pulled himself onstage, simplified his name to the snappy Jon Stewart, and began concocting jokes.

Stewart began his tenure at Comedy Central with the second impeachment of a sitting U.S president and a contentious presidential election in 2000. That’s a strong note to start on, and Stewart played the Comedy Central band on forte-forte from then on. The presidency of George W. Bush, overflowing with political and social fumbles, provided a bonanza of material for any satirist to make himself a household name. Stewart then became a noteworthy comedian in his own right, parodying the crazy and confused state we found ourselves in at the turn of the century. He became the standard-bearer of news comedy, a genre he helped bring into mainstream television. Stewart illuminated the sillier and shameful aspects of American life: our insistence on freedom, our bombastic attitudes, our obsession with guns, our crumbling justice system, our silly politicians, our love of excess (in all things from food to finance), our history of hypocrisy and coming up short again and again and again.

It has been uplifting to reflect upon Stewart’s time as a television comedian, mocking the news with all its defects. Video clips from his entire profession can be found on most websites; YouTube is abundant with some of his best jabs and pokes. There was the time when he mocked Egyptian ex-president Mohammad Morsi for issuing a warrant for Bassem Youssef (sometimes called Egypt’s Jon Stewart) for making fun of said president, the time when he imagined a war between Florida and Texas that involved militarized alligators and meth addicts to decide which state was more messed up, the time when he railed against Donald Trump for daring to eat New York pizza with a fork and knife for no other reason than because it was weird!  The tangents he took on issues went far beyond their original scope, yet they never failed to bring us back to the head-banging problems that raised them.

For many he was also an unlikely guide in the disoriented world that we woke up to in 2001. Despite claiming that his show was nothing but comedy, Stewart unexpectedly became one of the most trustworthy news anchors for millennials and many others. The news has always been shrouded in suspicion, befuddling for viewers and reporters alike. Who do you trust? How do you get reliable information, and more importantly, how do you present it? Stewart answered these questions by adopting a news format while simultaneously unraveling how the news operates, highlighting its negligence with comic glee. He substituted pessimism with optimism; not the optimism of a better tomorrow but the optimism that today is hilarious and ought to be laughed at. If an optimist sees the opportunity in every failure, then Stewart was certainly an optimist for seizing every opportunity in our news to make fun of their failures.

David Remnick, for The New Yorker, discussed in an article entitled “Exit, Stage Left” the liberal legacy of Jon Stewart and what could succeed him. After all, Stewart has been unabashedly liberal and has only increased his staunch liberalism, having made no effort to hide his beliefs as he sat in front of a camera four nights a week for years. But Stewart was less a liberal than he was, as Remnick puts it, “anti-bullshit”. He didn’t take nonsense from anyone about important issues, especially his guests whom he invited on the show and sometimes crudely questioned, sometimes subtly interrogated.

He was not free of bias, in however small an amount. FOX News was a constant target of Stewart’s derision, having frequently mocked it as the blow-horn of the Republican Party than a serious news source. It still might be said: how could this arrogant New Yorker, high up in his steel studded skyscraper, point a finger and say these harsh accusations to people he knew nothing about? The criticism of Stewart is as high as the praise. Still the man continued to choose targets from both sides of the political aisle, attempting to even out his funny criticism, either to placate the people — or more likely to point out the pungent bullshit we are missing from even those we support.

Of course he’s hardly unique in this regard as comedic news-folk have multiplied in recent years, in no small part due to Stewart’s popularity. Stephen Colbert praised a visibly embarrassed Stewart on the comedian’s importance to him as a burgeoning talent. Satirists across the pond like John Oliver have drawn upon Stewart’s conduct as both an inspiration and a template. Stewart’s bombastic, expletive, crude, inane, belly aching comedy ingested nonsense and erupted laughter.

The appreciation for Stewart grew even more when the vaudeville act dropped, when he opened up with honest feelings about a tragedy, which is easily the rarest thing many have seen on television, myself included. After 9/11, he opened his show without that hurried sense of urgency instead opting for sorrowful reflection, fighting to hold back tears:

“The view from my apartment was the World Trade Center. And now it’s gone. And they attacked it, this symbol of American ingenuity and strength and labor and imagination and commerce, and it is gone. But you know what the view is now? The Statue of Liberty…You can’t beat that.”

Stewart met successive tragedies with more genuine emotion than most of our stiff-necked teleprompter scanning politicians would care to give. We must proceed with caution however, for the person on camera and the person in life often exist separately. In Stewart, a man who is generally considered one of the most trustworthy characters on TV, we find both a clever comedian who understands that comedy cannot always express heartfelt sentiments; it can only smooth them over after the shock has passed.

On August 5, a day before Stewart’s last program, the Newseum — an organization based in Washington D.C. dedicated to cataloguing events that exemplify the freedoms we prize so highly — announced they would try to obtain Stewart’s fake news desk to add to their collection, citing it as “part of America’s cultural and media history”. It seems that King Stewart’s satire will live on even though the show has now come to a close.

Jon Stewart took over The Daily Show a few years after I began my life not only as an American citizen but also as a human being. I was born in 1996 and he took over from Craig Kilborn, the original host, in 1999. He has lampooned American politics for nearly as long as I have been an American citizen. For the last few years I have often tuned into his show to elicit a laugh or two, but there was a deeper meaning in his relevant form of comedy. Underneath the guise of rambunctious satire was the dedication to holding people accountable, of searching for that mysterious concept of truth in our muddy media. Whether or not this will be a legacy that will last, Jon Stewart broadcasted the idiosyncrasies of American culture and examined them with a critical gaze that not only charmed, but questioned the issues that the television, or nowadays laptops, glossed over.

Now the king has abdicated and will soon be succeeded by, hopefully, a worthy successor. The reign has ended, something new will inexorably begin, and the television will keep running so long as electricity will power it and viewers will watch it. I will simply continue to flip between channels, trying to find someone who keeps poking the provincialism of this two hundred year old republic. I’m sure I won’t have to flip far.