News » Around Campus » Tale of administrative bloat does not match up 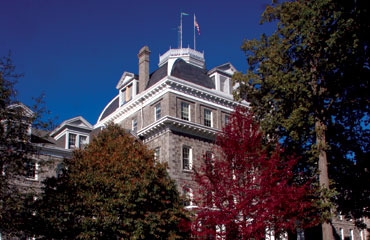 As undergraduate tuition costs continue to rise and adjunct professors represent a larger portion of college faculties, talk of a problem called “administrative bloat” is increasingly common on college and university campuses across the country. In The Fall of the Faculty, Johns Hopkins Political Science professor Benjamin Ginsberg makes one version of this argument that has become particularly popular. For Ginsberg, the professionalization of college and university administration has led to a massive increase in unnecessary and overbearing positions. This growth, or “bloat,” fuels the bulk of price increase as well as a slew of other problems of a meddling bureaucracy, including an increase in the use of adjunct professors.

But how does this narrative match up with the experience of faculty and students at Swarthmore in particular? The undergraduate experience varies so much across the landscape of U.S. higher education that it seems important to bring these larger narratives under scrutiny in discussing one particular facet of the wider system.

After reading Fall of the Faculty last semester, Philosophy Professor Baumann was concerned with how these wider trends have played out at Swarthmore. So he contacted Eileen Petula, the associate Vice President for Finance and the Treasury. Petula sat down with Baumann and went through recent staff and faculty hires.

When Baumann was given access to these and other numbers, he was surprised. “The over all staff growth was not as big as I expected it to be,” said Baumann. But besides the overall size, Baumann was surprised that many of the specific areas where growth had occurred were, in his eyes, fairly justifiable. Growth in the Dean’s and Provost’s office has been driven by spending increases in CAPS and the Health Center, IT staff, and academic support staff. Baumann opposes what he sees as “useless” increases in administrative spending, but many of these specific areas seemed to him like worthwhile or necessary investments.

Chair of the History Department Professor Timothy Burke, who has been a public (and skeptical) voice in the discussion of administrative bloat here at Swarthmore, sees the problem of specific cuts as less surprising.

“Everybody believes that there’s waste in budgets, but when you start looking it’s often pretty hard to find,” he said.

Despite the challenge posed by the details of the hiring process, Baumann is not ready to give up talking about the budget. As the student body continues to swell, Baumann’s primary concerns about the budget rest on whether administrative spending keeps the college from opening up enough new tenure track lines.

The college expects the student body to grow by around 200 students by the 2020-2021 academic year. At the same time, the faculty will be working through the transition to from a 3-2  course-load each year to a 2-2 course-load. These movements will create increasing enrollment and coverage pressures on academic departments.

In an email, Vice President for Finance and Administration Greg Brown addressed this issue: “The current ratio of students to faculty is 8:1. With the growth of the student body we will be maintaining that ratio and providing staff to support faculty and student needs. An increase in the faculty will not only allow us to retain our student/faculty ratio but also provide more flexibility and diversity in the curriculum.” The College plans to add 25-30 faculty lines to cover this growth. According to Baumann, 25 of these will be consumed by enrollment increases alone, leaving zero to five positions to address the switch to 2-2.

Baumann does not believe this is sufficient growth. He thinks that the dearth of tenure lines will widen curricular gaps and that the college will miss opportunities to strengthen valuable academic programs.  For Baumann, in the medium to long term, these problems represent a danger of steady decline in excellence. “We risk in the long run to go down small step by small step until we wake up one morning in 2025 or 2035 and say ‘Hey, turns out we are among the top 75 liberal arts colleges in the country. I thought we were the top 5,’” he said. “This is my main worry about Swarthmore. It’s easy to slide down. You don’t notice it from year to year.” Baumann wants 15 to 20 additional tenure positions on top of the 25 to 30 that the College has already committed to.

Calling himself a “dissenter at the margins of the faculty,” Burke expressed less concern about faculty spending to cover curriculum gaps. While he thinks faculty growth must at the very least match the pace of student growth and could grow faster, Burke does not think that enrollment pressures and curricular gaps are the central problems for the faculty in coming years. Burke admitted that there are are very pressing needs in certain departments for more professors, or wider coverage. More pressing, though, is the need for faculty to create some consensus about academic values and about what Liberal Arts means.

“The only way you avoid the trap of chasing being a shitty little university and walk into the space of being a great college is to understand from the beginning that conversations about the growth of the faculty should never be about areas we don’t cover in that simple sense,” said Burke, “We have to come to a recognition that you can learn in a liberal arts way from anybody, in any field, from any course. That that’s what every course here and every person should offer to you — the capacity to learn into a larger space of critical thought and practice, to learn towards other subjects, other disciplines, other ways of being.” Burke cited the Computer Science Department as particularly effective towards this interdisciplinary goal. In his eyes, the CS department encourages students to use cognitive methods learned in CS classes towards other problems and other disciplines.

As of today, argued Burke, the important questions to ask about a faculty-administration balance are different here at Swarthmore than at many other schools in the country that perhaps have experienced something more similar to Ginsberg’s narrative in Fall of The Faculty. Namely, Burke believes that Swarthmore’s problem is not about dollars and cents.  We have not reached a point where the sheer excess and financial sink of administration is an impediment to high quality learning and scholarship. Instead, Burke said, the issue is about decision-making, or what he called “the character of the working relationship between administrators and faculty.”

“People at large research universities really are dealing with what I would call bloat. They have very large, very expansive administrations. But they’re also dealing with another thing that’s different about us. In many cases, their faculties have lost governance, and that’s not true of [Swarthmore],” he said.

But if we do not face “bloat”, per-se, Burke does see interesting problems related to the question of governance at the College.

“There is I think a growing question about who’s driving the bus, in some cases, and about who ought to drive the bus, and where are certain kinds of imperatives coming from,” said Burke. Two examples for Burke of shifting, or potentially shifting, control and decision-making power are the Institutional Review Board and Middle States.

The IRB is a federally-mandated process for reviewing student and faculty research proposals that would involve human subjects. The College negotiates with the Federal Department of Health and Human Services to create guidelines and rules for our IRB. The IRB is one area, said Burke, where a turnover of control to the administration could be problematic.

“If you highly professionalize [the IRB]…  it’s a thing that strikes at the absolute heart both of faculty life, because it’s about supervising our research, the thing that defines us as scholars, and of the curriculum, because the IRB frequently concerns itself with student research,” said Burke. “And what’s one of the biggest promises we make to students in this curriculum that’s distinct to us, our size, our character, our aspirations? That you’ll get to participate in research.”

Middle States is an independent accreditation body for the Mid-Atlantic region. The organization supervises the evaluation of Colleges and Universities on a variety of metrics. According to Burke, Middle States has followed the nationwide trend in K-12 education towards higher standards of evaluation and accountability. These movements, said Burke, might cause problems for the College.

Another decision-making problem for Burke is the use of outside consultants. Hiring a consultant can be helpful for the college, Burke believes, when making a big decision with a gap in expertise or when there is a particularly high level of disagreement within the college. But consultancies can also be used to deflect criticism and push towards unproductive spending efforts.

“Consultancies carry the moral hazard of being able to outsource decision making to someone who won’t be there tomorrow,” said Burke. “The danger is that consultancies can sell us solutions that are not appropriate for us, because their expertise comes from some other kind of landscape like a big institution or business. And then the [consultants are] used to avoid a difficult conversation that we need to have anyway. That’s when it would be nice to have a leadership that is appropriately skeptical about the use of consultants.” On top of it all, Burke noted, consultants are expensive, and many consultants are more expensive.

Baumann is strongly skeptical of the side of administrative growth that involves a greater number of these “tasks.”

“Assessment is a big thing now,” said Baumann. “I’m very skeptical of the methods of assessing student progress that they’re trying to capture. They’re trying to capture things as if you can quantify or you could assign numbers. I think this is very raw and primitive, and I don’t believe we have any chance of assessing progress in the way in which people try to do it in the current assessment exercises.”

On a similar note, Baumann expressed concern that a task-based approach to problems of diversity would not be effective. “It’s hard for me to imagine for instance what a diversity requirement that really does its job could look like,” said Baumann. “It has to come from elsewhere. Do we need additional meetings for faculty to explain to faculty that we are diverse and that people are different? I don’t think that that will do anything but bore.”

While remaining skeptical of some of the above efforts, Burke recognizes that there are numerous areas in which more staffing, oversight and spending is necessary and, ultimately, good. Illustrating this point, he spoke of the Title IX changes the college has moved towards in past years.

“Title IX is a good example of where frankly both the activists and the federal government were right to push recalcitrant institutions to make reforms that they otherwise probably wouldn’t have made on their own,” said Burke. “Sometimes you have to listen, and have to professionalize, and have to hire, but in other cases maybe not. And that’s the conversation we need to have.” Burke noted, though, that the Title IX staff have been added with an eye towards institutional values, where the goal was “not to be driven entirely by compliance but to build a system that we felt comfortable with in our situation and our norms.”

Overall, Burke said, these are questions that deal directly with values and power rather than budgetary concerns. “It wouldn’t matter so much whether it was bloat or efficiency, that would be the wrong discussion to be having,” said Burke. “The discussion really would be who ought to be in charge, and what the role of the administration should be vis a vis these external compliance regimes… [And,] I think in many cases what the role of administrators should be is to defend our uniqueness, our distinctiveness, our aspirations, our values against those compliance regimes up to the extent that they can.”