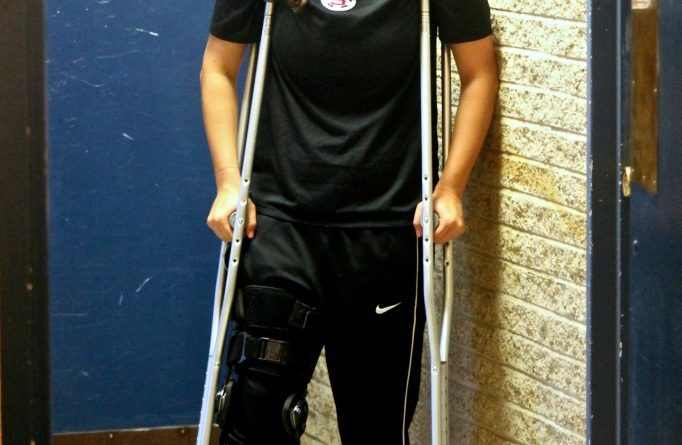 It all begins with a pop. When you tear your ACL, the first thing before the pain, before you realize what has happened, is the pop. Basketball player Jessica Jowdy ’16 recalls the moment when she got her injury, saying, “I was driving to the basket and went up for a jump shot when I made contact with another player and landed incorrectly. I felt a pop and for about 30 seconds, I felt excruciating pain.”

By the end of 2014, approximately 200,000 people will have injured their anterior cruciate ligament (ACL). The ligament, which lies right in the middle of the knee, is responsible for keeping everything in place. Last year, Swarthmore represented a contingent of those 200,000 injured people, and the memories and impacts of last year’s numerous ACL injuries remain.

Once you’ve had one tear, the feeling becomes immediately recognizable. Soccer player Cyrus Newlin ’16 has torn his ACL twice, once right before coming to Swarthmore — which kept him from playing his first season — and, frustratingly enough, again this past year at an away game at Stephens Institute. “I went in and five minutes later I took a funny twist and tore the other ACL. Since it was the second time I knew right away that it was torn,” said Newlin.

The first few agonizing moments of an ACL injury predict the pain of the ensuing surgery, recovery and rehabilitation processes. In the wake of an ACL tear, many players experience both mental and physical defeat because of their sudden inability to walk, much less play their sport.

An ACL injury is not pretty, before or after surgery. Right after getting the injury, the area around the ACL is incredibly swollen and there is little that doctors can do until the swelling goes down, which is why many ACL surgeries don’t happen until anywhere from 3 to 6 weeks after the ligament tears.

Then comes the surgery itself — maybe. Several Swarthmore athletes were initially misdiagnosed, and some waited for months to become fully aware of the extent of their injuries. To make matters more complicated, ACL injuries are often coupled with medial collateral ligament sprains and meniscus tears, creating a web of injury and increased potential for inaccurate diagnoses.

Wyatt McCall ’16, another soccer player, injured his knee in the fall only to wait many weeks until finding out what was actually wrong. “The MRI was initially inconclusive so my orthopedic surgeon back home decided to perform exploratory surgery to see if my ACL was actually torn. In early January, I had the surgery and they found that my ACL was irreparably stretched and was detached from my tibia. I had a patellar tendon graft to replace my ACL, which was very successful.”

Rugby player Ashlen Sepulveda ’17 had a similarly drawn-out diagnostic process. “I didn’t find out until 4 months after it happened. [The whole time] it was me hoping it wasn’t [an ACL injury].” In October, Sepulveda had a successful surgery, in which her ACL was replaced with a cadaver ACL.

Despite the success of many Swarthmore athletes’ ACL surgeries, the recovery process takes a toll on their bodies, minds, teams and everyday lives. After Sepulveda’s surgery, she had her mother come up to Swarthmore to help her with her recovery and counted on her close friends at Swarthmore to get her through weeks of being functionally immobile. “I didn’t know how I could do it without [my mom]. I couldn’t walk, shower or go to the bathroom by myself. It’s one of the scariest things ever because you have to rely on other people.”

An ACL injury is especially difficult to cope with because recovery takes at least nine months. The recovery timeline, in fact, was recently extended because the risk of getting a second ACL tear during physical activity after only six to eight months of recovery is significantly higher than was originally thought. McCall recalled some of the frustration, stating, “It’s a long recovery process, and I’m certainly getting anxious to get back out there.”

But while the process has been harrowing for many Swarthmore athletes, many have seen silver linings to having gotten the injury in the first place. “I feel like this whole experience has taught me patience and poise, which is critical in any stressful situation. Also, I believe I understand what it means to have a passion for something,” reflected Jowdy.

For Newlin, the injury taught him about working hard at healing. “Recovering from an ACL injury is about what you put into it. It’s a somewhat independent process by nature and some people put a lot of work and time into it and see the benefits of that,” he said. Even during a time when independence seems out of the question, the hard work of rehabilitating the body creates a space in which athletes can and need to push themselves, just like they did for their sports, but now, instead, for a healthy body.

It’s no secret that ACL injuries this year have been particularly numerous. It has also been natural, then, that these injured athletes have formed their own sort of community, both in and away from the training room. “People with braces and crutches just kept coming,” remembers Sepulveda of the time she spent in the training room just after her injury. Newlin has similar memories of creating bonds with increasing numbers of his fellow injured athletes, recalling, “It’s terrible how many injuries we’ve had, but it’s also good for injured players to have other people in the same boat … to have somebody to talk with on the sidelines.”

The injured athletes, however, don’t solely convene on the sidelines or in the training room. Because of the high volume of injuries, the trainers have organized support groups and Sharples group dinners for injured athletes.

The question of how there came to be so many ACL injuries this year at Swarthmore irrefutably hangs as a shadow over the heads of athletes, trainers and those in the athletic department. After ten years, the athletic department felt that the fields were due for a change, so in 2013, the fields were upgraded. The new turf, says Adam Hertz, Director of Athletics at the college, “[Is] the top quality for the newest generation of turf. It has a double layer … and we’ve come a long way in terms of technology.”

Hertz also emphasized that Swarthmore’s turf had nothing to do with the spike in injuries. “The first couple [injuries] were here and I started to panic and wonder if installation was bad, but there’s not a tear, no undulations — it’s just a bad year for us … I’ve talked to sports medicine offices and to others across the country and the answer is: ‘If anybody had an answer, they’d be rich,’” explained Hertz. Essentially, Hertz assured that despite speculation, including several players’ musings on the turf’s potential contribution to injuries during interviews for this piece, Swarthmore’s turf should not be associated with ACL injuries.

Some felt that the increase was not just attributable to a fluke or a “bad year” for injuries. “I think that athletics in general are more and more competitive and getting recruited to a Division III school is a huge achievement … [so] it’s more intense than it used to be,” said Newlin. Jowdy echoed Newlin, explaining, “I think that athletics is becoming more and more competitive and people are trying to push themselves to be better, whether it is getting stronger, faster or more agile. Unfortunately, this can sometimes put stresses and strains on your body that you cannot handle.”

A life shaped by an injury can be exasperating, particularly for a lengthy nine-month stretch of time. But through this hardship, Swarthmore athletes have found strength in relationships with friends, family, trainers, coaches, teammates and each other. No matter the cause of the explosion of ACL injuries, one thing has remained true: these injuries have reframed the appreciation that these athletes have for their sport, their mobility and, for many of them, their freedom from rehab, braces and their return to the court, field or pitch.