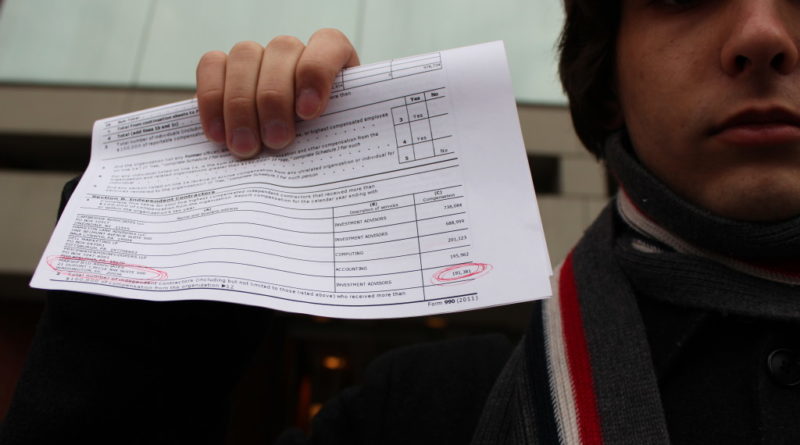 Earlier this month, I traveled to San Francisco State University, the first public university to commit to fossil fuel divestment, where I joined over 200 students from divestment campaigns around the country for the 2nd Annual Student Fossil Fuel Divestment Convergence.

The convergence focused on acting in solidarity with those on the frontlines of climate change and fossil fuel extraction, promoting an equitable transition away from fossil fuels, and maximizing our effectiveness as a movement by building connections between individual divestment campaigns. While there is inherent value in exposing students to emphasizing the intersectionality between issues, events like the convergence need to serve as a platform to integrate these concepts into our campaigns. The real success of the convergence, to me, is in how it laid the groundwork for students to meaningfully incorporate nationwide collaboration, solidarity and promotion of a just transition into our individual campaigns.

We spent much of the first two days grounding ourselves and connecting with the roots of the fossil fuel divestment movement, the frontlines. After all, it was a trip to witness the effects of mountaintop removal coal mining in West Virginia four years ago that prompted a group of Swarthmore students to form the first ever fossil fuel divestment campaign. From one campaign at Swarthmore, the movement has grown to include campaigns at over 400 colleges around the world. Yet, it remains important to remember that divestment is, at its heart, a solidarity tactic. Maintaining a focus on those most impacted by the fossil fuel industry is important in continuing to inform and drive our work. Travelling to West Virginia prompted me to join Mountain Justice and continues to motivate much of my work on divestment. Through fossil fuel divestment, institutions like Swarthmore can use our institutional privilege to act in solidarity by supporting those most impacted by the fossil fuel industry both in West Virginia and around the world.

Withdrawing our financial endorsement from the fossil fuel industry through divestment is only one part of solidarity — we also must support a just transition away from fossil fuels. The weekend’s panels and workshops focused on the intersectionality of different justice issues. They emphasized the opportunity we have to not only transition from fossil fuels to renewables, but create a more equitable society in the process. We can use fossil fuel divestment and purposeful reinvestment to help realize this vision. Instead of investing in fossil fuel companies that exacerbate existing economic and racial injustices, we can reinvest in positive solutions to climate change that can help realize a just and sustainable future.

At the Saturday evening plenary, Gopal Dayaneni of the justice and ecology group, Movement Generation, and Wahleah Jones of the Arizonan indigenous environmental group, Black Mesa Coalition, spoke about the need in their communities for that kind of just transition. Dayaneni asserted that we must not only change the type of energy that our society uses, but also change who benefits from its production. As we transition to an economy based on renewable energy sources we must create a more just and equitable economy in the process. Jones spoke about her Navajo tribe’s efforts to resist Peabody Coal’s mining on tribal lands. Peabody’s mining devastated their lands and drew three million gallons of clean aquifer water each day from an already parched desert region. Jones’ efforts have not ended at resisting Peabody; she is currently working to finance a utility-scale solar array on Navajo lands that could provide her tribe with much needed electricity and revenue.

As institutions of higher education, we can leverage our economic and political capital to not only transition from fossil fuels to renewables, but to create a more equitable society in the process. By divesting, we can undermine the fossil fuel industry’s social license, thereby threatening their bottom lines. Through reinvesting, we can actively promote the world we want to see.

Through investments in Community Development Financial Institutions (CDFI’s), renewable energy, and resiliency initiatives, we can use the money we divest from the fossil fuel industry to finance sustainable development in places like West Virginia a local transition away from fossil fuels. In doing so, we can move our money from companies that are wrecking the climate and help develop more equitable and resilient economies based on renewable energy.

With cooperation across the Fossil Fuel Divestment movement, we can build the power both on and off campus that we need to achieve these goals. The convergence itself is a testament to the connections that we have already built as a movement. The 2014 Convergence followed-up on the first student fossil fuel divestment convergence held at Swarthmore last year. Out of the 2013 Convergence, students from around the country formed the Divestment Student Network to foster collaboration across the country and plan future convergences to bring together students working on divestment.

Working together as a national movement, we have collaborated with others from across the climate justice movement to build power and affect politics. It was students in the DSN that organized the March XL Dissent protests in Washington DC, where 398 students were arrested urging President Obama to reject the Keystone XL proposal. The Obama administration recently extended the review period for the pipeline.

On March 31, 200 Boston-area students used connections between campaigns to organize a walk-out and rally outside Governor Deval Partick’s office in Boston, calling on him to support a bill to stop the construction of new fossil fuel infrastructure in the state. Governor Patrick is meeting with the students on May 2.

Divestment campaigns have extensively used the DSN to further our divestment campaigns on campus as well through pooling resources, strategy and experience. For instance, coordination between the five Claremont Colleges in California through the Claremont Colleges Divestment Campaign helped put the needed pressure on the Pitzer College administration to commit to divestment earlier this month. By the end of the year, Pitzer will be the largest college endowment fully (>99%) divested from fossil fuels. The movement is coordinating on a national level too. This past Tuesday marked the beginning of Beyond Earth Day, which is a two week period during which dozens of divestment campaigns will be taking coordinated action throughout the country. By acting together, we are building tighter connections, amplifying our message on social media, and intensifying pressure on our respective boards to divest fossil fuels and reinvest in a just and sustainable future.