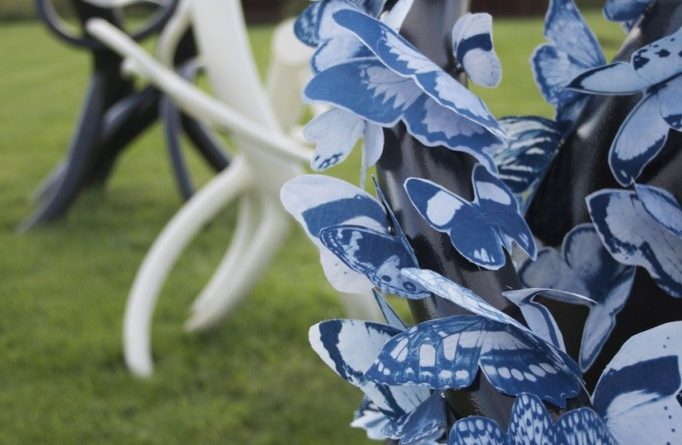 It’s a testament to a globalized society when an art project can span the globe. In an attempt to involve people from all over the world, Swarthmore alumna Tasha Lewis has unleashed a swarm of butterflies. Her project is to take her tiny creations to all corners of the globe through the use of social media.

Lewis creates thousands of magnetic, cloth butterflies through a process called cyanotype which involves using digital negatives printed onto fabric. Each butterfly sculpture is made out of recycled material and intends to invoke the light, flexible nature of butterflies that Lewis enjoys because it allows her to “combine things to create pieces with tactile depth and layers.”

But “Swarm the World” is more than just sculpture: it is also a street art project. It’s a modern-day piece combining the aspects of a globalized world, powered by the the re-tweet and re-blog and facilitated by the network of travelers. Lewis has been contacted by people from all over the globe who wish to take part in her project.

After selecting participants, Lewis places four hundred butterflies in each package and ships them off to volunteers in various parts of the world. For four weeks, the temporary

butterfly hosts travel around and place the butterflies in various public locations. They take pictures and take them down before shipping the butterflies on to the next location. Through various social media platforms, Lewis has been able to spread word about her project and receive support.

Lewis has been enthusiastic about this project and has been astounded by the amount of support she has received. “It is exciting to me that I am getting new emails every day from people all over the world who want to participate,” she said, “I don’t know if any of my later works will use social media in the same way, but I am very excited for this to be the capstone for my magnetic butterflies.”

Although this has extended into a global art project, “Swarm the World” started small, evolving from a fixed instillation into the free moving mass it is today. “It has been a very natural evolution. Like most things in art I didn’t know what the next step was going to be until I found myself staring it in the face. Once I have that epiphany moment I throw myself into it wholeheartedly,” she said.

Lewis started making these butterflies, during her time at Swarthmore. She presented them in shadow box displays that still reside on the second floor of Beardsley. During her time at Swarthmore, Lewis took a large breadth of studio art classes, which contributed to her artistic expression. Professor Randall Exon of the art department had Lewis in his classes since her freshman year. By her senior year, he said she was “achieving a unique set of technical skills while becoming quite sophisticated in critical and analytical skills.” Through her classes and a large amount of trial and error, Lewis has created her own form of artistic expression.

As she began to work more with the butterflies, she said, “I wanted to liberate them from behind the glass.” Once she returned home to Indianapolis, Lewis set to work liberating her work and placing displays of butterflies in public places. Lewis took the butterflies with her on a family trip and realized that her project and its purposes were enhanced by travel.

The project is unique in its breadth of involvement. As with most street art, the project hopes to interact with anyone who passes by and encourage those people to engage with the art. But she hopes to extend this premise into creating a community-wide project. “I have always been interested in engaging the people walking down the street who pass one of my butterfly installations, but this is the first project where I have sought to engage strangers through social media,” Lewis explained.

The butterflies themselves are highly representative as well. Lewis says “The butterflies for me signify nature as a whole. Perhaps more specifically the idea that plants will sprout up through cracks in the concrete and that wilderness will eventually take over abandoned buildings. I want them to invade the urban environment to remind people of that, to highlight a forgotten object, or just to change the daily routine of urban life.”

Lewis hopes to involve the Swarthmore community as well. She is currently searching for anyone who is traveling abroad next semester to take some of her butterflies with them. Lewis says she does not have many participants from Africa, Eastern Europe, or the Middle East and would love to be able to incorporate more participants from these areas.

The application is open until July 15. For more information about the project, read the participation requirements at swarmtheworld.com or email contact@swarmtheworld.com.