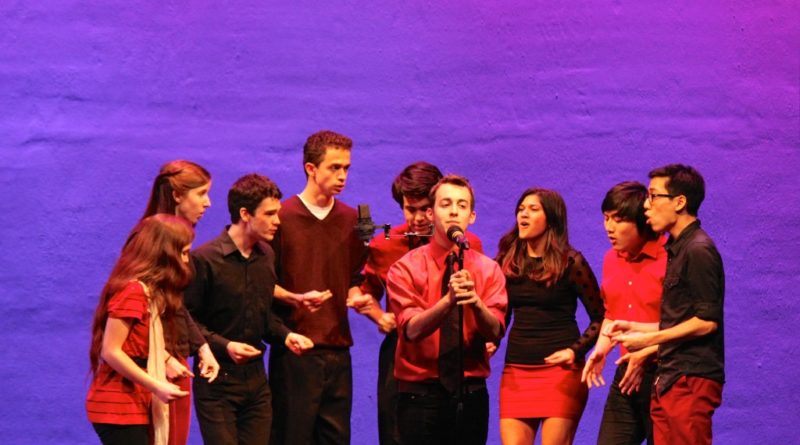 Last Friday, the Global Health Forum (GHF) held its annual Variety Show with performances from several student groups, featuring a capella, sketch comedy, and more. Proceeds from the Variety Show will go towards Shot@Life, a UN organization that provides vaccines to children worldwide. Along with Grapevine, Vertigo-go, and many others, hosts Claudia Lujan ‘15 and Randy Burson ’15 lent their own comedic talents to the show.

The night opened with a performance by the Mariachi Band. Sporting silver star-spangled fedoras, they played some traditional Mexican folk songs against a neon blue background. They went out with a bang, surprising the audience with an unexpected piece.

The opening act was followed by a moment of silence for the late Ravi Thackurdeen ’14. Ravi was a dedicated member of the Global Health Forum, a devoted student, and a sincere friend who tragically passed away while studying abroad in Costa Rica during the spring of 2012. He is remembered fondly by friends, classmates and teachers alike.

Following this moment, Swarthmore’s nationally competitive slam poetry team graced the audience with three performances. Maria Vietyez ’16 showed us that 3 a.m. is not a time, but rather, a place in her piece “Waiting For Sleep.” Kat Galvis ’17 performed a passionate address to family, country and homeland while relating her personal experience as an immigrant. Rose Wunrow ’16 spoke with warm admiration of the men in her family who have shaped her own self-identification.

After the poets read, performances alternated between a capella and comedy routines. First up was Grapevine, Swarthmore’s all women’s a capella group. The ensemble and soloists blew away the audience with performances of “Pompeii”, “Let’s Stay Together”, and Michael Jackson’s classic “Man in the Mirror.”

Verti-Go-Go then presented a man who, rather than being composed of 75 percent water, was made of 75 percent beer. The performance was quite a sight, but nothing next to the portrayal of runway model x-rays that couldn’t help but speak to doctor and patient while posing.

Mixed Company donned their signature red and black as they sang a capella arrangements of “Chicago,” “Can’t Get No Sleep”, and “Woods.” The animated soloists kept the audience’s attention glued to the stage, while the group’s harmonies left listeners entranced.

Sketch comedy troupe Boy Meets Tractor demonstrated the uselessness of a broken microwave in three sketches. Dimming lights only intensified the dim-wittedness of a particularly incompetent detective. She managed to incriminate herself before too much damage could be done. Meanwhile, the whole audience laughed.

Lastly, Swarthmore’s newest and largest acapella group Offbeat took the stage for the second time this year. Dressed in all black, the group performed a mashup of the recent hits “Brave” and “Just Give Me A Reason.” They ended the night with an explosive rendition of Macklemore and Ryan Lewis’ club banger “Can’t Hold Us.” Their performance made an exciting conclusion to a night of great music and great fun. But above all, it was a night of charity.

Donations towards Shot@Life may still be made. For more information, contact Claudia Lujan at clajun1@swarthmore.edu.